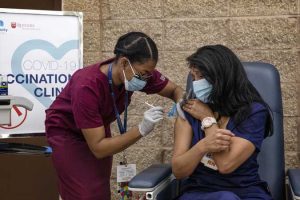 Soon, it was her colleagues at Newark’s University Hospital — the nurses, techs and doctors with whom she had been working side by side — who turned up in the ER, themselves struggling to breathe. “So many of our own co-workers got sick, especially toward the beginning; it literally decimated our staff,” she said.

By the end of June, 11 of Beniquez’s colleagues were dead. Like the patients they had been treating, most were Black and Latino.

Now Beniquez feels like a vanguard of another kind. On Dec. 14, she became the first person in New Jersey to receive the coronavirus vaccine — and was one of many medical workers of color featured prominently next to headlines heralding the vaccine’s arrival at U.S. hospitals.

It was a joyous occasion, one that kindled the possibility of again seeing her parents and her 96-year-old grandmother, who live in Puerto Rico. But those nationally broadcast images were also a reminder of those for whom the vaccine came too late. 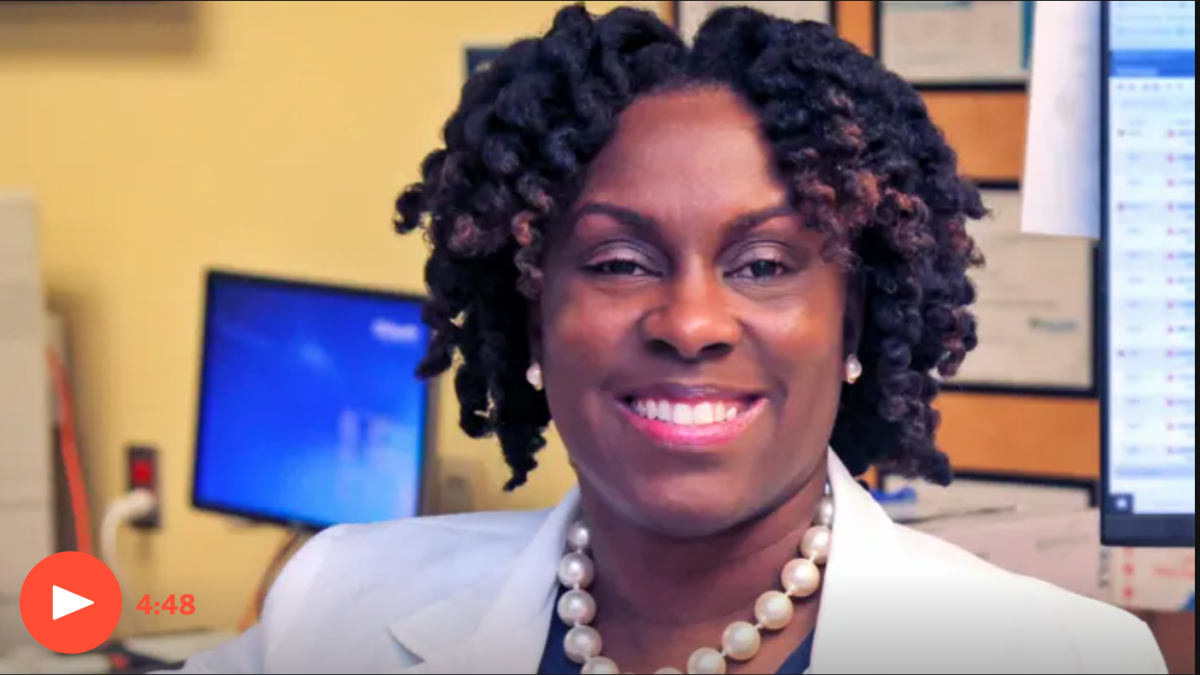 Video: The Healthy Nurse Who Died at 40 on the Covid Front Lines: ‘She Was the Best Mom I Ever Had’

Yolanda Coar was 40 when she died of COVID-19 in August 2020 in Augusta, Georgia. She was also a nurse manager, and one of nearly 3,000 frontline workers who have died in the U.S. fighting this virus, according to an exclusive investigation by The Guardian and KHN.

Covid-19 has taken an outsize toll on Black and Hispanic Americans. And those disparities extend to the medical workers who have intubated them, cleaned their bedsheets and held their hands in their final days, a KHN/Guardian investigation has found. People of color account for about 65% of fatalities in cases in which there is race and ethnicity data.

One recent study found health care workers of color were more than twice as likely as their white counterparts to test positive for the virus. They were more likely to treat patients diagnosed with covid, more likely to work in nursing homes — major coronavirus hotbeds — and more likely to cite an inadequate supply of personal protective equipment, according to the report.

In a national sample of 100 cases gathered by KHN/The Guardian in which a health care worker expressed concerns over insufficient PPE before they died of covid, three-quarters of the victims were identified as Black, Hispanic, Native American or Asian.

“Black health care workers are more likely to want to go into public-sector care where they know that they will disproportionately treat communities of color,” said Adia Wingfield, a sociologist at Washington University in St. Louis who has studied racial inequality in the health care industry. “But they also are more likely to be attuned to the particular needs and challenges that communities of color may have,” she said.

Not only do many Black health care staffers work in lower-resourced health centers, she said, they are also more likely to suffer from many of the same co-morbidities found in the general Black population, a legacy of systemic inequities.

And they may fall victim to lower standards of care. Dr. Susan Moore, a 52-year-old Black pediatrician in Indiana, was hospitalized with covid in November and, according to a video posted to her Facebook account, had to ask repeatedly for tests, remdesivir and pain medication. She said her white doctor dismissed her complaints of pain and she was discharged, only to be admitted to another hospital 12 hours later.

“If I was white, I wouldn’t have to go through that,” Moore said in the video posted from her hospital bed. “This is how Black people get killed, when you send them home, and they don’t know how to fight for themselves.” She died on Dec. 20 of covid complications, her son Henry Muhammad told news outlets.

Along with people of color, immigrant health workers have suffered disproportionate losses to covid-19. More than one-third of health care workers to die of covid in the U.S. were born abroad, from the Philippines to Haiti, Nigeria and Mexico, according to a KHN/Guardian analysis of cases for which there is data. They account for 20% of health care workers in the U.S. overall.

Dr. Ramon Tallaj, a physician and chairman of Somos, a nonprofit network of health care providers in New York, said immigrant doctors and nurses often see patients from their own communities — and many working-class, immigrant communities have been devastated by covid.

“Our community is essential workers. They had to go to work at the beginning of the pandemic, and when they got sick, they would come and see the doctor in the community,” he said. Twelve doctors and nurses in the Somos network have died of covid, he said.

Dr. Eriberto Lozada was an 83-year-old family physician in Long Island, New York. He was still seeing patients out of his practice when cases began to climb last spring. Originally from the Philippines, a country with a history of sending skilled medical workers to the United States, he was proud to be a doctor and “proud to have been an immigrant who made good,” his son James Lozada said.

Tell Us A Health Worker’s Story

Do you know of a colleague or loved one who should be included in the “Lost On The Frontline” series? Please share their story.

Lozada’s family members remember him as strict and strong-willed — they affectionately called him “the king.” He instilled in his children the importance of a good education. He died in April.

Two of his four sons, John and James Lozada, are doctors. Both were vaccinated last month. Considering all they had been through, John said, it was a “bittersweet” occasion. But he thought it was important for another reason — to set an example for his patients.

The inequities in covid infections and deaths risk fueling distrust in the vaccine. In a recent Pew study, around 42% of Black respondents said they would “definitely or probably” get the vaccine compared with 60% of the general population.

This makes sense to Patricia Gardner, a Black, Jamaican-born nursing manager at Hackensack University Medical Center in New Jersey who has been infected with the coronavirus along with family members and colleagues. “A lot of what I hear is, ‘How is it that we weren’t the first to get the care, but now we’re the first to get vaccinated?’” she said.

Like Beniquez, the nurse in Newark, she was vaccinated on Dec. 14. “For me to step up to say, ‘I want to be in the first group’ — I’m hoping that sends a message,” she said.

Beniquez said she felt the weight of that responsibility when she signed on to be the first person in her state to receive the vaccine. Many of her patients have expressed skepticism over the vaccine, fueled, she said, by a health system that has failed them for years.

“We remember the Tuskegee trials. We remember the ‘appendectomies’” — reports that women were forcibly sterilized in a U.S. Immigration and Customs Enforcement detention center in Georgia. “These are things that have happened to this community to the Black and Latino communities over the last century. As a health care worker, I have to recognize that their fears are legitimate and explain ‘This is not that,’” she said.

Beniquez said her joy and relief over receiving the vaccine are tempered by the reality of rising cases in the ER. The adrenaline she and her colleagues felt last spring is gone, replaced by fatigue and wariness of the months ahead.

Her hospital placed 11 trees in the lobby, one for each employee who has died of covid; they have been adorned with remembrances and gifts from their colleagues.

There is one for Kim King-Smith, 53, the friendly EKG technician, who visited friends of friends or family whenever they ended up in the hospital.

One for Danilo Bolima, 54, the nurse from the Philippines who became a professor and was the head of patient care services.

One for Obinna Chibueze Eke, 42, the Nigerian nursing assistant, who asked friends and family to pray for him when he was hospitalized with covid.

“Each day, we remember our fallen colleagues and friends as the heroes who helped keep us going throughout this pandemic and beyond,” hospital president and CEO Dr. Shereef Elnahal said in a statement. “We can never forget their contributions and their collective passion for this community, and each other.”

Just outside the building, stands a 12th tree. “It’s going to be for whoever else we lose in this battle,” Beniquez said.

This story is part of “Lost on the Frontline,” an ongoing project from The Guardian and Kaiser Health News that aims to document the lives of health care workers in the U.S. who die from COVID-19, and to investigate why so many are victims of the disease. If you have a colleague or loved one we should include, please share their story.