Home » Health News » David Niven: ‘It was a relief when he died’ – star’s long battle with Lou Gehrig’s disease

David Niven: ‘It was a relief when he died’ – star’s long battle with Lou Gehrig’s disease 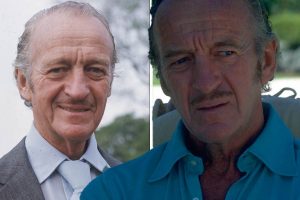 The Oscar-winning actor passed away after a lengthy battle with the debilitating disease which affects nerve cells in the brain and spinal cord. Passing away “peacefully and without pain”, the actor lost the power of his speech and the use of his left hand, which are common symptoms as the condition takes over an individual’s body and muscle movements. The MDA, a charity supporting those with the condition, explains that the word “amyotrophic” means “without nourishment to muscles” and refers to the loss of signals nerve cells normally send to muscle cells. “Lateral” means “to the side” and refers to the location of the damage in the spinal cord. And finally “sclerosis” means “hardened” and refers to the hardened nature of the spinal cord in advanced ALS.

On Monday 28th July 1983, the day before David’s 73rd birthday, press agent Theo Cowan claimed that Niven was not seriously ill, in order to try and avoid unwanted media attention.

At the time his statement read: “We’ve been told he’s in for a checkup for a digestive disorder and that he’s progressing really quite well. He certainly went through a time when he wasn’t in good health, but he has been getting steadily better.”

However, Niven’s wife Hjördis Niven, told a different story, with the press able to quickly decipher the name of the disease that would go on to kill the actor.

Speaking about Niven, Hjördis said that he was “tired and very weak” as a result of his “wasting disease of the muscles”.

Hjördis added: “He can still speak, but not very well, and he has lost some of the use of his left hand… I have not flown in because there is a great crisis.”

A few months later Hjördis provided eager journalists with another update about the star, saying: “One of the main reasons he went into the hospital was to put on some weight. He’d lost a lot of weight because since last October, he’d been on a very rigid diet he’d devised himself, thinking it would be better for his health if he were to control what he ate.

“His voice is his biggest problem because he gets very tired after speaking for five or ten minutes. But David loves to talk for hours and hours. He still goes on and on except he can only do it in short spurts. That’s the thing that annoys him most.

“David is battling on, nothing gets him down. He’s living more or less like before. He doesn’t have to spend any specific amount of time in bed every day. His medical regime is more or less his own invention. When he’s tired he sleeps, and when he feels fine he goes for walks.”

It was within a few months of her statement that Niven sadly passed away, a reality that the actor reportedly knew was coming for at least four months prior.

“Frankly it was a relief when he died,” his son David Jr later admitted. “If you love someone, the last thing you want is to see them suffer. For two years he couldn’t swallow so he just got thinner and thinner and he couldn’t talk.”

ALS is often referred to as Lou Gehrig’s disease, after the American baseball player who was diagnosed with it. But in reality, the condition is the most common form of motor neuron disease.

It typically affects individuals in later life, around their late 50s, but has been known to occur in young adults as well as some very elderly people. It is believed to occur in one to three people per 100,000 every year.

MDA explains that the cause of the condition is still relatively unknown, but current theories suspect that it is due to genetics. In fact, some individuals may be genetically predisposed to developing the disease but do so only after coming into contact with an environmental trigger. It is this interaction of genetics and environment that may hold clues as to why some individuals develop ALS.

It is important to note that despite the suspected connection with genetics, ALS does not seem to run in families, with the onset of the condition often being sporadic. Only about 10 percent of cases are familial.

What are the symptoms of ALS?

As the disease progresses, ALS causes muscles to reduce in size. This often causes muscle twitches and cramps which can become “irritable”.

Symptoms may be limited to a single body region, or mild symptoms may affect more than one region. When ALS begins in a region known as the bulbar motor neurons, which is localised in the brainstem, muscles used for swallowing and speaking are affected first.

Symptoms then become more widespread with some becoming completely paralysed and others only weakened.

Interestingly, involuntary muscles, such as those that control heartbeat, the gastrointestinal tract and bowel, bladder, and sexual functions are not directly affected in ALS. Sensations, such as vision, hearing, and touch, are also typically unaffected.

As many as 50 percent of people develop some degree of cognitive or behavioural abnormalities, which is an important factor in first spotting signs of the disease. In fact, the first signs and symptoms of ALS may include:

Current treatments for ALS help to slow the progression of symptoms and prevent further complications, allowing individuals to remain independent for longer. These treatments are largely medication based, but therapies can also help with breathing, speech and moving.