Dementia patients’ fridges and beds could be fitted with sensors 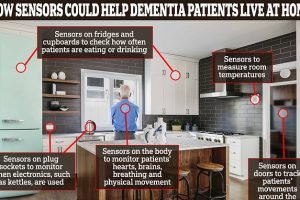 Fridges, kettles and beds could be fitted with SENSORS in dementia patients’ homes to track their health and keep them out of hospital

Networks of electronic sensors could be used to help dementia patients stay living independently in their own homes.

Scientists believe monitoring how patients move round their house, how much they sleep, eat and drink, and their vital signs could all help keep them safe.

Robotic devices could even warn patients when they have spilled liquid on the floor or left the cooker on could help to keep them away from danger.

Using electronic devices to do this without interfering with their day-to-day life could keep them out of hospitals or care homes for longer, the researchers said.

A ‘ground-breaking’ £20million research centre will be opened in London this year to develop the high-tech gadgets to care for dementia patients. 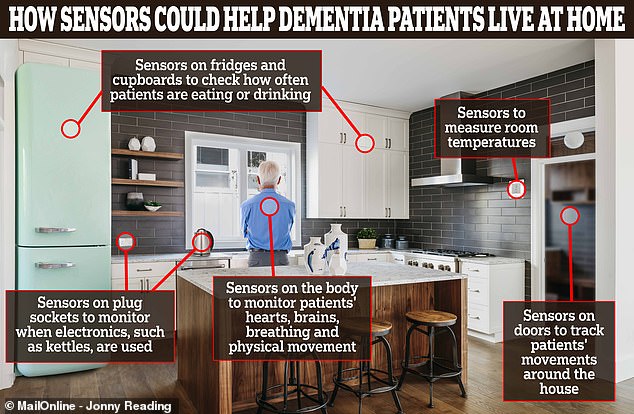 The Care Research and Technology Centre will open as a combined project between Imperial College London and the University of Surrey.

The devices will all be tested by dementia patients and their carers at the centre, which will be funded with the help of charities.

‘The vision for this centre is to use patient-centred technology to help people affected by dementia to live better and for longer in their own homes,’ said Professor David Sharp, a neurologist who will be head of the centre.

He believes doctors could be prescribing patients with technology like this within the next 10 years.

He said: ‘The GP might have a dashboard of different apps or different ways of engaging with people that they select, and then give a personalised package of apps that are particularly relevant to individuals.

‘You might have your dementia engineer come over and deploy the technology into your home, and that would provide the kind of information that we are talking about.

WHAT SENSORS COULD DEMENTIA PATIENTS HAVE IN THEIR HOMES IN THE FUTURE?

Sensors placed under patients’ mattresses could record how well and how often people sleep, for example, and record data which can be given straight to a specialist doctor.

Others on fridges, kettles and cupboards could monitor their eating habits, while atmosphere sensors could record room temperatures.

Data collected by this network of sensors could then be used to feed back real, precise information to patients’ doctors.

This would allow them, the researchers said, to form an accurate picture of someone’s day-to-day life and adapt their care accordingly.

‘So this may sound like science fiction, but I think many of the elements of this are in place.’

Sensors placed under patients’ mattresses could record how well and how often people sleep, for example, and record data which can be given straight to a specialist doctor.

Others on fridges, kettles and cupboards could monitor their eating habits, while atmosphere sensors could record room temperatures.

Data collected by this network of sensors could then be used to feed back real, precise information to patients’ doctors.

This would allow them, the researchers said, to form an accurate picture of a patient’s day-to-day life and adapt their care accordingly.

Professor Sharp added the technologies ‘will allow us to intervene at an early stage, to prevent the crises that so often lead to hospital stays, or a move to a care home’.

He said: ‘Latest figures suggest one in four hospital beds are occupied by people with dementia.

‘And 20 per cent of these admissions are due to preventable causes such as falls, dehydration and infections.

‘The new technologies we develop will improve our ability to support people in their homes.’ 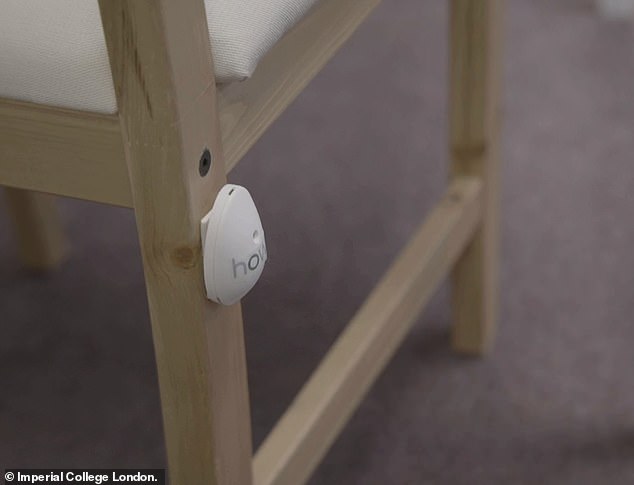 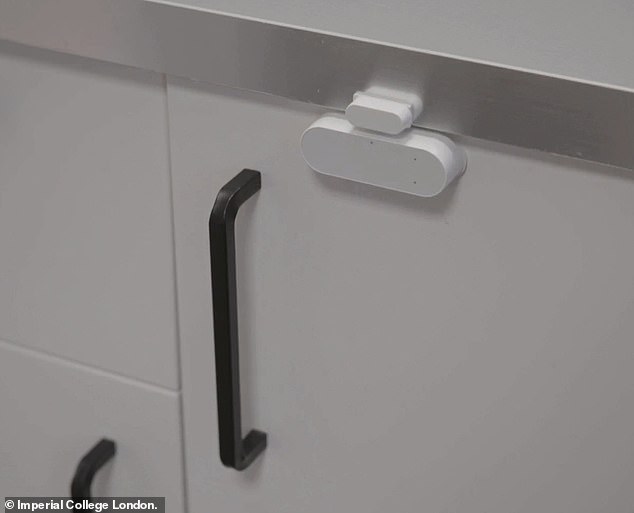 Cupboards, fridges and kettles could also be fitted with sensors to record how often patients eat and drink – dementia patients are at risk of forgetting to drink enough water, which can cause more serious health problems

Another suggested home device is a quick DIY test for common infections which could be used by carers to potentially avoid GP or hospital visits.

The Medical Research Council, the Alzheimer’s Society and Alzheimer’s Research UK – which make up the UK Dementia Research Institute – will chip in to fund the £20m development.

Around 850,000 people in the UK have dementia, which damages their memories, thinking and communication skills, muscle control and moods.

It cannot be cured and is ultimately fatal but many people – most over the age of 65 – live for years with the condition.

Professor Payam Barnaghi, University of Surrey professor and deputy director of the new centre, said: ‘The technologies involved in this project will enable people to live independently at home whilst not sacrificing their care.

‘Working with the latest machine learning capabilities means the technology we’re using will be able to get better at spotting warning signs and events that require intervention.

‘Doctors will be able to have confidence in their ability to monitor people remotely and to react quickly to any worrying changes.

‘Improving the quality of life of people with dementia is crucial to their and their families overall wellbeing.’

WHAT IS DEMENTIA? THE KILLER DISEASE THAT ROBS SUFFERERS OF THEIR MEMORIES

Dementia is an umbrella term used to describe a range of progressive neurological disorders, that is, conditions affecting the brain.

There are many different types of dementia, of which Alzheimer’s disease is the most common.

Some people may have a combination of types of dementia.

Regardless of which type is diagnosed, each person will experience their dementia in their own unique way.

Dementia is a global concern but it is most often seen in wealthier countries, where people are likely to live into very old age.

HOW MANY PEOPLE ARE AFFECTED?

The Alzheimer’s Society reports there are more than 850,000 people living with dementia in the UK today, of which more than 500,000 have Alzheimer’s.

It is estimated that the number of people living with dementia in the UK by 2025 will rise to over 1 million.

In the US, it’s estimated there are 5.5 million Alzheimer’s sufferers. A similar percentage rise is expected in the coming years.

As a person’s age increases, so does the risk of them developing dementia.

Rates of diagnosis are improving but many people with dementia are thought to still be undiagnosed.

IS THERE A CURE?

Currently there is no cure for dementia.

But new drugs can slow down its progression and the earlier it is spotted the more effective treatments are.