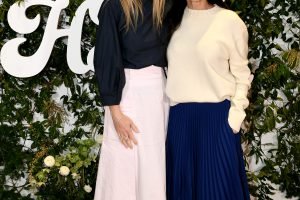 Demi Moore opened up about how she’s changed her life over the last seven years.

Speaking to Gwyneth Paltrow and Arianna Huffington at the 2019 In Goop Health summit, the actress said that she’s shifted her priorities to refocus on her health and the people around her in the “last seven years.”

“My relationships are more important, and what I do comes second,” Moore, 56, said at the New York City event on Saturday.

Moore added that she no longer looks outwards for validation.

“What does it matter what anyone thinks?” she said. “Nothing is that bad.”

This new outlook came after “my health took me down,” Moore said, referencing her 2012 collapse at her home. The mom of three was hospitalized after the incident and entered a rehab treatment for addiction and an eating disorder, sources told PEOPLE at the time.

And when Paltrow, 46, asked what the two panelists teach their daughters about growing up in the world today, Moore said improving herself has an effect.

“I feel like the more that I work on myself it’s automatically imparted because that’s how I’m living, and I don’t have to work as hard to show them or teach them,” she said.

“I already think they’re more evolved and more confident and less apologetic for who they are and the space that they’re taking,” Moore said. “I think I’m getting more insights from them than I’m giving.”

Paltrow, Huffington and Moore also touched on dealing with technology and social media, with Huffington saying that the “growing addiction” to phones is “a crisis.”

“We need to set boundaries,” she said. “We need to put down our phones and connect with ourselves and our loved ones.”

Moore agreed, adding that it’s “hard enough to be a young person” without the pressures of social media, and that her daughters were affected.

“My children were the first generation that were put under the microscope, and my kids are battling huge self-esteem issues because adults in an anonymous forum commented saying they were ugly,” she said. “It’s devastating as a parent.”

Moore continued: “I was at a birthday party that you [Paltrow] were at also that said ‘no phones,’ and it was so great because everyone was dancing and connecting and listening to the music and laughing, and no one was trying to have the experience and post the picture. It is a discipline. It’s a beautiful tool that can be used in a powerful way, but it shouldn’t be a marker for our place in the world.”