Home » Health News » Dine out or eat in during the coronavirus crisis? Here’s what public health and food safety experts say

Dine out or eat in during the coronavirus crisis? Here’s what public health and food safety experts say 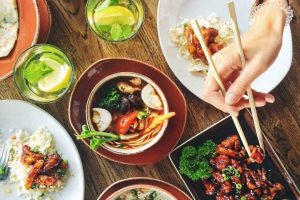 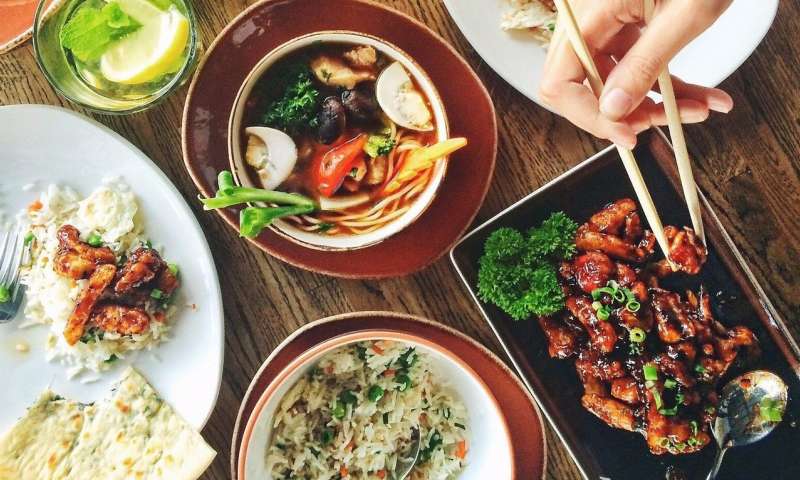 Not on the menu for many these days: Dining out.

As our fears of catching the coronavirus grow by the day, so has our hesitation to venture out of the house, especially now that COVID-19 has been officially classified as a pandemic by the World Health Organization.

A party of one, two or four around the kitchen or dining room table is sounding a lot more appeal to many people than communal meals in restaurants. “I’ll have what they’re having” is starting to take on an ominous meaning.

One-third of Americans say they plan to stick closer to home and dine at restaurants less frequently, according to restaurant industry research group Technomic.

Until a week ago, John Sanger, 40, a software developer and military veteran living in Orlando, Florida, went out to eat almost daily. Now, he’s working from home and he’s stopped going to restaurants or ordering in food, opting instead for prepared meals. He shops for groceries at Walmart in the wee hours to avoid crowds.

“I’m trying to minimize my contact with other people,” said Sanger, a keyboardist who shops for groceries at Walmart in the wee hours to avoid crowds and has stopped meeting up with friends or practicing with his band.

Aleka Gürel says she was already an avid home cook but is using the recommendation from public health officials to practice social distancing “as an excuse to stay in and cook more.”

Gürel, who lives in San Francisco and works at HealthSherpa, an online broker authorized to sell Affordable Care Act plans, stocked up on dry beans, lentils and chickpeas and pulled together her favorite recipes that rely on pantry staples which she shared in a blog post on “home cooking in the time of coronavirus.”

“I hope it encourages people without much cooking experience to try new things, especially if they have to self-quarantine and are stuck home for a long time,” Gürel says.

Tabitha Banks, 49, an investment operations analyst from Atlanta, Georgia, decided to stop eating out Wednesday after reading reports that a Waffle House employee and a Walmart employee had tested positive for the coronavirus. She doesn’t love to cook so she’ll be making one-pot meals in her crock pot that can last a couple of days.

Not everyone is ready to start skipping restaurant meals just yet. Is it safe to dine out? Or is eating in the way to go now? We got the lowdown from public health and food safety experts.

Public health experts say it’s safe to dine out as long as you take precautions such as frequently cleaning your hands with soap or hand sanitizer and staying at least three feet away from anyone who is coughing or sneezing.

“As things stand today, based on the information we have from the Centers for Disease Control and information from local and state public health officials, I don’t see any basis for recommendations that people not dine out,” says food safety expert Benjamin Chapman, a professor at North Carolina State University.

Coronavirus is a respiratory illness spread through droplets, from a cough or sneeze, to someone else’s nose or eyes. There’s no evidence that the illness is transmitted through food, says Craig Hedberg, a University of Minnesota professor and an expert on food-borne illness.

“One of the concerns that everybody has is if you are out in the public and you are in close proximity with other people, are you going to be exposed to potential respiratory secretions,” he says.

Taking precautions, you can continue to dine out with fairly minimal risk, Hedberg says. But that recommendation does not apply to people in high-risk groups who are being advised by the CDC to avoid crowds.

Older people and those with underlying conditions in areas where the virus is spreading should take steps to keep their distance from others and stay home as much as possible, and that includes eating out, says Leana Wen, an emergency physician and visiting professor of health policy and management at George Washington University’s Milken School of Public Health and a former health commissioner for the city of Baltimore.

Young and healthy individuals can continue to eat out if they take the recommended precautions, public health experts say.

If you are unsure whether it’s safe to eat out, consult the latest information from your local and state public health officials and from the CDC.

“Follow the advice of your local public health official, we can’t give blanket advice because communities and people are so different,” Wen says.

The more we learn about the coronavirus and the farther it spreads, recommendations may change.

Public health experts urge everyone to stay tuned to the latest information from local public health officials and the CDC. Recommendations will vary depending on the current conditions in your local community.

“As cities and states experience more cases and cases that can’t be linked to other known sources of exposure, it increases the likelihood that we will see unrecognized chains of transmission,” Hedberg says. “Community spread of the virus may increase the need to reduce your exposure in public settings.”

Pro tips for dining out

Coronavirus is not known to be transmitted through food, but hard surfaces—utensils, menus, salt and pepper shakers, condiments, door handles, tables—can be contaminated by droplets. So, throughout your meal, each time you touch something—the menu while ordering or the ketchup bottle when loading up your burger—avoid touching your face or eating until you wash your hands or rub them with hand sanitizer.

“One of the biggest benefits we have with this virus is that hand sanitizer is really effective against it and hand washing is a good protective measure,” Chapman says.

Public health experts say it’s critical that anyone who is feeling sick should not set food in restaurants to avoid exposing patrons and staff.

“One of the main messages I want to send to people is: If you are not well, you should stay home,” Hedberg says. “If you go out and there are people coughing and sneezing around you, that would make you a little uncomfortable. To be fair to the other people in the restaurant, you should not be there.”

On Tuesday, MGM Resorts International announced it would shut down buffets on the Las Vegas Strip starting Sunday. The buffet closures at popular hotels including Bellagio, MGM Grand, Mandalay Bay, The Mirage, Luxor and Excalibur are temporary and will be evaluated on a weekly basis, MGM Resorts said.

Chapman says restaurants don’t have to put the kibosh on buffets, but they should take precautions. After all, those protective plexiglass shields are called “sneeze guards” for a reason.

“I do think there are ways to manage buffets safely,” he says. For example, restaurants could staff buffets with food servers “kind of like the cafeteria line in school” instead of patrons serving themselves with tongs, he says.

If you are nervous, ask an employee to serve you or ask for protective gloves. And don’t handle serving utensils at a buffet and then touch your face until you wash your hands or use hand sanitizer.

Is delivery less risky than dining out?

The short answer is yes. The CDC is advising people at high risk in outbreak areas to have food brought to the house by family members or friends or by delivery services.

A number of services including Postmates and Doordash are letting customers request that deliveries be left on the doorstep to limit exposure even more. Doordash drivers are being advised to clean their cars and hot bags and urged to stay at home if they feel sick especially if they are suffering from respiratory symptoms.

Larry Lynch, senior vice president of certification and operations for the National Restaurant Association, said his group is advising restaurants to pay closer attention to drivers and make sure they aren’t showing any symptoms before they go out on delivery runs.

“I think contactless delivery is a good alternative,” Chapman says. But, again, be sure to wash your hands after handling the packaging, though “we don’t really have a good sense that packaging is a good place to transfer this pathogen,” he says.

Should you worry about infected food service workers?

Diners are understandably concerned about being exposed to ailing food service workers who prepare and serve so much of the food we eat every day.

“As far as we know, the coronavirus is not transmitted by a fecal or oral route and it’s extremely unlikely to get the disease from someone with the infection who is preparing food,” Wen says. “But it’s still good to take precautions when dining out.”

Restaurant industry groups say they are advising members to make sure their staffers are not coming to work sick. The CDC says 1 in 5 food service workers have admitted going to work at least once in the previous year with symptoms such as vomiting and diarrhea.

Restaurants: We’ve got this

The top two ways that patrons want restaurants to respond to the coronavirus, according to Technomic: Give sick employees time off and follow proper sanitation procedures.

The food service industry is heavily regulated by health officials and has had protocols in place for decades to prevent food-borne diseases such as norovirus, which causes nearly 60% of all foodborne illness outbreaks.

“The restaurant industry is really prepared for this. Because of influenza, norovirus, hepatitis-A and other viruses, they spend a lot of time thinking about this in the restaurant industry,” Chapman says. “A lot of thought has been put into regulations and operating procedures.”

Restaurants across the country say they are doubling down on cleaning procedures and instituting new ones to keep customers and employees safe.

In San Francisco, Word. A Cafe has rearranged its dining room to keep tables five feet apart wherever possible and it’s encouraging diners to take food home or outside. It’s also waiving all charges for take-out packaging. Order ahead and staff can deliver your food curbside.

“We hope this is taken as a signal to our community that we value the health of everyone who comes through our doors,” owners Carl Hall and Kat Anderson said in an email.

Many restaurants are increasing the number of hand sanitizer dispensers, cleaning shared serving utensils more frequently, wiping down chairs and tables after each use with fresh cleaning cloths or disposable towels and disinfectants that the Environmental Protection Agency says are effective against COVID-19, and sanitizing other high-touch surfaces more often.

Lynch says the National Restaurant Association has suggested restaurants provide hand sanitizer and tissues to patrons to add to their “comfort level.” Concerned patrons should also ask the restaurant manager what additional safety measures are being taken, Lynch said.

END_OF_DOCUMENT_TOKEN_TO_BE_REPLACED

END_OF_DOCUMENT_TOKEN_TO_BE_REPLACED
We and our partners use cookies on this site to improve our service, perform analytics, personalize advertising, measure advertising performance, and remember website preferences.Ok