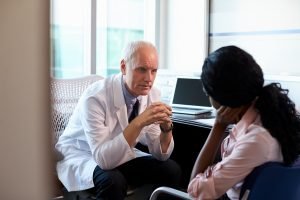 In recent years, there's been a sharp rise in colorectal cancer cases among younger adults — and their doctors may be missing signs of the disease, a new study finds.

People under age 50 are more likely to be diagnosed with more advanced stages of colorectal cancer compared with older adults, according to the study.

The study found that many younger adults see several doctors before receiving a correct diagnosis. The findings were presented yesterday (Feb. 27) in a news conference previewing next month's American Association for Cancer Research (AACR) meeting in Atlanta. [7 Odds Things That Raise Your Risk of Cancer (and 1 That Doesn't)]

The study was based on a survey distributed on social media last summer to colorectal cancer patients under age 50. (The researchers also included people in the same age group who had been treated for the cancer.) Nearly 1,200 people participated — 57 percent of whom were diagnosed between ages 40 and 49; 33 percent diagnosed between ages 30 and 39; and 10 percent diagnosed before age 30. Most of the participants were white women.

The researchers found that 71 percent of the participants had been diagnosed with stage III or IV colorectal cancer (these are the two later stages of the disease) and that 63 percent had waited three to 12 months to see a doctor after their symptoms began. Whereas older adults are typically diagnosed when the cancer is in its earlier stages, according to a statement from the AACR.

What's more, two-thirds of the participants said that they saw at least two doctors before receiving their colorectal cancer diagnosis, and some saw as many as four doctors. Of the patients who saw only one doctor, half claimed that they were initially misdiagnosed, Ronit Yarden, one of the study's researchers and the director of medical affairs at the Colorectal Cancer Alliance, an advocacy group in D.C., said during the news conference today.

One explanation for this could be that symptoms of colorectal cancer — such as constipation, weight loss and fatigue — can be similar to other conditions, Yarden noted.

In addition, colorectal cancer is often thought of as a cancer that affects older adults, Yarden said. Indeed, most guidelines, like those of the U.S. Preventive Services Task Force, recommend that average-risk adults between ages 50 and 75 undergo regular screenings for it — but not adults younger than 50. But of new diagnoses of colorectal cancer, 1 in 10 is among those younger than age 50, she said.

"Both the medical community and the general population should be aware that colorectal cancer — which is one of the most preventable disease — could happen in young adults," she said. "Symptoms should not be dismissed at any age and screening should be extended."

The findings have not yet been published in a peer-reviewed journal.