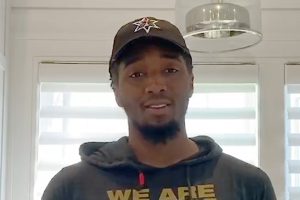 As the shooting guard for the Utah Jazz, NBA player Donovan Mitchell always has to be in shape. Men’s Health recently chatted with the basketball star to talk about his diet and how it helps keep him game-ready.

Mitchell’s morning typically starts out by drinking the first of eight bottles of water that he drinks throughout the day. He also prefers to drink ginger tea for his morning beverage, because he isn’t the biggest fan of coffee. Mitchell will indulge himself in a hearty breakfast of pancakes, eggs, and turkey bacon.

Then comes the training. On a workout day, Mitchell spends 45 minutes in the weight room. But he also has a secret weapon to ensure that he gets the most out of his fitness routine, and it’s something that his trainers gave him. “I drink 1-2 cups of BeetElite,” he says. “The Jazz training staff introduced me to it and I really fell in love with having that pre-workout.” Once his workout is over, he tends to go for a healthy smoothie, which he had to learn to make after a slight mistake in his rookie years.

“I used to go to certain stores that have sugar smoothies and I thought were healthy for me—they weren’t,” Mitchell says. “I ended up having my chef help me out and get me some healthy smoothies, and I think that’s really helped me.” His favorite smoothie ingredients include apples, oranges, and some basic yogurt.

When it comes to lunch, Mitchell tries to keep it simple by eating grilled chicken and pasta. But he does have an interesting deal with his personal chef about trying new foods. “There are times where there are things I don’t like, but I tell my chef to put them in there,” he jokes. “Just don’t tell me what they are!” Mitchell just started to appreciate spinach.

It’s dinner where the NBA player eats his favorite foods. He particularly loves sweet potatoes and duck. “Duck is something I really fell in love with,” he says. “My chef cooks it, prepares it, and he does a really great job.”

It’s particularly important for Mitchell to make sure that he sticks to his perfected routine, because he can’t risk feeling heavy or bloated on the court.

“The biggest thing I see athletes do is go through hills, going down and then picking back up,” he says. “I think for me, it’s easiest when you just stay at a consistent basis with little peaks. Those are things that I put my focus into as I got into the NBA and really understand my body.”

And do that point, Mitchell tries to stay away from anything fried and candy, though he’s tempted by anything in gummy form.

END_OF_DOCUMENT_TOKEN_TO_BE_REPLACED

END_OF_DOCUMENT_TOKEN_TO_BE_REPLACED
We and our partners use cookies on this site to improve our service, perform analytics, personalize advertising, measure advertising performance, and remember website preferences.Ok