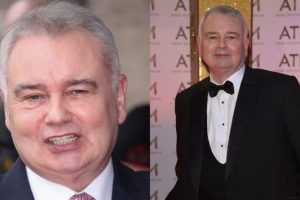 Presenting legends Eamonn and Ruth were replaced from their regular Friday show slot by Dermot O’Leary and Alison Hammond, meaning that the TV regulars found themselves taking a break from hosting duties. This is not the first time that Eamonn has had to take a break from the show, as he took a leave of absence due when suffering with a painful health condition. The presenter had no idea what had appeared on his face on the morning in question, and this was not helped after talking to his doctor who replied: “‘Get down here to let me see it’”.

On discovering the condition, Eamonn described it as a “horror movie”. The painful sores, which resemble cold-sores, were causing a stabbing sensation on his face.

Talking about the incident he said: “I literally jumped back at my image shouting ‘what the heck is this?’“It was like waking up in a horror movie.

“When I called my doctor and said it was on my face the first question was, ‘Is it near your eyes? Don’t touch your eyes because it could affect your vision – you could go blind. Get down here to let me see it’. It was panic stations.”

The NHS explains that the first signs of shingles include a tingling or painful feeling in the infected area of skin and a headache, accompanied by a general feeling of illness.

A few days later a rash will appear, usually on your chest or tummy but it can appear anywhere – including on the face and around the eyes like Eamonn’s.

When looking back on his ordeal with the condition Eamonn had “no doubt” that it was triggered by stress.

He said: “HM Revenue & Customs had decided to challenge my status as a freelancer [claiming he was an employee of ITV and therefore liable to pay more tax], so we had just been to court.

“It was the most horrendous experience of my life, outside my father dying suddenly 30 years ago. A week of absolute bullying and harassment. It was like being clubbed. I was absolutely drained so, low and behold, I developed shingles.

“It was incredibly painful and exhausting, and I had to take time off work to recuperate. I couldn’t have gone on telly like that. There isn’t a camera filter in the world that could have made me look better.”

If things could not get any worse for the star, during the time he was diagnosed with the condition his eldest son Declan was due to be married.

Commenting on this Eamonn added: “It was the first wedding in the family, but it really had an impact on the day. I looked awful. I had makeup all over my face trying to pretend everything was fine, but my eyes were just two slits.”

Usually only affecting one small area of the body, the rash is formed of fluid-filled blisters that often break open and become extremely itchy. Similar to chickenpox, the virus is extremely contagious and individuals with it should avoid people with a weakened immune system or those who are pregnant.

Three years on from his experience with the condition, Eamonn took to Twitter to urge people – especially those aged 50 and over – to educate themselves and understand shingles.

Eamonn – who has also battled slipped discs in his spine – added: “We all take our health for granted until it’s gone, but when it suddenly does happen to you it’s a whole new ball game, isn’t it? Whether it’s shingles, or your sciatic nerve.”

While most people make a full recovery, shingles can potentially lead to serious and long-lasting problems, including prolonged nerve pain that can last for months or longer.