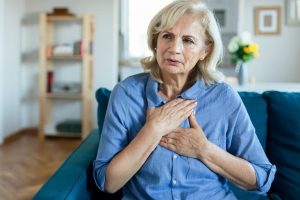 It is widely accepted that eating plenty of fruits and vegetables regularly is good for our health. Not only are they full of vitamins and fibre, but they are low in calories. However, research has found a more conclusive reason to include them in your diet.

A study, published in the European Heart Journal, discovered that a higher intake of fruit and vegetables was linked to a lower rate of strokes.

As part of the research, academics analysed the data on 418,329 men and women from nine European countries.

Country-specific questionnaires were used to establish their average diet over an average period of 12.7 years.

The paper considered the impact of diet on the two main types of strokes.

One is known as an ischaemic stroke, which happens when blood supply is stopped because of a blood clot and accounts for around 85 percent of all cases.

Whereas a haemorrhagic stroke occurs when a weakened vessel supplying blood to the brain bursts.

“The apparent differences in the associations highlight the importance of examining ischaemic and haemorrhagic stroke subtypes separately.”

The study suggests several reasons why there is a link between fruit and vegetables and decreased risk of stroke.

“Given the strong inverse association of fibre with total and ischaemic stroke observed in the current study and in previous studies, as described below, the association between fruit and vegetables and stroke risk might be partly driven by their fibre content,” it says.

“It has also been suggested that fruit and vegetables could be beneficial because they provide various micronutrients including potassium and folate.

“Potassium supplements have been shown to reduce blood pressure in randomised trials, while higher folate intakes may lower plasma homocysteine concentrations, which is also positively associated with stroke risk.

“Fruit and vegetables are also a major source of dietary nitrates, which contributes to endogenous nitric oxide formation, and some evidence suggests that they have blood pressure lowering and vasoprotective properties.”

Signs of a stroke

Arms – The person with suspected stroke may not be able to lift both arms and keep them there because of weakness or numbness in one arm.

Speech – Their speech may be slurred or garbled, or the person may not be able to talk at all despite appearing to be awake; they may also have problems understanding what you’re saying to them.

Time – It’s time to dial 999 immediately if you see any of these signs or symptoms.