Home » Health News » Event planner, 31, ‘broke her back during a yoga class’

Event planner, 31, ‘broke her back during a yoga class’ 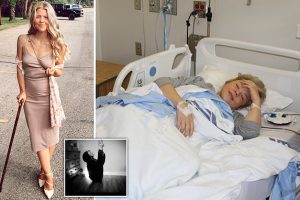 Event planner, 31, who ‘broke her back during a yoga class’ has been left in chronic pain and walking with a cane after her ‘spine started slipping forwards’

A woman was left walking with a cane after she broke her back during a yoga class.

Jennifer Pond heard a ‘pop’ while in a standing twist pose in 2014.

The event planner, now 31, immediately felt pain in her right leg and hip, which she dismissed as a pulled muscle.

When the discomfort became unbearable, Miss Pond had an X-ray, which revealed she had broken the interarticularis bone at the base of her spine.

The injury weakened her backbone, which resulted in it slipping forwards, known as spondylolisthesis.

This caused Miss Pond, of Saskatoon, Canada, constant pain, which left her walking with a limp and unable to manage long distances.

Although early days, she is already walking better and hopes to one day be strong enough to start a family. 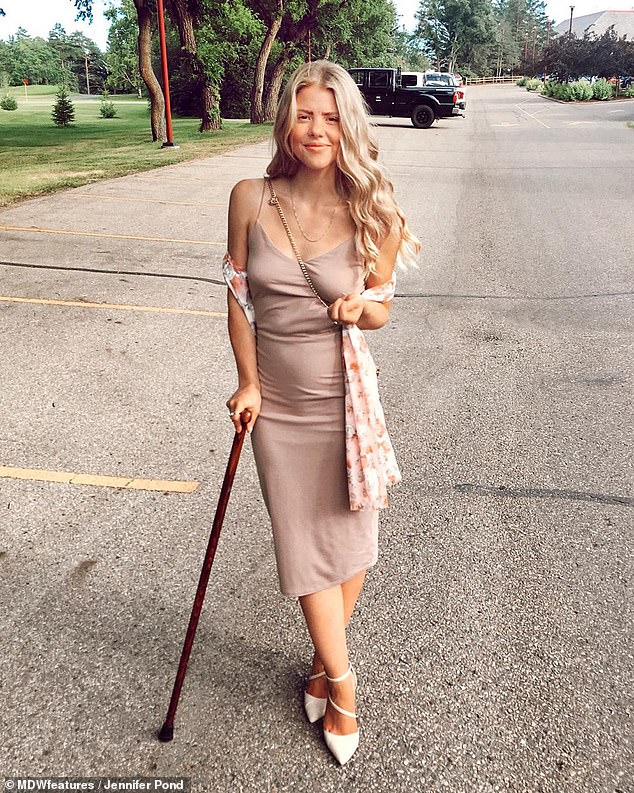 Jennifer Pond was left walking with a cane after she broke her back during a yoga class in 2014. This caused her to endure years of pain, which left her unable to get about. She is pictured at a wedding earlier this month while recovering from spinal-fusion surgery she had on June 10 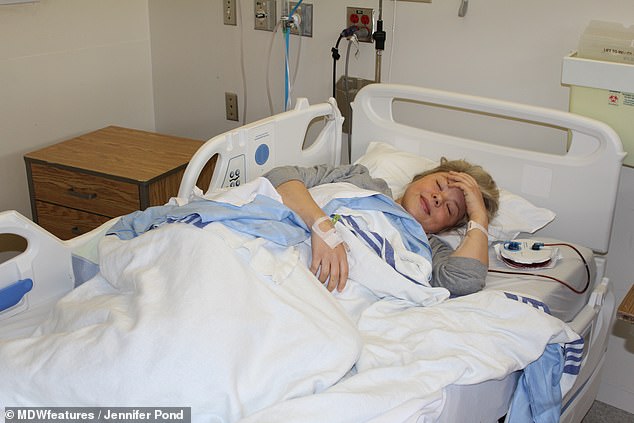 Miss Pond (pictured in hospital) reluctantly went under the knife to have the bones in her vertebrae connected, so they cannot move independently. This should help strengthen her spine after she broke her interarticularis bone at the base of her vertebrae 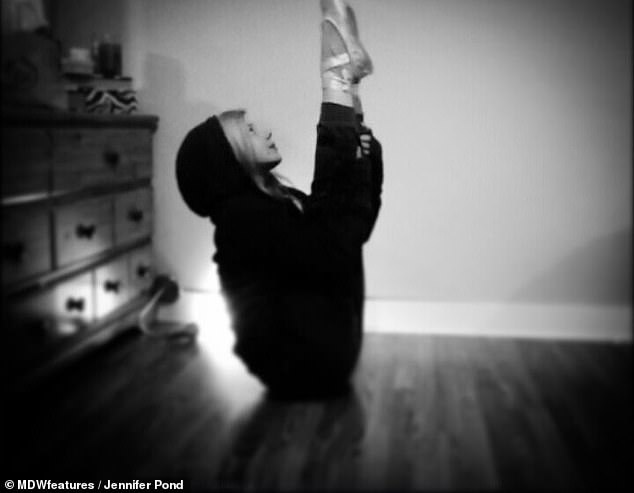 Speaking of the ordeal, Miss Pond said: ‘I fractured my pars interarticularis bone during a yoga class.

‘This bone is connected to your facet joints, which serve as train tracks for your spine, ensuring your vertebras don’t fall off track.

‘I was in a standing twist pose when I heard an internal “pop” in the lower region of my back.

‘It wasn’t until later that I realised this small noise represented a moment that would change my life.’

Miss Pond immediately felt an intense pain in her leg and upper right hip but never imagined the discomfort could be related to her spine.

‘I assumed I had merely pulled a leg muscle, however this theory could no longer be supported when the symptoms began presenting themselves in my left leg,’ she said.

‘By the time I made it to my doctor a few weeks later, the pain had made its way into my lower back.’

Miss Pond had an X-ray, which revealed the true extent of the damage.

‘The initial injury developed into a pretty severe condition called spondylolisthesis, meaning part of my lower spine is slipping forward,’ she said.

‘Specifically, one of my vertebras is slipping over the one below.’

Spondylolisthesis triggered chronic pain, as well as leg weakness, back stiffness and numbness in her limbs.

‘The pain changes and can move around my body but is always present in my lower back,’ Miss Pond said.

‘My symptoms have varied over the years and the intensity can change on any given day. You have no real sense of what you’ll wake up to.

‘Spondylolisthesis is like an ever-changing fingerprint. It’s not only unique to you but the print itself is constantly changing.’ 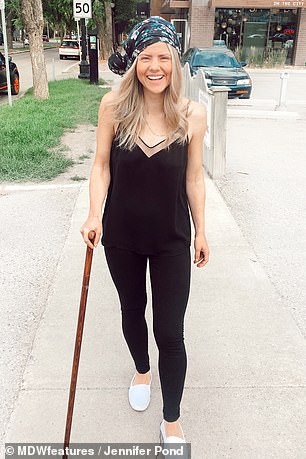 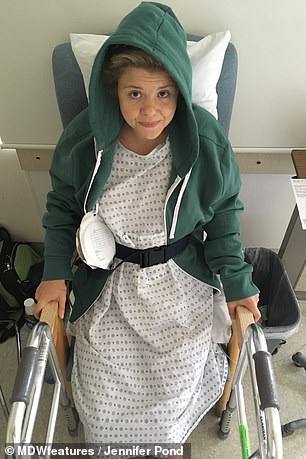 Miss Pond (left) endured four years of agony while she desperately tried to relieve her pain through acupuncture, physiotherapy and massage. With few options left, she eventually agreed to go under the knife despite her fear of surgery. Miss Pond is pictured left recovering 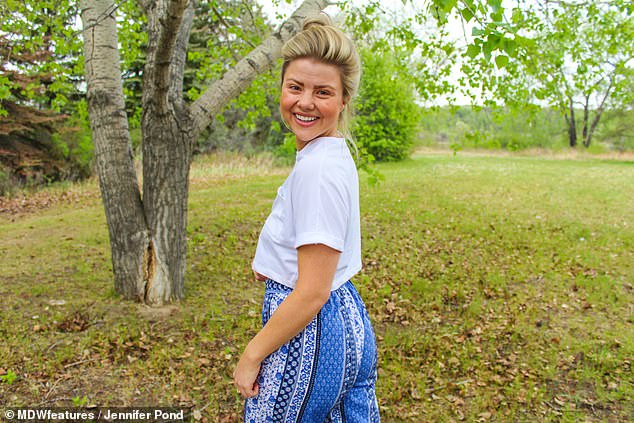 Although early days, Miss Pond (pictured after the spinal fusion) is already able to walk better

Over the next four years, Miss Pond tried many non-surgical interventions, including physiotherapy, acupuncture and massage, which did little to ease her discomfort.

She soon became unable to help out around the house or lift anything remotely heavy.

‘As my condition worsened, so did my quality of life,’ Miss Pond said. ‘I was unable to complete many normal and necessary life tasks.’

Despite her fear of surgery, and spinal fusion have just a 60 per cent chance of improving a patient’s quality of life, Miss Pond eventually agreed to go under the knife.

‘Although spinal-fusion surgery has some scary short and long-term risks, it was my only option left if I want to fight for stability both in my spine and life,’ she said.

‘My surgeon believed he could increase the quality of my life with the surgery, so that I have less pain and more stability.

‘Surgery isn’t a cure, but it can help me regain my life back.’

The procedure involves fusing the slipped bone in the spine to the bones next to it using metal screws and rods, which are left there permanently. 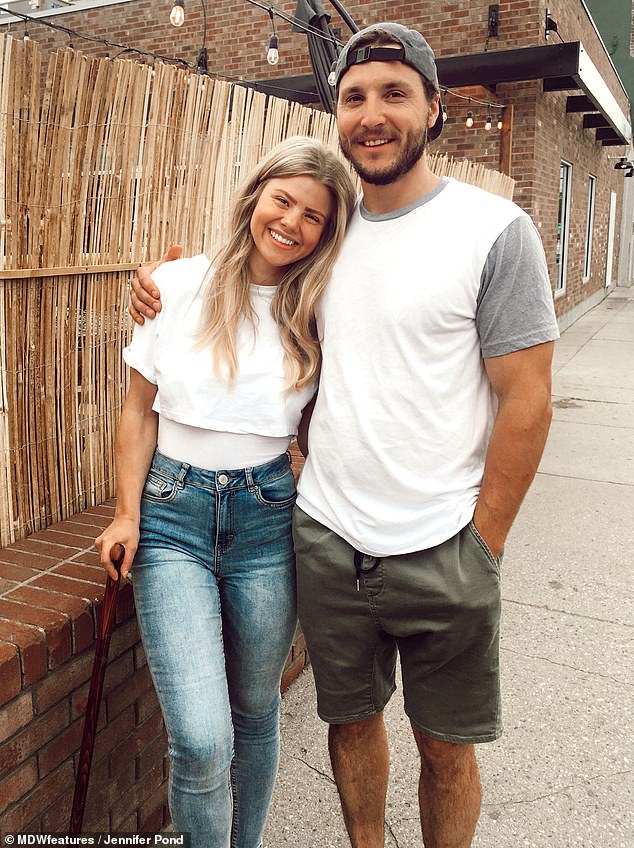 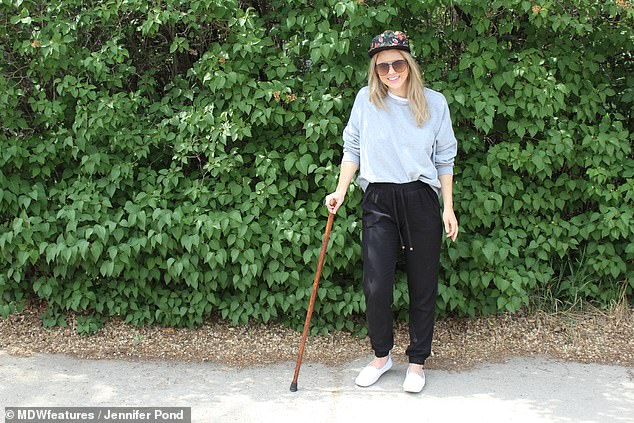 Pictured after surgery, Miss Ponds accept it ‘isn’t a cure’ but will ‘give her her life back’

When Miss Pond woke from the operation, she was immediately in severe pain and went on to suffer complications.

‘Waking up was traumatic,’ she said. ‘The pain was severe and it took hours to get it under control.

‘I was in the recovery room for roughly five hours and unfortunately stopped breathing twice so they had to massage my chest in order to resuscitate me.’

Although recovery has been tough, Miss Pond insists she made the right decision in going under the knife.

‘I have to continually remind myself to sort of ride the recovery wave as each new day brings on different pain, emotions and obstacles,’ she said.

‘The recovery has been slow, but I am walking better. My left leg below my knee is mostly numb, but I’m staying positive.’

Miss Pond is now determined to get back to the life she had before.

‘I want to build my life back up again and add those blocks back to it I have lost over the years,’ she said.

‘I want to spend energy on finding my purpose and pursue that avenue.

‘I look forward to having children one day that I will not only love, but I can physically hold and play with, and to be able to say yes to new opportunities that come my way.’

Miss Pond’s (left) condition became so severe she was ‘unable to complete many normal and necessary life tasks’ like housework. She is pictured right walking around the hospital corridors after coming round from the operation in ‘severe pain’ 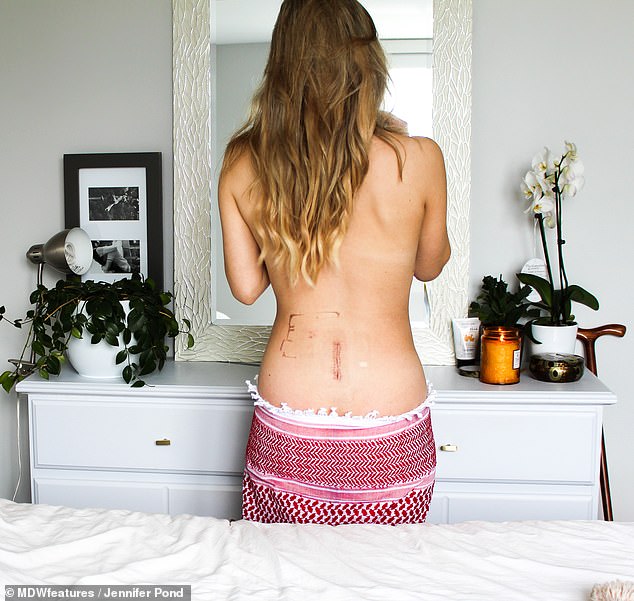 Although recovery has been tough, Miss Pond (pictured showing off her surgery scar) insists she made the right decision in going under the knife. She is determined to ‘build her life back’

Spondylolisthesis occurs when one of the bones in the spine slips out of place.

This usually affects the lower back, but can also occur in the mid-to-upper vertebrae close to the neck.

Spondylolisthesis is not the same as a slipped disc, which is when the tissue between the bones in the spine moves out of place.

Statistics show it affects around 2.7 per cent of men and 8.1 per cent of women to some extent. It is unclear why females suffer more.

Spondylolisthesis does not always cause symptoms. However, it can lead to:

Spondylolisthesis can be caused by a birth defect that makes the spine slip forward.

Trauma, arthritis or a bone abnormality can also trigger the condition.

Most patients are recommended non-surgical treatments like resting, anti-inflammatory painkillers and physiotherapy.

If these do not relieve symptoms, surgery may be necessary.

This involves fusing the slipped bone in the spine to the bones next to it using metal screws and rods, which are left there permanently.

END_OF_DOCUMENT_TOKEN_TO_BE_REPLACED

END_OF_DOCUMENT_TOKEN_TO_BE_REPLACED
We and our partners use cookies on this site to improve our service, perform analytics, personalize advertising, measure advertising performance, and remember website preferences.Ok