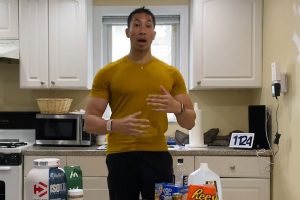 “I’ve been strength training since I was in high school, but for a long time, I wasn’t in control of my diet and didn’t know what I was doing,” he says. “Once I learned that about five or six years ago, then I was able to make really good gains in terms of strength and the size I wanted.”

Samuel keeps to a rigid eating schedule, making sure to fuel every 2 ½ hours from the moment he wakes up. He also tracks how much he eats throughout the day. His preferred daily amounts are around 180 grams of protein, 120 to 180 grams of carbohydrates and 60 to 90 grams of fats.

“As long as I’m awake, I’m gonna eat. I want to be sure that I have some form of nutrition floating through my system so my muscles can constantly get a re-supply of nutrients.” he says.

Samuel’s day usually begins at 7:30 a.m., when he reaches for a shake. He likes to mix 1 ½ scoops of whey protein, 1 tablespoon of almond butter, a greens supplement to get some antioxidants, and water to get his first food source of the day.

There is one catch: “It’s not necessarily the best tasting drink,” Samuel says. “But it also doesn’t taste as bad as you may think.” By 10:00 a.m., Samuel is ready for another shake to carry him through morning meetings.

When noon comes around, Samuel switches to natural sources of protein. A typical lunch for him includes six ounces of salmon, three ounces of brown rice, and two to three ounces of broccoli. That way, he gets a good green vegetable, a slow-burning carb to keep him going through the rest of the day, and a great go-to protein source. He repeats this meal at about 2:30 p.m. “I don’t need a lot of choices in my diet,” he says, “as long as it’s giving me the fuel I need.”

At 5:00 p.m., it’s workout mode. Before training Samuel tries to get in another meal. Because he’s looking to bring a variety of natural protein sources into his food routine, he likes to have five to six ounces of a protein (either chicken, beef or pork), four ounces of potatoes, and a side of peppers and onions.

If he feels like he needs to add some fat into his dinner, then he’ll eat a spoonful of almond butter straight out of the jar. He’ll repeat this again around 7:30 p.m. and by 10:00 p.m., he has his last fueling by eating some salmon and broccoli.

As for hydration, Samuel has a target of finishing a gallon of water a day. Although it might seem daunting (especially at work), he makes it easier by carrying around a large bottle of water everywhere, especially at meetings where he doesn’t always need to speak.

“I don’t have to talk for every minute of every single meeting,” he says. “Meetings are a great chance to sit back when somebody else is talking and guzzle as much water as I possibly can.”

Even though Samuel’s diet looks regimented, he does like to have a cheat day on Saturdays. He does have some caveats though: He respects his water intake, eating intervals ,and protein intake. But don’t think he only likes to eat salmon and broccoli—he does love some peanut butter cups and a slice or two of cheesecake.

So what’s Samuel’s advice for someone looking to create their own eating structure? Find something that will work with you for the long haul and will give you the nutrients necessary for health and for building muscle. “Find a way that works for you. Don’t fall into the trap of going onto a restricted system. Build a system that you can maintain.”

END_OF_DOCUMENT_TOKEN_TO_BE_REPLACED

END_OF_DOCUMENT_TOKEN_TO_BE_REPLACED
We and our partners use cookies on this site to improve our service, perform analytics, personalize advertising, measure advertising performance, and remember website preferences.Ok