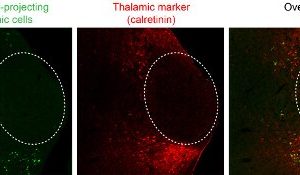 Researchers at the Research Center for Natural Sciences and other institutes in Hungary have recently carried out a study investigating the involvement of brain regions other than the amygdala—more specifically, the lateral thalamus— in controlling fear behavior. Their paper, published in Nature Neuroscience, presents interesting results that could better explain the connections between neutral stimuli and the automatic responses developed by animals in conditioning experiments from a neuroscientific standpoint.

“In our everyday life, we perceive a large amount of information; however, we only store memory of things that have meaning for us, a value that attracts, motivates us or causes us discomfort,” Matyas Ferenc, one of the researchers who carried out the study, told Medical Xpress. “In classical conditioning experiments first conducted by Ivan Petrovics Pavlov (1897), a previously meaningless sound of a bell was presented to a dog along with food; after a few repetitions, the dog started to salivate immediately when it heard the same bell sound, even without food.”

Pavlov’s experiments revealed that if an animal is repeatedly given food immediately after he hears the sound of a bell, it typically learns to associate the sound with the arrival of food and starts salivating when the bell rings, regardless of whether food arrives or not. This phenomenon, dubbed “conditioning,” entails three different processes: learning, memory formation and recall.

Years after the introduction of the classical conditioning paradigm, neuroscientists identified the amygdala as the brain region that plays the most prominent role in an animal’s formation and retrieval of associative memories, as observed in Pavlov’s experiments. Despite the growing evidence highlighting the importance of the amygdala in associative learning and conditioning processes, some researchers have found that other brain regions could also be involved, including the thalamus.

Nonetheless, so far, there has been no definitive scientific evidence of signal association in the thalamus that could reflect conditioning processes. In addition, although some have suggested that the thalamic area, particularly the auditory thalamus, could be connected to the amygdala, researchers have been unable to confirm this connection or identify neuronal pathways that connect these two brain regions.

“All of the unanswered questions and contradictions arising from past neuroscience studies prompted us to re-investigate the signaling pathways involved in a classical fear conditioning paradigm and directly terminated in the amygdala,” Ferenc explained. “In this paradigm, a neutral tone (called conditioned stimulus, CS) is associated with an affective signal (called unconditioned stimulus, US; foot shock) during the conditioning phase. The next day, the same tone alone elicited the similar defensive behavior (freezing) of mice without US delivery.”

In their study, Ferenc and his colleagues performed complex anatomical and functional investigations aimed at mapping all the brain regions that could quickly transmit signals to the amygdala. They genetically identified a lateral thalamic cell population located outside of the auditory thalamus brain region that fulfills all the requirements for completing this particular action.

“The cell population we identified (1) receives brainstem (direct) multisensory inputs shown by monosynaptic Rabies tracing; (2) it shows the largest activation when two signals (tone and foot-shock) were paired while we recorded from identified amygdala-projecting lateral thalamic neurons; and (3) it controls the stimulus-evoked activations of the connected amygdala neurons tested by optogenetic inhibition of thalamic inputs while we monitored the firing pattern of the amygdala cells,” Ferenc said.

Ferenc and his colleagues identified a new inhibitory neuronal subgroup, part of the GABAergic cell population, that had been overlooked in previous studies. This unique cell population appears to contribute greatly to the transfer of signals from the thalamus to the entire amygdala brain region. The researchers used optogenetic inhibition techniques during fear conditioning experiments on mice to investigate the potential role of this thalamic cell type in controlling conditioned fear behavior.

“Animals for which the thalamic inputs within the amygdala were silenced during the presentation of the tone and foot-shock stimuli did not show freezing behaviour, while control mice (without optogenetic silencing) did,” Ferenc said. “Our investigations thus highlighted that—in contrast to the well-accepted concept of signal association in the amygdala—the lateral thalamus can integrate these signals and send associative information in the amygdala, shaping defense behavior.”

In addition to unveiling the presence of associative signaling in the thalamus, Ferenc and his colleagues found that the pairing of a tone and foot-shock in mice during their conditioning experiment changed the firing pattern of the animals’ lateral thalamic cells. This suggests that these thalamic cells’ activity is plastic, or in other words that it can be shaped over time by relevant environmental signals. Interestingly, the researchers also found that the optogenetic inhibition of thalamic inputs prevented the animals from recalling fear memories.

In 1994, a renowned neuroscientist called Joseph LeDoux introduced the idea that the thalamus provides two sensory routes to the amygdala. The first is a quick and unprocessed pathway that directly leads to rapid behavioral responses, while the second is an ‘indirect’ and slower pathway that passes through cortical regions associated with a specific behavior. Remarkably, Ferenc and his colleagues identified the thalamic region that could be involved in these two processes, as well as a single cell population that drives both of these pathways to the amygdala.

“Our results prove that the amygdala is not the only place in the brain with the capability of pairing CS and US signals: CS-US association is occurred at the level of the (calretinin-expressing) lateral thalamic cells which then, convey this information to the amygdala and cortex,” Ferenc said. “The signal association drives thalamic plasticity which is accompanied with memory storage about the conditioning event.”

Past research, including a study conducted by Kay Tye in 2008, introduced the idea that the same thalamic pathway identified by Ferenc and his colleagues could be involved in reward learning. The findings gathered by the researchers provide new evidence suggesting that the specific cell population they studied does not merely relay sensory information to the amygdala, but that it can also generally encode environmental information related to behavioral responses.

By unveiling another distinct cell population that may play a role in associative learning, the recent study conducted by Ferenc and his colleagues could open up new possibilities for the diagnosis and treatment of numerous mental disorders, particularly those characterized by unhelpful associative learning. In the future, their work could inspire further studies investigating the potential presence of thalamic dysfunctions in people with mental health disorders linked with maladaptive associative learning.