False positive monkeypox tests in low-risk patients with no exposures 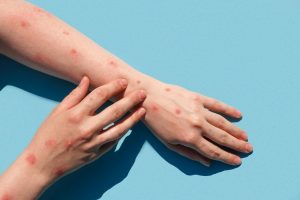 A worldwide outbreak of monkeypox that has affected over 90 nations since May 2022 has been traced to about 20,000 cases in the United States (US), mostly affecting gay, bisexual, and other males who have sex with men (MSM). A few cases of the monkeypox virus (MPXV), which transmit from person to person through close, continuous contact, have been reported in populations who are not MSM. Testing is advised for those who fit the criteria for a suspected case.

To detect orthopoxviruses from lesion specimens, the Centers for Disease Control and Prevention (CDC) has developed five real-time polymerase chain reaction (PCR) techniques. Due to the high sensitivity of these tests, false-positive results may occasionally result from the processing and/or testing of positive MPXV specimens alongside negative ones.

In this study, three individuals with atypical rashes were diagnosed with monkeypox based on false-positive test findings for late cycle threshold (Ct) values of 34 or more who had no epidemiologic association to a monkeypox case or known risk factors.

Description of Patient A

Patient A, a healthy pregnant lady, had a pruritic, erythematous rash on the patient's arms, belly, upper back, calves, and shins when she was assessed for labor. Her lesions were not typical for monkeypox and were reported to have appeared five weeks earlier. The team noted developmental stages from normal monkeypox lesions such as crusted papules, tan papules, pustules, and hyperpigmented macules, and had irregular borders. There were no genital lesions found. She did not exhibit any of the classic monkeypox prodromal symptoms.

A family member was reported to have a rash identical to patient A's, which appeared four days earlier in that person. No testing was conducted on that individual, and there was no evidence of an epidemiological connection to a monkeypox case. During the three weeks before the commencement of the rash, Patient A did not travel interstate or internationally.

She reported having varicella and receiving a smallpox immunization as a child. Testing was performed for syphilis, herpes simplex, cryptococcosis, and histoplasmosis, all of which yielded negative results. Furthermore, 53 days following the commencement of the rash, a pustular forearm lesion was swabbed, and the result of the nonvariola-orthopoxvirus (NVO) test was positive.

Patient A gave birth to a healthy newborn via vaginal delivery two days after the NVO test result. The infant was administered vaccinia immune globulin intravenous (VIGIV) as part of a single patient emergency Investigational New Drug application due to concerns about congenital or perinatal transmission.

Description of Patient B

Patient B was a previously healthy child who studied in elementary school. The child initially showed signs of influenza, and two days later, his face developed raised lesions. The trunk, arm, and back had lesions by the next day. Over the course of two days, the papulopustular lesions developed ulcerated and crusty. There was no evidence of an epidemiological connection to a case of monkeypox. An orthopoxvirus generic laboratory developed tests (LDT) showed positive results from a swab of a face lesion.

Patient B was treated with tecovirimat because of periorbital lesions, probable ocular autoinoculation, and the potential onset of a disease that could cause blindness. The child had practiced a contact sport when the rash first appeared and shared a home with four other people. He was released from isolation when a second test on the original samples led to a negative result. The results of the enterovirus PCR test pointed to a diagnosis of hand, foot, and mouth disease.

Patient C was an infant who spent about a month in the US with both parents before going on a vacation with four other families to another nation. The patient suffered diarrhea and lymphadenopathy during that journey. Additionally, two days after returning to the US, the child displayed a fever and a rash. The maculopapular and vesicular rash initially appeared on the arms and legs and spread to the chest, earlobe, lower abdomen, and scalp. Subsequently, the rash scabbed over two weeks later. After NVO and an orthopoxvirus generic LDTs, one abdominal lesion tested positive, while two additional lesions tested negative.

Seven children and 12 adults received postexposure prophylaxis (PEP) alongside the JYNNEOS vaccine. Anti-orthopoxvirus antibodies were not found in the serum obtained from two of the adults and four of the children between three and 31 days after the rash was first observed.

To summarize, the present study evaluated three patients with atypical rashes for monkeypox. It highlighted the need for caution when interpreting results from a single laboratory test in patients with a low pretest probability of infection. These patients included those with no epidemiologic link, belonged to non-MSM populations such as women and children, and had symptoms or rash progression inconsistent with monkeypox diagnosis.