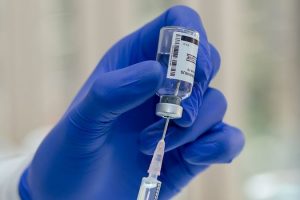 The next generation of COVID-19 vaccines should be able to fight off a new strain and be given each year, a panel of experts that advises the FDA said Wednesday.

But members of the panel also acknowledged that it will be an uphill battle to reach that goal, especially given how quickly the virus continues to change.

The members of the Vaccines and Related Biological Products Advisory Committee said they want to find the balance that makes sure Americans are protected against severe illness and death but doesn’t wear them out with constant recommendations for boosters.

“We don’t feel comfortable with multiple boosters every 8 weeks,” said committee chairman Arnold Monto, MD, professor emeritus of public health at the University of Michigan. “We’d love to see an annual vaccination similar to influenza but realize that the evolution of the virus will dictate how we respond in terms of additional vaccine doses,” he said.

The virus itself will dictate vaccination plans, he said.

The government must also keep its focus on convincing Americans who haven’t been vaccinated, to join the club, committee member Henry H. Bernstein, DO, said, “given that “it seems quite obvious that those who are vaccinated do better than those who aren’t vaccinated.”

The government should clearly communicate to the public the goals of vaccination, he said.

“I would suggest that our overall aim is to prevent severe disease, hospitalization, and death more than just infection prevention,” said Bernstein, professor of pediatrics at Zucker School of Medicine at Hofstra/Northwell Health in New Hyde Park,NY.

The FDA called the meeting of its advisers to discuss overall booster and vaccine strategy, even though it already authorized a fourth dose of the Pfizer and Moderna vaccines for certain immune compromised adults and for everyone over age 50.

Early in the all-day meeting, temporary committee member James Hildreth, MD, the president of Meharry Medical College in Nashville, asked why that authorization was given without the panel’s input.  Peter Marks, MD, the director of FDA’s Center for Biologics Evaluation and Research, said the decision was based on data from the United Kingdom and Israel that suggested immunity from a third shot was already waning.

Marks later said the fourth dose was “authorized as a stopgap measure until we could get something else in place,” because the aim was to protect older Americans who had died at a higher rate than younger individuals.

“I think we’re very much on board that we simply can’t be boosting people as frequently as we are,” said Marks.

The meeting was meant to be a larger conversation about how to keep pace with the evolving virus and to set up a vaccine selection and development process to better and more quickly respond to changes, such as new variants.

But committee members said they felt stymied by a lack of information. They wanted more data from vaccine manufacturers’ clinical trials. And they noted that so far, there’s no objective, reliable lab-based measurement of COVID-19 vaccine effectiveness — known as a correlate of immunity. Instead, public health officials have looked at rates of hospitalizations and deaths to measure whether the vaccine is still offering protection.

“The question is, what is insufficient protection?” Meissner said. “At what point will we say the vaccine isn’t working well enough?”

CDC officials presented data showing that a third shot has been more effective than a two-shot regimen in preventing serious disease and death, and that the three shots were significantly more protective than being unvaccinated.

In February, as the Omicron variant continued to rage, unvaccinated Americans age 5 and older had an almost three-times-higher risk of testing positive, and nine times higher risk of dying compared to those who were considered fully vaccinated, said Heather Scobie, PhD, MPH, a member of CDC’s COVID-19 Emergency Response team.

But only 98 million Americans — about half of those aged 12 or older — have received a third dose, Scobie said.

It’s also still not clear how much more protection a fourth shot adds, or how long it will last. The committee heard data on a just-published study of a fourth dose of the Pfizer vaccine given to some 600,000 Israelis during the Omicron wave from January to March. The rate of severe COVID-19 was 3.5 times lower in the group that received a fourth dose compared to those who had gotten only three shots, and protection lasted for at least 12 weeks.

Still, study authors said, any protection against infection itself was “short-lived.”

The advisers discussed the possibility of making COVID-19 vaccine development similar to the process for the flu vaccine but acknowledged many difficulties.

The flu predictably hits during the winter in each hemisphere  and a global surveillance network helps the World Health Organization (WHO) decide on the vaccine strains each year. Then each nation’s regulatory and public health officials choose the strains for their shot and vaccine makers begin what is typically a 6-month-long manufacturing process.

COVID outbreaks have happened during all seasons and new variants haven’t always hit every country in a similar fashion. The COVID virus has mutated at five times the speed of the flu virus — producing a new dominant strain in a year, compared to the 3-to-5-years it takes for the flu virus to do so, said Trevor Bedford, PhD, a professor in the vaccine and infectious disease division at the Fred Hutchinson Cancer Research Center in Seattle.

Global COVID surveillance is patchy and the WHO has not yet created a program to help select strains for a COVID-19 vaccine but is working on a process. Currently, vaccine makers seem to be driving vaccine strain selection, said panelist Paul Offit, MD, professor of pediatrics at Children’s Hospital of Philadelphia. “I feel like to some extent the companies dictate the conversation,” he said. “It shouldn’t come from them. It should come from us,” said Offit.

“The important thing is that the public understands how complex this is,” said temporary committee member Oveta A. Fuller, PhD, associate professor of microbiology and immunology at the University of Michigan.  “We didn’t get to understand influenza in 2 years,” she said. “It’s taken years to get an imperfect but useful process to deal with flu.”

Alicia Ault is a Lutherville, Maryland-based freelance journalist whose work has appeared in publications including JAMA, Smithsonian.com, The New York Times, and The Washington Post. You can find her on Twitter @aliciaault.