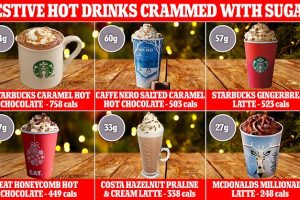 Revealed: The high street’s Christmas coffees crammed with NINE TIMES more sugar than a Krispy Kreme doughnut and as many calories as a Domino’s pizza

Popular festive coffees sold on British high street are packed with up to nine times more sugar than a Krispy Kreme doughnut.

Investigators analysed the sugar and calorie content of 203 hot drinks on Christmas menus of chains including Starbucks, Costa and Pret.

Starbucks’ Signature Caramel Hot Chocolate was the worst offender, with one large mug serving up 758 calories – more than a 10-inch Delight Chicken pizza from Domino’s.

It was also crammed with 93.7g of sugar, three times an adult’s entire daily allowance and nine times more than a glazed doughnut from Krispy Kreme.

Campaign group Action on Sugar, based at Queen Mary University of London, has called on the Government to extend its soft drink levy to caffeinated hot ones. 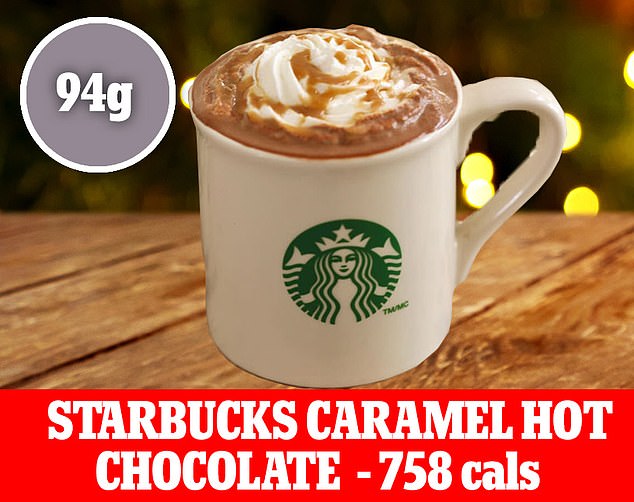 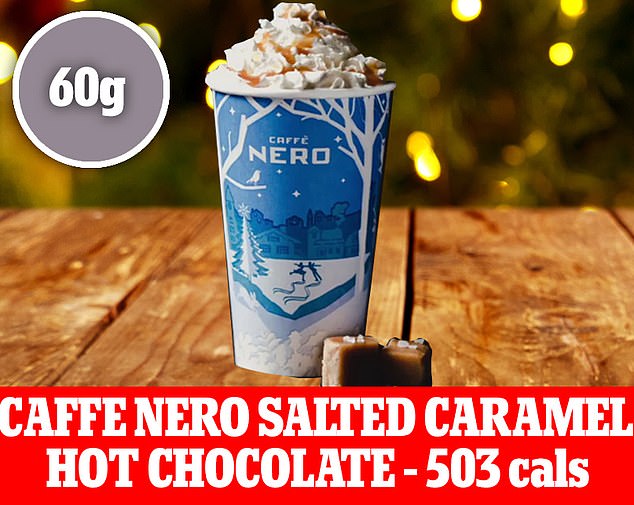 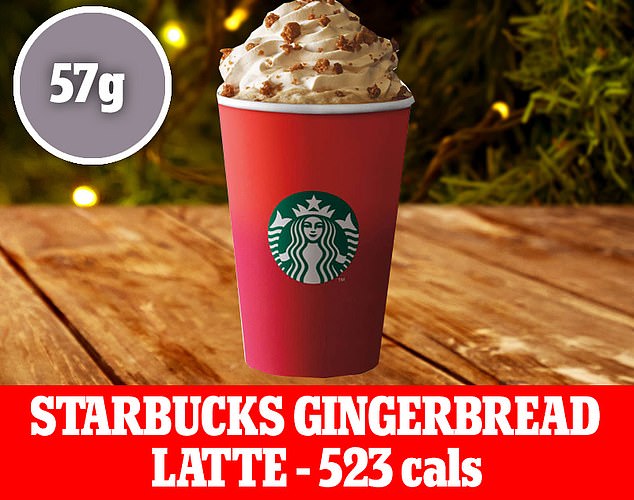 Starbucks’ Gingerbread Latte was not much better, serving up 523 calories and 57g of sugar in a large cup

An average person would have to do an hour-and-a-half of running on a cross trainer to work this energy off.

Starbucks’ Gingerbread Latte was not much better, serving up 523 calories and 56.6g of sugar in a large cup.

All but two of the largest available size products would receive a red traffic light for total sugars, more than 13.5g.

The exceptions were Costa’s Gingerbread Lattes and Pret’s Soya Pumpkin Spice Latte, which would receive amber. 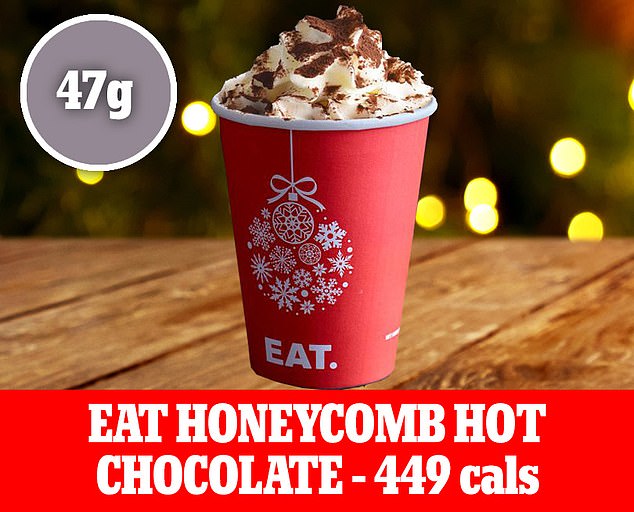 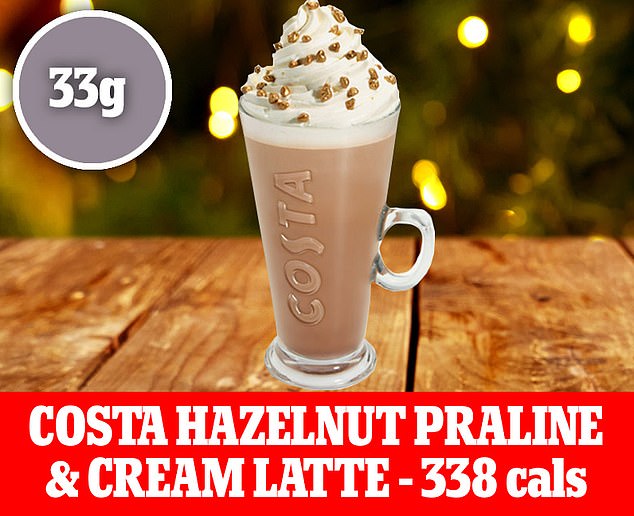 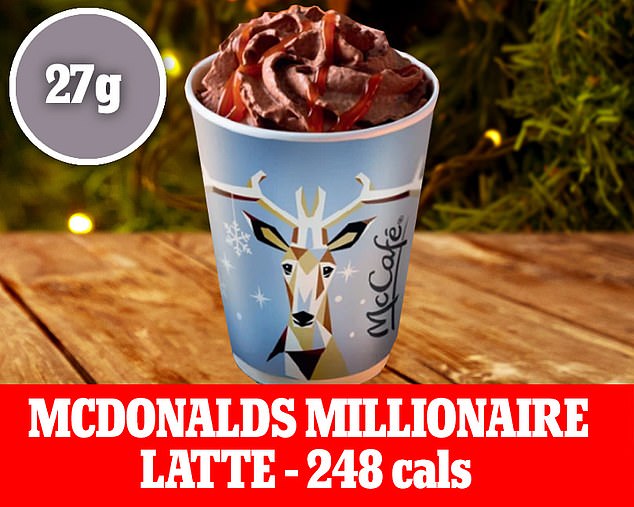 HOW MUCH SUGAR IS TOO MUCH?

The amount of sugar a person should eat in a day depends on how old they are.

Children aged four to six years old should be limited to a maximum of 19g per day.

Seven to 10-year-olds should have no more than 24g, and children aged 11 and over should have 30g or less.

Meanwhile the NHS recommends adults have no more than 30g of free sugars a day.

Popular snacks contain a surprising amount of sugar and even a single can of Coca Cola (35g of sugar) or one Mars bar (33g) contains more than the maximum amount of sugar a child should have over a whole day.

A bowl of Frosties contains 24g of sugar, meaning a 10-year-old who has Frosties for breakfast has probably reached their limit for the day before they even leave the house.

Children who eat too much sugar risk damaging their teeth, putting on fat and becoming overweight, and getting type 2 diabetes which increases the risk of heart disease and cancer.

Despite Government clampdowns on sugary drinks in the past few years, more than a quarter (27 per cent) of the drinks seen their sugar content increase since 2016.

Three years ago, a standard hot chocolate from Greggs contained 33g of sugar – but it is now crammed with 42g.

Caffe Nero’s White Chocolate Mocha is filled with 30.1g of sugar despite containing 24.5g in 2016.

And a Vanilla Latte from KFC has 26g of sugar now, compared with 19g three years ago – nearly two teaspoons more.

Graham MacGregor, professor of cardiovascular medicine at Queen Mary University of London, said: ‘It’s vital that whichever government is in power next week fully commits to the target to halve childhood obesity by 2030.

‘This will mean giving full control to PHE to deliver a robust prevention programme and the authority to ensure that a largely irresponsible food industry fully complies – and that must include taxing these sugary milk-based drinks in the same way as soft drinks.’

Registered nutritionist Holly Gabriel, from Action on Sugar, added: ‘It is shocking that so many high street coffee chains are wilfully putting their customers’ health at risk despite PHE setting sugar reduction targets for sugary milk drinks in 2018.

‘Coffee shops and cafes need to take much greater steps to reduce the levels of sugar and portion sizes, promote lower sugar alternatives and stop pushing indulgent extras at the till.’

He said: ‘Every day, at least 100 children are in UK hospitals having rotten teeth pulled out because of decay caused by sugary food and drinks that is entirely preventable.

‘It is high time coffee shops and cafes act more responsibly and that means reducing the sugar and portion sizes across their drinks menu and stop putting profits before the health of our nation which is feeding the UK’s obesity, type 2 diabetes and tooth decay crisis.’

END_OF_DOCUMENT_TOKEN_TO_BE_REPLACED

END_OF_DOCUMENT_TOKEN_TO_BE_REPLACED
We and our partners use cookies on this site to improve our service, perform analytics, personalize advertising, measure advertising performance, and remember website preferences.Ok