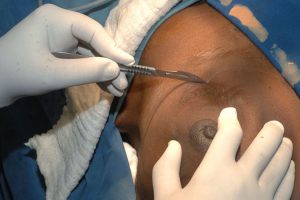 Six years ago, Kim Bowles had a double mastectomy after being diagnosed with stage 3 breast cancer. Instead of opting for reconstruction, she decided to go “flat.” At 35, she had already breast-fed both of her children, and didn’t want breasts anymore.

She asked her surgeon for an aesthetic flat closure, showing him photos of a smooth chest with no excess skin flaps. Although he agreed to her request in the office, he reneged in the operating room.

As the anesthesia took effect he said, “I’ll just leave a little extra skin, in case you change your mind.”

The last thing she remembers is telling him “no.”

When Bowles woke up, she saw excess tissue instead of the smooth chest she had requested. When she was eventually well enough, she staged a topless sit-in at the hospital and marched outside with a placard, baring her breastless, disfigured chest.

“Do I need a B-cup side-boob?” she asks pulling at her lateral excess tissue, often referred to as dog ears. “You would never think that a surgeon would leave somebody looking like that,” she told Medscape Medical News.

Based on her experience, Bowles coined the term “flat denial” to describe what her surgeon did.

The Weight of Flat Denial

In a recent study, Deanna Attai, MD, a breast surgeon at University of California Los Angeles, discovered that more than 1 in 5 women who want a flat closure experience flat denial.

But well before that survey, Attai first came across flat denial more than a decade ago when a patient came to her for a second opinion after another surgeon insisted the patient see a psychiatrist when she requested a flat closure. Attai performed the flat closure for her instead.

But Attai said flat denial can take many forms. Some experiences may closely match the paternalistic encounter Bowles had, where a surgeon disregards a patient’s request. Other surgeons may simply be ignorant that a flat closure can be achieved aesthetically or that patients would even want this option.

This resistance aligns with Hester Schnipper’s experience as an oncology social worker. In her 45-year career, she has often found herself pushing back against breast surgeons who present reconstruction as if it were the only option for patients after mastectomy.

“And because most women are so overwhelmed, so scared, so stressed, they tend to go with whatever the doctor suggests,” said Schnipper.

Whatever form flat denial takes, the outcome can be damaging to the patient.

“This isn’t just ‘my scar’s a little thick.’ This is much more,” Attai said. “How do you even put a prosthesis on that? And if you’re not going to do a prosthesis in a bra, how do you even wear a shirt with all of that? It becomes a cleaning issue and depending on how things scar down you can get irregular fibrosis.”

What’s more, the harms of flat denial can extend beyond the physical scars.

Like Bowles, Anne Marie Champagne had made her desire for a flat closure clear to her surgeon before undergoing a mastectomy in 2009. The surgeon also reneged in the operating room while Champagne was unconscious and unable to object.

Champagne told The Washington Post that her surgeon’s justification for his actions left her feeling “profound grief, a combination of heartache and anger.”

“I couldn’t believe that my surgeon would make a decision for me while I was under anesthesia that went against everything we had discussed — what I had consented to.”

Although it’s not clear how often women experience flat denial, discussions surrounding the issue have increased in recent years.

Bowles started a patient advocacy organization called “Not Putting on A Shirt” to help other women. And Attai moderates a Twitter group, called #BCSM or Breast Cancer Social Media, where patients share their experiences of breast cancer treatment, including in some cases flat denial.

“In getting to know so many women in the online space, an early observation was that the conversations online were different than what we had in the office,” Attai said. Online “women were less guarded and more open about sharing the entirety of their breast cancer experience, including the more painful and raw moments.”

Being immersed in these moments, it also became clear to Attai that members of the treatment team don’t always recognize what is most important to a patient. “We might not ask, we might not allow them the time to express their preferences, or we might not really hear them,” she said.

National figures on the prevalence of flat closures remain elusive, but it has always been an option. And data indicate that many women choose no reconstruction after mastectomy.

One US survey of women undergoing mastectomy between 2005 and 2007 found that 58% opted not to receive reconstruction, and a more recent British National Mastectomy and Breast Reconstruction Audit from 2011 found 70% chose no reconstruction.

But to better understand the scope of flat denial, Attai and colleagues conducted a survey, published last year in the Annals of Surgical Oncology. In it, she found that, among 931 women who had opted to go flat after mastectomy, 22% had experienced flat denial. That meant not being offered the option of going flat, not being supported in their choice to go flat, or not receiving the flat closure surgery initially agreed upon.

Last spring, Attai, past-president of the American Society of Breast Surgeons’ (ASBrS), took her results to the society’s annual meeting. The goal was to bring to light aesthetic flat closure techniques as well as the harms of flat denial, presenting photos of the sagging, shriveled skin flaps alongside her analysis.

“No one ever goes into an operation intending it to look like those horrible pictures,” she said.

Asking for “no breast mound reconstruction” should imply a nice neat flat closure, or an aesthetic flat closure, Attai explains. “A patient should not have to specify she wants the surgeon to make all efforts to remove redundant and excess skin and fat, but I do think having the discussion and making preferences very clear is important, especially as we’ve seen that some patients are not getting the desired outcome.”

To help improve education and communication, the board of “No Putting on a Shirt” also had an exhibitor’s booth focused on aesthetic flat closures at the ASBrS meeting.

And given this growing awareness, the National Accreditation Program for Breast Centers (NAPBC) has begun asking breast centers to report their process for shared decision-making on post-mastectomy choices and provide proof that patients’ closure choices are being heard and followed.

A Shift Toward Aesthetics

Despite a growing interest in flat closure aesthetics, the landscape shift is still relatively new.

The traditional mastectomy training Attai and her colleagues went through in the 1990s did not emphasize aesthetics.

“I just removed the breast and then I left the room,” she said, explaining that the plastic surgeon took charge of the reconstruction. “We never really learned how to make a nice, neat closure.”

“A decade ago, I would argue that…it wasn’t in the training program,” but today breast surgery fellowships now include “flat closures that are aesthetically appropriate,” said Chatterjee, who works at Tufts Medical Center in Boston and is vice-chair of the ASBrS oncoplastics committee.

“In my mind, and in any surgeon’s mind, when you do something, you have to do it well…and with that, aesthetics should be presumed,” he added.

But the term “aesthetic flat closure” was only adopted by the National Cancer Institute in 2020. The NCI, which considers an aesthetic flat closure reconstructive not cosmetic surgery, defines it as rebuilding the shape of the chest wall after breasts are removed, and involves contouring and eliminating excess tissue to create a smooth, flat chest wall.

Achieving this smooth look requires a skilled surgeon trained in flat closure reconstruction, which is not necessarily a guarantee. To help women find a surgeon, “Not Putting on A Shirt” has a flat friendly directory where patients can recommend surgeons who provide aesthetic flat closures. As of August 2022, the list has now grown to over 300 surgeons.

Chatterjee said the ASBrS is actively involved in training surgeons in aesthetic flat closure. Given this shift, he said most general or breast surgeons should have the skill set to design mastectomy flaps that enable a flat closure with no excess skin, but there are some caveats.

For instance, he notes, if a woman has a lot of breast tissue and excess skin in the outer, lateral folds of the axilla, “it is very, very hard to get a flat closure” and in those rare circumstances, a breast surgeon may need assistance from a plastic surgeon.

But Attai finds a significant gap still exists between what should be done and what is being done in practice.

Part of that disconnect may stem from the lack of a standard of care.

In a recent publication, a team of plastic surgeons from New York University note that to date, “there is no plastic surgery literature on specific techniques to achieve an aesthetic flat closure after mastectomy.”

And Attai added, “there is really no way to know at this point what women are getting when they choose no breast mound reconstruction.”

Physicians may also simply not understand what their patients want.

Attai said she was “blown away” by the reaction to her presentation on flat denial at ASBrS last April. “I had a lot of members come up to me afterwards and say ‘I had no idea that patients would want this. I am guilty of not offering this.’ “

In addition, Chatterjee said, patients may now have “much higher” expectations for a smooth, symmetrical look “versus an outcome with excess skin and bumps.”

But Bowles said the desire for a more aesthetically pleasing look is nothing new.

“Women have always cared about how they look, they are just shamed into accepting a lesser result,” she argues. “If you look at why women go flat, the primary reason is they don’t want more surgery, not ‘I don’t care what I look like.’ “

Three years after the mastectomy that left flaps of skin hanging from her chest, Bowles finally had a revision surgery to achieve the flat closure aesthetic she had wanted from the get-go.

“Nobody expects perfection, but I think the important thing is to have a standard of care that’s optimal,” said Bowles. “A patient like me should not have needed another surgery.”

Kate Johnson is a Montreal-based freelance medical journalist who has been writing for more than 30 years about all areas of medicine.