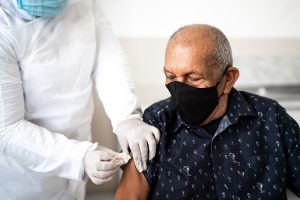 A fourth dose of the Pfizer-BioNTech vaccine is effective in reducing the short-term risk for COVID-19 infection, hospitalization, and death in people who got a third dose at least 4 months before, a large study published Wednesday shows.

However, Paul Offit, MD, author of an editorial accompanying the study, told Medscape Medical News, “I would argue, without fear of contradiction, that this is going to have no impact on this pandemic.”

“We are still in the midst of a zero-tolerance policy for this virus. We don’t accept mild illness and if we’re not going to accept mild illness, we think we have to boost it away, which would mean probably about two doses every year. That’s not a reasonable public health strategy,” Offit, director of the Vaccine Education Center at Children’s Hospital of Philadelphia (CHOP) in Pennsylvania, said.

Results of the research out of Israel published Wednesday in the New England Journal of Medicine make a case for a fourth booster for people 60 and over.

The researchers compared outcomes in people 60 or older (average age 72) who got a fourth dose with outcomes in those who had only a third dose. They individually matched people from the two groups, considering factors such as age, health status, and ethnicity.

Several countries, including the United States, have begun offering a fourth vaccine dose for higher-risk populations in light of evidence of waning immunity after the third dose and waves of infection, driven by Omicron and its variants, in some parts of the world. But the recommended age groups differ considerably.

In the United States, for instance, the US Food and Drug Administration in late March approved a fourth dose of the Pfizer or Moderna vaccine for anyone over 50 and people over 18 who have gotten a solid organ transplant or have a similar level of immune risk.

Offit points out that Israel offers the fourth vaccine for people 60 and over and the European Medical Association offers it for those over 80. No surprise that confusion over the fourth dose is rampant, he said.

People who are immunocompromised could reasonably get a fourth dose, he said, depending on the manner in which they are compromised.

“Someone who has a solid organ transplant is not the same as someone who is getting a monoclonal antibody for their rheumatoid arthritis,” Offit said.

He said that people could also make a reasonable argument for the fourth dose if they are over 65 and have multiple comorbidities.

People with multiple comorbidities over age 12 could reasonably get a third dose, he said.

“For everybody else — healthy people less than 65 — I would argue this is a two-dose vaccine,” Offit said.

CHOP, he noted as an example, mandates the vaccine but doesn’t mandate three doses and he says that’s not unusual for hospital systems.

“How many lives are you really saving with that fourth dose? If you really want to have an effect on this pandemic, vaccinate the unvaccinated,” Offit said.

Focus on the Memory Cells

Offit writes in the editorial, “Arguably, the most disappointing error surrounding the use of Covid-19 vaccines was the labeling of mild illnesses or asymptomatic infections after vaccination as ‘breakthroughs.’ As is true for all mucosal vaccines, the goal is to protect against serious illness — to keep people out of the hospital, intensive care unit, and morgue. The term ‘breakthrough,’ which implies failure, created unrealistic expectations and led to the adoption of a zero-tolerance strategy for this virus.”

Offit said that the focus should be on the memory cells, not the neutralizing antibodies.

Regarding mRNA vaccines, Offit said “The surprise of this vaccine — it surprised me and other vaccine researchers — is that with these two doses of mRNA separated by 3 to 4 weeks, you actually appear to have long-lived memory response.

“That’s not the history of vaccines. If you look at the inactivated polio vaccine or the inactivated hepatitis A vaccine, you really do need a 4- to 6-month interval between doses to get high frequencies of memory cells. That doesn’t appear to be the case here. It looks like two doses given close together do just that. Memory cells last for years if not, sometimes, decades.”

Neutralizing antibodies, on the other hand, protect against mild illness and their effectiveness wanes after months.

“At some point we are going to have to get used to mild illness,” Offit said.

The Centers for Disease Control and Prevention must now determine who will benefit most from booster dosing and educate the public about the limits of mucosal
vaccines, Offit writes in the editorial.

“Otherwise, a zero-tolerance strategy for mild or asymptomatic infection, which can be implemented only with frequent booster doses, will continue to mislead the public about what Covid-19 vaccines can and cannot do.”

The work was funded by the Ivan and Francesca Berkowitz Family Living Laboratory Collaboration at Harvard Medical School and Clalit Research Institute.

Marcia Frellick is a freelance journalist based in Chicago. She has previously written for the Chicago Tribune, Science News, and Nurse.com, and was an editor at the Chicago Sun-Times, the Cincinnati Enquirer, and the St. Cloud (Minnesota) Times. Follow her on Twitter at @mfrellick.