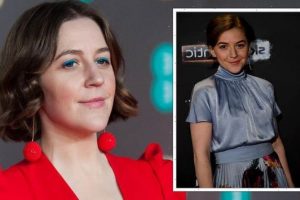 The actress has appeared in numerous shows, including Killing Eve and Upstart Crow. The star is also noticeably funny, winning her a Funny Women Variety Award in 2010 after conjuring up the character Chastity Butterworth – a rude Edwardian lady with a drink and drug problem. Far away from her comical nature, Gemma suffered a sobering experience as a teenager when she was hospitalised from an eating disorder. The experience understandably took such a toll on her actress that she has only been able to speak about it in the past year.

Reflecting on this time in her life and whether she is glad to be speaking about it, in an interview with The Times Gemma said: “It’s part of my life. If it can help one or two people maybe feel it’s not hopeless and you can get better, then yeah, I’ll share it.

“I am not so private I wouldn’t talk about that. Because it really shaped me. It formed so much of my life and the way I live my life and my personality and my approach to things.

“Sometimes when you’re a bit younger you think, ‘Ooh, people might have opinions about me,’ or, ‘They might not want to employ me,’ or, ‘Mental health is such a scary thing for some people.’

“But I suppose as well you hear so much of this in our industry, of so many, particularly female, actors having gone through similar experiences and therefore it’s not so scary to talk about it.”

The NHS explains that an eating disorder is a mental health condition where individuals use the control of food to cope with feelings and other situations.

This can include eating too much or too little and worrying about your weight and body shape. With the help of treatment, most people can overcome an eating disorder.

In fact, when asked by The Guardian what her greatest achievement was, Gemma stated that recovering from anorexia was just that.

Anorexia nervosa is when individuals try to control how much they weigh by not eating enough food, exercising too much or a combination of both.

Although anyone can get anorexia, it is most common in young women and typically starts in their mid-teenage stage.

For Gemma, this period in her life was the closest she has come to death, and if it wasn’t for her voluntarily checking into hospital she was at risk of being sectioned.

However, looking back on her recovery, Gemma is able to notice that it was this “process” that helped her through, now confidently able to say that her problems with eating are “in the past”.

She continued to say: “Going through psychotherapy — when you come that close to not being around any more and really having to face up to something very difficult at the age of 17, it was a very long process of recovery that can’t do anything but shape you.

“I was weirdly grateful for it in a way. It was a big part of my family’s life. The NHS was incredible and helped me and here I am.”

Treatment for eating disorders are crucial before they get any worse. And although it is difficult to know what to do when concerned about someone who might have an eating disorder, checking in with them is better than ignoring signs.

The NHS state that signs and symptoms of anorexia include the following:

The most used treatments for eating disorders include talking therapies. For adults and older children nearing the age of 18, the most common therapy used is cognitive behavioural therapy (CBT).

If offered, this will usually involve weekly sessions for up to 10 months two sessions in a week in the first two to three weeks. These sessions help you to cope with your feelings, understand nutrition and the effects of starvation, as well as make healthy food choices.

Alternatively, for adults with anorexia, there is the possibility of Maudsley Anorexia Nervosa Treatment, or MANTRA for short. This involves talking to a therapist in order to understand what’s causing your eating disorder. It focuses on what’s important to you and helps you to change your behaviour when you’re ready. You should be offered 20 sessions. The first 10 should be weekly, with the next 10 scheduled to suit you.