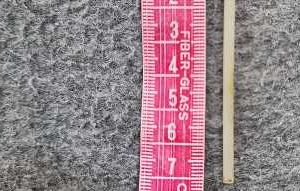 Syrian girl, 2, nearly dies after a 7cm-long lollipop stick which was stuck in her bowels for six months pierced her intestine

A two-year-old escaped death after a lollipop stick that was lodged in her bowels for six months ended up piercing her intestine.

The girl, from Syria, was rushed to hospital after losing consciousness. Doctors said she was cold to touch.

Her parents revealed she had complained of stomach pains the day before, vomited up to eight times and developed a fever.

They also said their daughter, who wasn’t identified, had ingested a lollipop stick six months earlier.

The 2.75in (7cm) stick blocked her windpipe and she was unable to breathe briefly — but doctors at the time uncovered no reason to panic and simply told the parents to monitor her faeces. 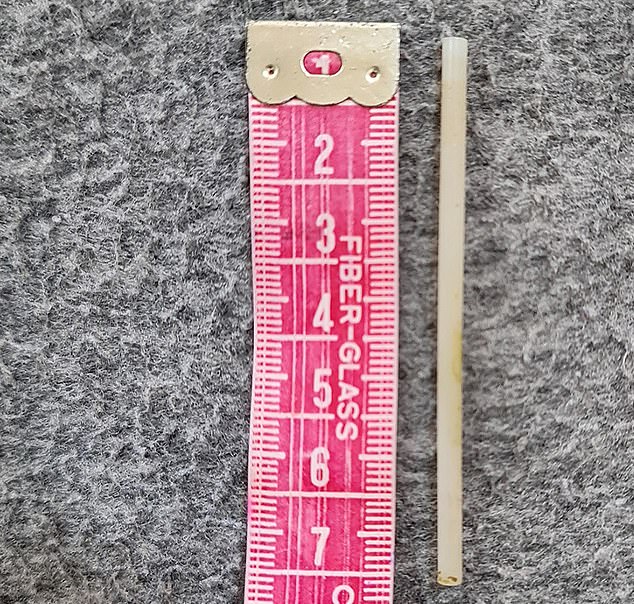 Medics at Aleppo University Hospital gave the unconscious girl an ultrasound to find out the root cause of her ailment.

A build-up of fluid was spotted in the cavity between her intestines and other organs — a tell-tale sign of a perforated bowel.

Surgeons drained the fluids to relieve pressure and allow her blood flow to stabilise before they operated.

A follow-up procedure, which saw doctors cut into her abdomen, revealed the lost lollipop stick had perforated her ileum — the last part of the small intestine.

The hollow stick was removed and they sewed the cut in the intestines up.

She was closely monitored at the intensive care unit for several days before doctors discharged her.

The girl was fully recovered as of April 11, when her case was recorded in a scientific journal.

She narrowly avoided complications that could have killed her if she wasn’t treated properly, they said.

Writing in the journal, they said: ‘An ileal perforation caused after ingesting a foreign object is a rare, life-threatening complication that requires surgical intervention.

‘In our case, the ingested object causing the injury was a hollow 2.75in (7cm) long plastic lollipop stick with a diameter of 2 mm.

‘To our knowledge, this is the first reported case of pediatric ileal perforation due to an ingested lollipop stick.’

The girl’s case was reported in the Journal of Pediatric Surgery Case Reports.

What is gastrointestinal perforation?

What is gastrointestinal perforation?

Gastrointestinal perforation occurs when a hole forms all the way through the stomach, large bowel, or small intestine.

It can be due to a number of different diseases, including appendicitis and diverticulitis.

It can also be the result of trauma, such as a knife wound or gunshot wound.

In rare cases, swallowed objects can make their way through the entire digestive system before piercing the bowel wall.

What are the symptoms?

Can it be deadly?

Yes. A hole in your gastrointestinal system or gallbladder can lead to peritonitis.

Peritonitis is inflammation of the membrane that lines the abdominal cavity.

If bacteria gets into the blood flow, patients can die from sepsis — a life-threatening infection.

Wounds can become infected because of other infections and loss of blood is also a risk factor.

How is it treated?

Surgery is usually performed to close wounds and in cases where the cut has been caused by a foreign object, whatever caused it is removed.

Patients are also given antibiotics to prevent infection and are monitored afterwards to ensure healthy recovery.