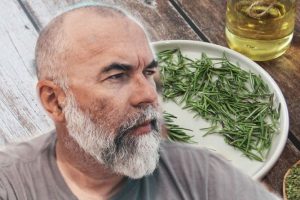 Nioxin speak to women about their experiences with hair loss

Hair loss is a normal part of ageing and is something you have to simply accept will happen, or is it? One method which can be performed at home uses a powerful herb and could help increase hair regrowth. How?

Rosemary is a culinary and healing herb native to the Mediterranean region, where it’s been used as food and medicine for centuries.

Rosemary oil is rich in antioxidants with benefits including anti-inflammation.

In recent years there have been numerous claims that state the oil can be used to help increase hair regrowth and possibly even prevent hair loss.

In one study published in the National Library of Health, rosemary oil versus minoxidil for the treatment of alopecia was further investigated.

The study aimed to investigate the clinical efficacy of rosemary oil in the treatment of androgenetic alopecia (AGA) and compare its effects with minoxidil two percent.

Patients with AGA were randomly assigned to rosemary oil or minoxidil two percent for a period of six months.

“No significant change was observed in the mean hair count at the three-month endpoint, neither in the rosemary nor in the minoxidil group,” noted the study.

“In contrast, both groups experienced a significant increase in hair count at the six-month endpoint compared with the baseline and three-month endpoint.”

Findings of the present trial provided evidence with respect to the efficacy of rosemary oil in the treatment of alopecia.

It was found the extract promoted hair growth in mice that had their back areas shaved.

Researchers suggested that the extract inhibits the “binding of dihydrotestosterone (DHT) to androgen receptors”.

A significant discovery as androgen receptors are proteins which allow hormones like testosterone and DHT to bind to them, thereby causing hair loss.

How to make rosemary infused oil at home

Jojoba oil is recommended rather than coconut oil as the latter is known to clog particles.

The mixture can be put into a glass with a lid and placed in boiling water.

This method can also be used with grapeseed oil.

For other plants which have shown impressive results for hair regrowth the list includes: