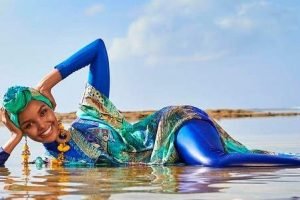 Halima Aden is no stranger to breaking down barriers. This Somali-American first made headlines for wearing a hijab and burkini in the Miss Minnesota USA pageant; she's since walked runways during fashion week and appeared on the cover of British Vogue.

Now, Aden is back in the spotlight, this time for being the first woman to wear a hijab and a burkini in the 2019 Sports Illustrated swimsuit issue.

Health recently had the chance to chat with Aden on set for our "My Mantra" series. Aden says her mantra, "don’t change yourself, change the game," helps her stay true to herself. In the video above and below our Q and A interview, Aden expands on her latest achievement and how she's blazing a trail for other women who look like her.

What made you seek out so many "firsts," and does it get intimidating?

"Growing up, I never got to see anyone who was dressed like me, wore a hijab," says Aden, "and so it was important to me to push myself to be in spaces where I didn’t see anyone who dressed like me. Going back to high school, being homecoming queen, wearing a hijab, being a Muslim girl—it showed other girls that it is okay to go out for choir, it is okay to go out for sports, and even though that’s not necessarily what I intended to do, it just happened."

Moving from high school to college, Aden scored another first: She was the first Muslim woman in the student senate at St. Cloud State University. "Those little things have led me to bigger things, like competing for Miss Minnesota USA wearing a hijab and burkini. So that’s what happens when you don’t change yourself, but you change the game. And you change the game by not changing yourself."

Don’t change yourself .. Change the GAME!! Ladies anything is possible!!! Being in Sports Illustrated is so much bigger than me. It’s sending a message to my community and the world that women of all different backgrounds, looks, upbringings… can stand together and be celebrated. Thank you so much @si_swimsuit & the entire team for giving me this incredible opportunity.

Did you have a breakthrough moment when you realized your message of inclusion could reach more people?

"For me, I always felt like I had so many identities that make up Halima. On one end, I was a child refugee on the other end, I’m Somali American, and on another end, I’m a black Muslim girl who wears a hijab," Aden explains. "So for me, it was important that I always put myself out there. And I wasn’t afraid to be the first and I wasn’t afraid to enter new spaces, because it is going to inspire the girls in my community that have never felt represented. I hope that through my actions, girls take it upon themselves to challenge themselves and also not be afraid to do their own firsts."

How did you feel when you found out about Sports Illustrated?

"I was in shock! Because, you know, it’s [the] Sports Illustrated Swimsuit Issue! It’s iconic! You know, all the women I look up to have been featured in it or covered," says Aden. "From Ashley Graham to Tyra Banks being the first ever African American Model to grace the cover. Chrissy Teigen—these are all my women crush Wednesdays, so to be in that group of women felt absolutely incredible," she continues. "For me, Sports Illustrated Swimsuit Issue represented so much more than just being in a swimsuit, it represented how far the industry has changed."

Why is representation important to you?

"It's important that every little girl [and] every little boy feel like they can look up to somebody, feel inspired by somebody who they can personally relate to," says Aden, who often gets messages from others about how seeing her "firsts" makes them feel less alone. "So for me, I feel like I always say this, I have so many little sisters out there! I get DMs from girls telling me I’m joining sports, I’m doing this, I’m doing that, and it’s because I saw this part in your story."

Aden also strives to educate others about aspects of Muslim culture they may be unfamiliar with. "For a lot of people, they don’t know what a burkini is, they don’t necessarily know what to think of when they hear the word 'hijab.' That’s shattering all the perceptions and that’s exactly what MJ, [the editor behind SI Swim], intended to do with this issue. It's shattering perceptions of beauty and women."

What does wearing a hijab and burkini mean to you?

"I saw my mom wearing it, I grew up seeing so many women that I look up to [and] my relatives wearing it. So that’s how I kind of chose to wear the hijab. It’s a representation of my religious beliefs. And to be honest with you, I feel most confident and most beautiful when I do wear my hijab."

"And then the burkini, I was surprised a lot of people don’t really know that the burkini is a swimsuit. It is just a more modest swimsuit, more covered, but it is a swimsuit, nonetheless. Again, what an incredible opportunity for MJ to showcase that a woman wearing a burkini can literally stand alongside a woman wearing a bikini and that’s beautiful. It’s what you choose, how you feel you’re most beautiful."

Walked (and sort of danced) the runway Friday at #NYFW for @sherrihill in this stunner! Be sure to make a donation to @unicefusa via the link in my bio for your chance to own in! One lucky winner will be able to hang this gown in their closet soon!

How do you deal with negativity and hateful comments?

"The way I deal with internet trolls is [by] just reminding myself that I’m doing the right thing, I’m doing a good job and at the end of the day, these are not people who know my story, these are not people who truly understand me," says Aden. "I always think of the 99%, not that 1% who said something negative, but really the majority of people who are uplifting me, who are sending me good thoughts and good messages." Her advice for others who get blowback from trolls: "Focus on the people who truly matter, who truly support you, and that’s all you need to know."

"I’ll give you guys my little beauty hacks. So my mom growing up, she’s so African, so she would always say, 'if you can’t eat it don’t put it on your skin,' and plus she’s also so cheap so she’s like, “why don’t you just make your own homemade face masks?' Honestly, they work so good for me!" Aden buys organic honey, aloe vera, and turmeric at the grocery store to make masks with. "Just making my own little concoctions of different food," she explains.