Hay fever: Professor Linda advises what to do amid antihistamine medication shortage 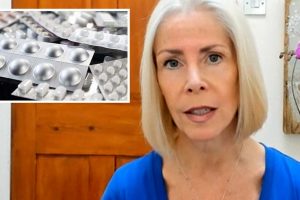 “I know people will be concerned, hay fever is very common,” said Professor Linda, speaking on BBC’s Breakfast. “It commonly starts in the early spring, we have tree pollen and grass pollen and wheat pollen later in the summer.” Now, those suffering from the stubborn symptoms might struggle to get their medicine as Piriton tablets are out of stock.

This has been caused by a shortage of a drug that goes into antihistamines.

The missing part is chlorphenamine maleate, which represents an active ingredient in Piriton medication and other remedies, according to the BBC.

This is now widely limited, with the likes of Boots and Lloyds Pharmacy reporting no stock of the specific tablets.

Professor Linda said: “Hay fever is miserable for people who have it.

“And also, for people, who have pre-existing lung conditions like COPD [chronic obstructive pulmonary disease] and asthma, the pollen in our air can really exacerbate that. It’s a real worry.”

Regarding the hay fever medicine shortage, the professor said: “In terms of this issue, I don’t think people should panic.

“It’s one ingredient – a constituent of common hay fever medicines that people will take.

“These are actually not the first line; they make people a little bit drowsy.

“We’re seeing some shortages of couple of major medicines people know but there are many others that are available.

“We’ve also heard from the Royal Pharmaceutical Society that people shouldn’t be alarmed.

“It’s going to be a short-term shortage, so try and find an alternative if you’re used to taking that medicine.

“Piriton is one of them that’s experiencing a shortage but there will be others [available].

“And people who have hay fever know how to manage that, so not a cause for panic, the situation will improve.”

According to the NHS, some alternative measures for managing hay fever include: applying Vaseline around your nostrils, wearing wraparound sunglasses and showering and changing clothes after being outdoors.

A Boots official said: “There are a very small number of lines that are currently out of stock due to a current, industry-wide shortage of the active ingredient.

“However, we are expecting this to be resolved soon and new deliveries are expected in the coming weeks.”

Asthma and Lung UK has even urged asthma and lung disease sufferers to be careful this weekend.

This recommendation was based on the Met Office’s prediction of high pollen levels across most of England and Wales from Friday onwards.

Dr Andy Whittamore, clinical lead for Asthma and Lung UK, said: “When pollen levels are at their highest this can be deadly for those with lung conditions like asthma who can suffer serious symptoms and have life-threatening attacks.”

“Using your preventer inhalers as prescribed is important as the medicine reduces sensitivity and swelling in the airways, helping to prevent symptoms such as wheezing and coughing before they even start.”