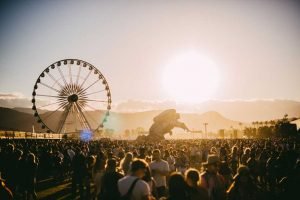 Reported cases of herpes have reportedly increased in areas surrounding the Coachella Valley following the two weekends of this year’s annual music festival.

Dr. Lynn Marie Morski from online herpes treatment service HerpAlert told PEOPLE that they normally handle 12 cases a day in southern California, but during the first two days of the music festival earlier this month they received almost 250 inquires — about ten times more than their average.

HerpAlert is an online service that allows users to send photos of their possible infection for clinical evaluation and prescription treatment.

Morski noted that the symptoms of a new herpes case often show up days later, which could explain why the cases were spread out across Southern California, not limited to the Coachella Valley area, as festival goers returned home after the weekend.

Coachella Valley area hospitals did not immediately respond to PEOPLE’s request for comment.

Both infections are lifelong.

The WHO report, last updated in January 2017, estimates that 67 percent of people in the world under the age of 50 have the first type of herpes, while 11 percent have the second.

Symptoms of herpes include painful blisters, open sores or ulcers around the affected area.