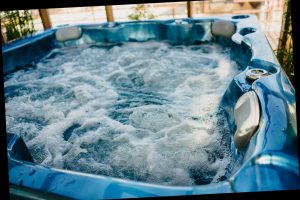 A display of hot tubs at a North Carolina state fair is the likely source of a major outbreak of Legionnaire’s disease, health officials said Thursday.

One person has died from the outbreak, and the North Carolina Department of Health and Human Services (NCDHHS) has confirmed another 115 cases of Legionnaire’s disease that began at the NC Mountain State Fair, which was held Sept. 6-15 in the western part of the state. There are also eight confirmed cases of Pontiac fever, a milder form of the disease, and 80 of the infected people have required hospitalization.

The NCDHHS announced that preliminary findings from their investigation point to a display of hot tubs as the disease source.

A water sample from the Davis Event Center tested positive for Legionnaire’s disease. The illness is a potentially deadly type of pneumonia that spreads when people breathe in the bacteria from mist and water drippings from air conditioning units.

“Taken together, these early findings suggest that low levels of Legionella present were able to grow in hot tubs or possibly some other source in the Davis Event Center leading to exposure through breathing in aerosolized water that contained the bacteria; however, this is an ongoing investigation,” the statement continued.

Dr. Zach Moore, the state epidemiologist at NCDHHS, said that even more people may have developed Legionnaire’s. The current number of confirmed cases is as of Oct. 2.

“Finding Legionella in one water sample is an important piece of the puzzle, but it does not tell us how so many people were exposed at this event,” said Dr. Zack Moore, State Epidemiologist.

As the NCDHHS continues to investigate, the Davis Event Center will be closed and checked for safety.

Moore said that people should be cautious around artificially-made water sources.

“Although Legionnaires’ disease is a rare infection, this is a reminder that the bacteria that cause it are common in nature and can be found in man-made water systems,” said Dr. Moore. “This means it’s very important for owners and managers of water systems that can create aerosols to take steps to prevent Legionella from growing and spreading in water systems.”

END_OF_DOCUMENT_TOKEN_TO_BE_REPLACED

END_OF_DOCUMENT_TOKEN_TO_BE_REPLACED
We and our partners use cookies on this site to improve our service, perform analytics, personalize advertising, measure advertising performance, and remember website preferences.Ok