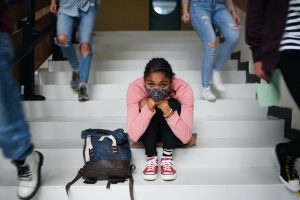 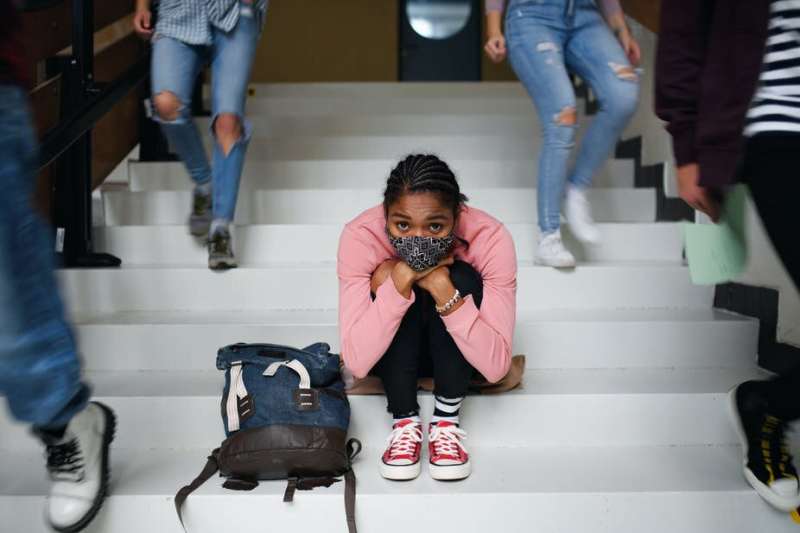 By 2021, South Africa’s unemployment rate was at 44%. Around 55.5% of South Africans were living in poverty. Figures show that in 2021, 10 million people, including 3 million children, lived in a household affected by hunger.

South Africa’s public health system was under-resourced and overburdened even before the COVID-19 pandemic. Healthcare in the publicly funded system is provided by 35% of the country’s doctors for 84% of the population.

Major depressive disorder and anxiety disorders, have drastically increased during the pandemic, with figures from 2020 suggesting that 24% of the population exhibit depressive symptoms.

Adolescents and young people growing up in households with unemployment and lacking income and a regular supply of food are known to experience even greater stress and anxiety than young people in less resource restricted households. Adolescent girls and young women in the poorest communities in South Africa also face additional challenges to their mental health. These include a lack of social support, financial insecurity, and vulnerabilities related to their gender. But services specifically targeted at adolescents and young people are woefully inadequate.

In our recent study we looked at the socio-economic and mental health impacts of COVID-19 on South African adolescent girls and young women. The aim was to understand how the additional challenges brought on by COVID-19 had added to existing risks faced by this population group.

Between November 2020 and March 2021, we conducted a survey and interviews with adolescent girls and young women aged 15–24 years in six districts of South Africa. The young women in our study came from communities with some of the highest rates of HIV, teenage pregnancy and socio-economic hardship in the country. We found that COVID-19 restrictions had led to increased experiences of stress and anxiety. But despite the many hardships, some of the young women showed signs of emotional resilience.

Understanding the strategies that some young women have used to cope with the uncertainty of COVID-19 could point to better ways to respond to their needs.

Our findings show that the COVID-19 pandemic and the lockdown restrictions, introduced by the South African government in March 2020, worsened situations of poverty, unemployment and food insecurity, adding to mental health stressors.

Young women in our study described how households’ loss of income, economic and food insecurity, fear of infection, and death of family members resulted in feelings of frustration, anxiety and depression. Nearly three quarters (71.8%) of young women reported financial problems during COVID-19 and the lockdowns.

Hunger was a major issue, with 75.4% of young women saying they had been concerned about food running out due to lack of money. A quarter said they had gone a day and night without food.

This anxiety related to food supply negatively affected mental health, with 69% of young women reporting they had became more distressed and anxious during COVID-19 and the lockdown.

Young women had not been able to get the emotional support they needed during the lockdowns. They spoke of their experiences of increased tension in the home environment, with fraught family relationships due to lockdown, and family members feeling stressed, frustrated and confined in close quarters.

Fear was a predominant emotion in the narratives of respondents in our study: fear of infection, fear for the health and safety of family, fear related to economic insecurity and future prospects, and fear of leaving home during lockdown due to concerns about police brutality.

Respondents described an overwhelming sense of hopelessness about their current situation, and the future. Young women spoke of having their dreams for the future shattered. Some shared desperate stories of their friends no longer being able to cope, and choosing to end their lives due to a loss of hope that things would ever improve.

On a positive note, some respondents articulated an emotional resilience, describing how they managed to cope in healthy ways and retain hope. Some described taking things one step at a time, accepting their situation and being patient, hoping that things would improve. Respondents also described sources of psycho-social support which enabled them to cope. These included parents, grandparents, and community or faith based groups.

The South African government urgently needs to recognize child and adolescent mental health services as a health priority, and develop appropriate interventions. These should be innovative, cost-effective, scalable and evidence-based. Working through schools and community-based services could be a cost-effective way of increasing access.