How the travel industry is adapting to older travellers 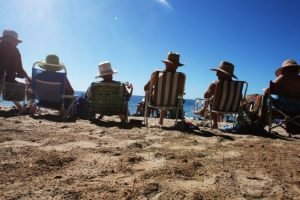 Samantha Flores was having a tough time getting through the airport. The signs were hard to see, the announcements were hard to hear, and the people rushing by made her feel unsteady on her stiffened knees. Finally, with relief, she made her way to a bench to sit down, catch her breath and take off her "age simulation suit."

Flores is director for experiential design for architecture firm Corgan, and the nearly 14-kilogram suit was meant to help her, a 32-year-old, experience the physical challenges of navigating the world as an older person. Goggles and headphones "impaired" her sight and hearing. Gloves reduced feeling and simulated hand tremors. Weighted shoes, along with neck, elbow and knee movement restrictors, approximated mobility limitations. 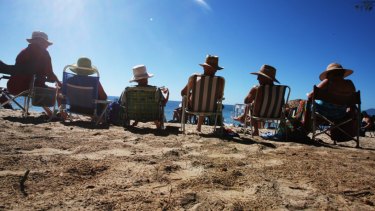 The percentage of the world’s population over 60 will nearly double by 2050.Credit:Peter Braig

Using the suits is one way designers who work with airports and the travel industry in general are starting to look at creating spaces for different groups of people. And older people are one group whose numbers are growing.

According to the World Health Organisation, the percentage of the world's population over 60 will nearly double by 2050, rising to 22 per cent from 12 per cent.

While some design adaptations for older travellers might seem obvious, like benches placed for frequent rest stops, others are not as intuitive. Research conducted by Corgan found that elderly people were more likely to look down while they were walking, which means they could miss directional signs above their heads. So the company suggested that its airport clients place more information closer to the ground. It also found that older air travellers often head straight for their gate to reduce anxiety about missing flights, so they bypass the main concession hubs. The firm recommends that airports add more food options near the boarding areas.

The firm also found that shiny floors should be avoided because they can appear wet and cause people to worry about falling.

Donald Hoover, associate director of Fairleigh Dickinson University's International School of Hospitality and Tourism Management in New Jersey, said the leisure and tourism industries would do well to focus on this group. They "must consider the disabilities related to aging and keep them in mind when designing and creating anything associated with the guest experience," he said.

Hoover said many of the changes could benefit travellers of all ages. At hotels or airports, for instance, shortening the time spent waiting in line to check in, training staff to recognise and act on guests' special needs, or designing simpler websites and more ergonomic bathrooms could improve everyone's experience.

Some adaptations are more technical. A few airports in the United States have begun installing special systems that transmit announcements directly to the telecoil receiver in a user's hearing device, allowing those with hearing aids to more easily understand announcements at the gate.

A handful of airports, including Los Angeles and Seattle-Tacoma, have recently begun offering Aira, glasses for low-vision or blind people. The glasses connect through Wi-Fi to allow a trained guide to see what the wearers are seeing and help them navigate through the airport, identify luggage and accomplish other tasks. Kevin Phelan, vice president of sales and marketing for the company, said its top requests from older people using its service in hotels and Airbnbs are to do a walk-through so they can avoid tripping hazards and to adjust thermostats.

Hotel companies like Marriott International say they are also keeping an eye on travel trends among older guests. Toni Stoeckl, vice president of distinctive select brands at Marriott International, said one of the brands, Element Hotels, was introducing "Studio Commons" this year — units with four rooms positioned around a single common area. The concept was developed partly in response to a rise in multi-generational family trips. In the new rooms, he said, "baby boomers can have their own private room but still share a common living area with kids or grandkids."

Small businesses that cater to tourists are also taking steps to become more elder-friendly. Miceal O'Hurley, proprietor of Fantastic Flavours Ice Cream Parlour in Youghal, Ireland, estimates that almost half his customers are retirees from the United States and Europe. Last year, he worked with older people and architects to evaluate each aspect of his customers' experience and went beyond eliminating tripping hazards and installing better lighting.

O'Hurley said he widened door frames to accommodate walkers and people being assisted by a friend. He bought sturdier table bases so customers could lean on them when rising from a chair and removed some furniture to make the space easier to navigate. The store installed sound dampeners to drown out the sharp sounds and moderate the high frequencies that had caused older travellers to turn down their hearing aids.

"It was a lot to do," O'Hurley said. But, he added, it was also important "as the average age of travellers increases."

Jimmy Carroll, co-founder of travel expedition company Pelorus, said he has found that as multi-generational travel has become more popular, grandparents "don't want to miss out on anything." He said his staff tried to find ways for everyone to participate in activities. On one family's trip to Costa Rica, for instance, a grandmother travelled along in a submersible vehicle with a pilot while her grandchildren snorkeled around her.

Pelorus also arranges experiences for its older clients with the goal of "having them do something they thought was no longer possible," Carroll said.

Aixa Ritz, who researches sustainable tourism at Fairleigh Dickinson's hospitality school, said people's "definition of adventure changes as we get older." She is 72, and refers to herself as a "senior boomer." She said she and her friends were still excited to see new places, "but we want everything taken care of".