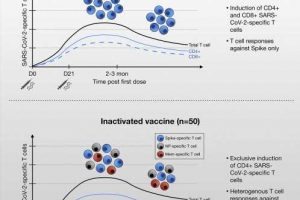 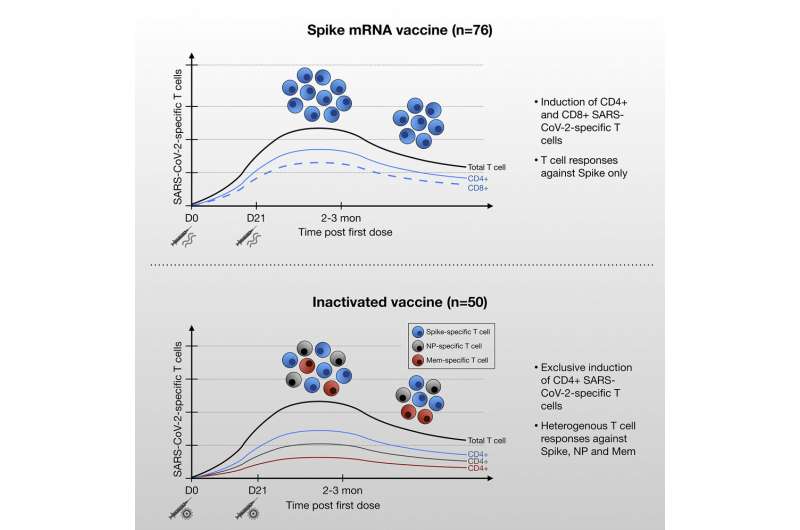 The total magnitude of the T-cell responses induced by mRNA and inactivated SARS-CoV-2 vaccines are comparable; however, the similarity ends here, according to a new study led by Duke-NUS Medical School scientists.

They found that the inactivated vaccines, which expose the immune system to the entire non-viable virus, elicit a broad immune response against different proteins on the virus. Publishing in Cell Reports Medicine, the findings add to the growing literature that will help scientists improve vaccine strategies for an ever-changing virus.

“Inactivated SARS-CoV-2 vaccines were used extensively in Asia, but are often considered inferior due to their induction of a lower antibody response compared to other types of vaccines,” said Dr. Anthony Tanoto Tan, Senior Research Fellow with the Duke-NUS’ Emerging Infectious Diseases (EID) Program and a senior co-author of the study. “This means that they might not have been as good at preventing infection, but several studies have shown that they are highly capable of thwarting the development of severe COVID-19.”

The research team compared the T-cell immune response in blood samples from people who received inactivated SARS-CoV-2 and spike mRNA vaccines. While mRNA vaccines can only induce T cells targeting SARS-CoV-2’s spike protein, which contains numerous mutations in the omicron variant, the inactivated vaccines stimulated a broad T-cell response not only against the virus’s spike protein, but also the membrane and nucleoprotein that has much fewer mutations in omicron.

“This combination of membrane, nucleoprotein and spike-specific T-cell response is quantitatively comparable to the sole spike T-cell response induced by the mRNA vaccine. It also effectively tolerates the mutations characterizing the omicron lineage,” said Ms. Joey Lim Ming Er, first author of the study and a second-year student Ph.D. with the Integrated Biology and Medicine Ph.D. track at Duke-NUS.

However, unlike the mRNA vaccines, the inactivated virus vaccines did not appear to trigger cytotoxic CD8 T cells known for their ability to kill virus-infected cells. They mainly stimulated a type of T cells called CD4 T helper cells. When these T cells recognize a viral antigen, they release chemicals, called cytokines that helps the activation other types of immune cells, hence their name.

Senior author of the study Professor Antonio Bertoletti from Duke-NUS’ EID Program said, “The omicron variant can effectively evade antibody neutralization, moving the evaluation of vaccination efficacy away from preventing infection and towards ameliorating disease. T cells are likely to play a more important role in this compared to antibodies, due to their ability to target virus-infected cells.

“Since inactivated SARS-CoV-2 vaccines can generate T cell responses towards other viral proteins, this more heterogenous response could be beneficial, in comparison to the current Spike targeting strategy of other vaccines. However, larger studies are needed to clarify the impact of these T cells responses in SARS-CoV-2 pathogenesis to better design vaccines for controlling severe COVID-19 after infection by omicron or future variants.”