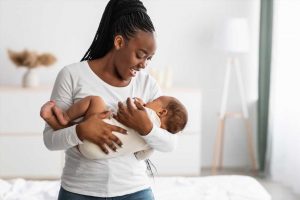 In a recent study published in the Proceedings of the National Academy of Sciences journal, researchers assessed the impact of infant-directed singing on the social visual behavior of the infant.

When children are young, caretakers sing to them to calm, appease and engage them. This is how music begins to play a part in social bonding. Infant-directed singing is a universal occurrence that fosters affiliative bonding across cultural boundaries. Infant-directed singing focuses the infant's attention, controls their level of arousal, and eases their suffering.

Singing to babies helps caregivers feel more emotionally connected to their infants and controls their own levels of arousal. The process of physiological entrainment is a promising candidate as a potential mechanism through which infant-directed singing may promote social behaviors.

Infant-directed singing was presented to 56 two-month and 56 six-month-old infants. To construct an explicit, unidirectional test of baby entrainment, audiovisual (AV) recordings of infant-directed singing were employed. The speed, amplitude, and pitch of nursery rhymes like "Twinkle, Twinkle Little Star," and "Old MacDonald" with naturally occurring variations were performed by amateur singers. AV recordings were sampled at 44.1 kHz, while the video was recorded at 30 frames per second. A total of nine AV recordings were utilized, with each recording lasting almost 24 seconds

The rhythmic structure of the singing was quantified by categorizing the vowel timespans of the metrically significant syllables in each song, which were referred to as "beats" for simplicity. Coding was performed by visualizing each speech spectrogram and waveform and using interactive playback. A total of 227 beats were provided throughout the nine recordings.

Eye areas were bitmapped in each video frame corresponding to each singing caregiver. To determine whether average levels of eye-looking were adjusted in time to the caregiver's singing rhythmic structure, eye-tracking technology (ISCAN) was employed to measure infants' visual scanning. Using phase plots and Lissajous curves, the team assessed the timing of synchronized responses of the infant and the caregiver. The team also investigated whether newborn singing rhythms and eye movements synchronized. The timings associated with eye fixations concerning the timing of metrically strong beats of the song for each age group were also determined.

Infants' increased eye-gazing was time-locked with the caregiver's singing rhythm among infants aged two and six months. The team also discovered that the phase of each reaction was strikingly time-aligned to the beat. This was evidenced as individual eye-looking reached its highest value at 58.9% and 32.1% for six-month-old and two-month-old infants within 108 ms of the beat, respectively.

Additionally, within-group comparisons and levels that were expected by chance revealed that the level of looking increased almost twice at two months but by more than four times at six months. These variations supported that rhythmic entrainment for social adaptive action was detectable by two months of age and before becoming increasingly significant by six months while reflecting motor maturation between two and six months.

Results concerning beats were considerably different from those for high amplitude and high frequency. Instances of high amplitude and high frequency can occur separately from moments of rhythmic importance. However, they are both essential prosodic indicators of communicative emphasis and relate to the stimulus's rhythm. As a result, they offer related but occasionally dissociable communicative cues. Neither high amplitude nor high frequency was sufficient to regulate eye-looking by infants in the two-month or six-month age groups when examined as discrete putative drivers of infant eye-looking.