Home » Health News » Inflammation caused by COVID-19, rather than the virus itself, may lead to loss of smell

Inflammation caused by COVID-19, rather than the virus itself, may lead to loss of smell 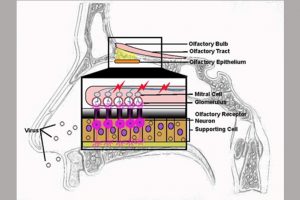 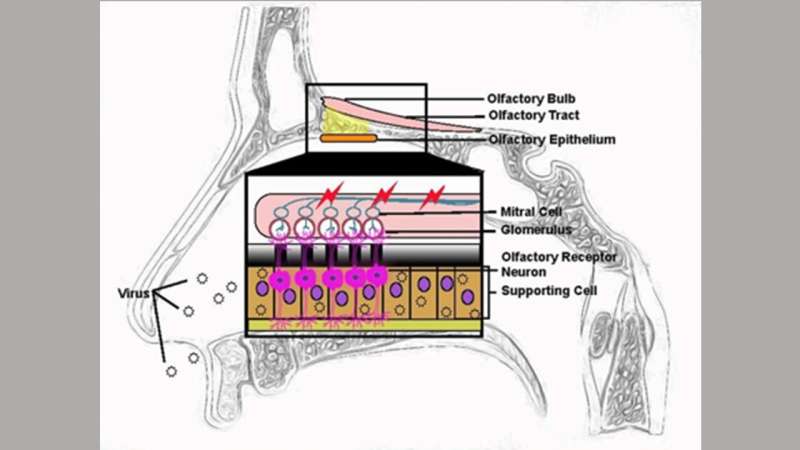 Anosmia, the loss of smell, is a frequent and often long-term symptom associated with COVID-19 that can severely burden a person’s quality of life, making it extremely difficult to taste foods, detect airborne hazards in the environment and carry out other functions dependent on the sense.

While the devastating impacts of COVID-mediated anosmia are well known, the biological mechanisms underlying the condition remain somewhat of a mystery. In a study published today in JAMA Neurology, a Johns Hopkins Medicine-led team shows that loss of smell is most likely a secondary consequence of inflammation occurring when the body’s immune system responds to SARS-CoV-2 infection rather than a direct action of the virus.

“As a neuropathologist, I wondered why smell loss is a very common symptom with COVID-19 but not with other respiratory diseases,” says study lead author Cheng-Ying Ho, M.D., Ph.D., associate professor of pathology at the Johns Hopkins University School of Medicine. “So, we decided to dig deeply into the mechanics of smell to see what actually occurs at the cellular level when SARS-CoV-2 invades the body.”

To conduct their investigation, Ho and her colleagues collected tissues from the olfactory bulb at the base of the brain—a region that transmits nerve impulses carrying information about odors—of 23 persons who died from COVID-19 and a control group of 14 who died from other causes and who had no detectable SARS-CoV-2 at the time of their deaths.

All of the tissues were evaluated for any detectable SARS-CoV-2 particles; the structure and characteristics of the cells, blood vessels and neurons (nerve cells) within them, using both light and electron microscopy; and the number of axons (the portions of neurons that transmit electrical impulses) present. Information about sense of smell and taste was obtained from clinical records for three patients and from family interviews for the rest.

Three of the 23 patients with COVID-19 were determined to have lost their sense of smell, four had diminished ability to smell and two had loss of both smell and taste. None of the 14 patients in the control group were identified as having lost either smell or taste.

The researchers wanted to learn three things from their study of the two groups: the levels of degeneration (damage) to the neurons in the olfactory system, the amount of olfactory axons lost and the severity of microvasculopathy (disease of the small blood vessels). What they found, Ho says, was not unexpected.

“When we compared the tissues from patients without COVID-19 with those from persons who had been infected with SARS-CoV-2—especially the ones with diminished or complete loss of smell—we found that the group with COVID showed more severe vascular injury and far fewer axons in the olfactory bulb,” says Ho. “And that didn’t change when we statistically controlled for the impact of age, strongly suggesting that these effects aren’t age-related and therefore, are linked to SARS-CoV-2 infection.”

However, Ho says the researchers were surprised by the study’s other major finding—that despite nerve and vascular damage, SARS-CoV-2 particles were not detected in the olfactory bulb in the majority of patients with COVID-19.

“Previous investigations that only relied on routine pathological examinations of tissue—and not the in-depth and ultrafine analyses we conducted—surmised that viral infection of the olfactory neurons and olfactory bulb might play a role in loss of smell associated with COVID-19,” she explains. “But our findings suggest that SARS-CoV-2 infection of the olfactory epithelium leads to inflammation, which in turn, damages the neurons, reduces the numbers of axons available to send signals to the brain and results in the olfactory bulb becoming dysfunctional.”

The researchers next plan to do a follow-up study on tissues taken from patients who died of the SARS-CoV-2 Delta and Omicron variants.