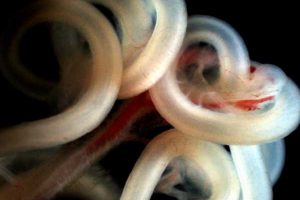 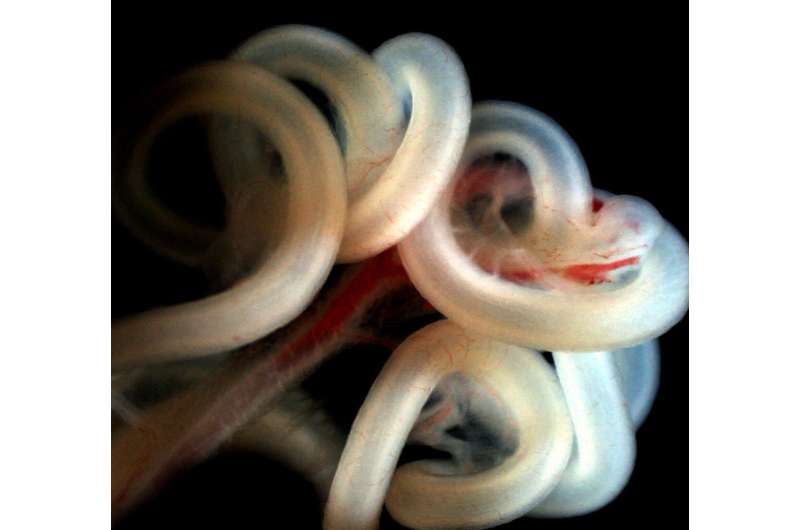 Our guts, and all our organs, are arranged in left-right asymmetric patterns inside our bodies, so that everything may fit.

At the same time, development of organs such as the intestine is anything but haphazard. In healthy embryos, rotation of the gut during development always occurs in a counterclockwise direction and is perfectly timed. It’s a complicated process that scientists have long worked to understand.

Now, a study published in the journal Science finds that gut rotation during development is orchestrated by two waves of expression of a transcription factor called Pitx2. The second wave, it turns out, is triggered by mechanical cues within an elastic tissue that anchors the gut tube, and later becomes a conduit for blood and lymphatic vessels that supply the gut tube.

The findings have important implications for understanding the basic mechanisms of how organs form, which could aid efforts to diagnose and prevent birth defects, such as intestinal malrotation and volvulus, where developing intestines become twisted and strangle themselves.

“The entire gastrointestinal tract is one tube that absorbs all of our nutrients, and it’s giant, so it has to loop to fit inside our body,” said Natasza Kurpios, associate professor of molecular medicine in the College of Veterinary Medicine and senior author of the study. Bhargav D. Sanketi, a doctoral student in Kurpios lab, is the paper’s first author.

“What we found years ago is that looping is highly conserved and it’s very, very regulated,” Kurpios said.

It turns out that organs such as the heart, liver, lungs and gut (intestines) are all asymmetrically situated—found on one side of the body, or spanning the left and right, but not centered. Understanding how the gut forms with left-right asymmetry could reveal patterns of development found in other organs, such as the heart.

Previous work has shown that a gene called Nodal induces the first wave of Pitx2 to establish the early body plan. But Nodal’s presence is short-lived, and once it stimulates Pitx2 expression, it disappears before gut rotation occurs. So, for a long time it has been unknown how Pitx2 stays active to direct gut rotation when Nodal is gone. “Our first surprise was that Pitx2 expression actually goes away and then it comes back as the gut tube is ready to loop,” Kurpios said. “And so the question was, what wakes Pitx2 up?”

The researchers found that a sensor, TGF-beta, lies latent until it gets activated by mechanical forces. In the case of the gut, this is dictated by the dorsal mesentery which attaches to and holds the gut tube in place. To direct rotation, the dorsal mesentery tissue dramatically expands on the right side and compacts on the left. When it does so, TGF-beta senses these changing forces and activates expression of a second wave of Pitx2, which stimulates gut tube looping. In other words, the wave of Pitx2 that establishes body asymmetry is different from the wave that rotates the gut.

In the study, the researchers used engineered mice and chicken embryos, which allow Kurpios and colleagues to open a little window in the egg shell so they can view development and manipulate gene expression.