Home » Health News » Is a 'Fetal Heartbeat' Really a Heartbeat at 6 Weeks?

Is a 'Fetal Heartbeat' Really a Heartbeat at 6 Weeks? 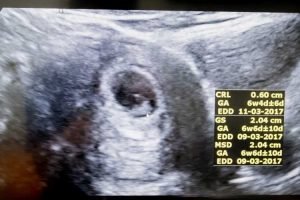 So far this year, four U.S. states have passed laws banning abortions when a fetal heartbeat can be detected, at around six weeks of pregnancy; several additional states are also considering these so-called heartbeat bills.

But what exactly do we mean when we talk about a "fetal heartbeat" at six weeks of pregnancy? Although some people might picture a heart-shaped organ beating inside a fetus, this is not the case.

Rather, at six weeks of pregnancy, an ultrasound can detect "a little flutter in the area that will become the future heart of the baby," said Dr. Saima Aftab, medical director of the Fetal Care Center at Nicklaus Children's Hospital in Miami. This flutter happens because the group of cells that will become the future "pacemaker" of the heart gain the capacity to fire electrical signals, she said. [Are You Pregnant? 12 Early Signs of Pregnancy]

But the heart is far from fully formed at this stage, and the "beat" isn't audible; if doctors put a stethoscope up to a woman's belly this early on in her pregnancy, they would not hear a heartbeat, Aftab told Live Science. (What's more, it isn't until the eighth week of pregnancy that the baby is called a fetus; prior to that, it's still considered an embryo, according to the Cleveland Clinic.)

It's been only in the last few decades that doctors have even been able to detect this flutter at six weeks, thanks to the use of more-sophisticated ultrasound technologies, Aftab said. Previously, the technology wasn't advanced enough to detect the flutter that early on in pregnancy.

The heart still has a lot of development to undergo before it is fully formed. Indeed, the entire first trimester of pregnancy is a time of "organogenesis," or the formation of organs, Aftab said.

After the detection of the flutter at six weeks, the heart muscle continues to develop over the next four to six weeks, undergoing the folding and bending that needs to happen for the heart to take its final shape, Aftab said.

"A lot of the heart development is still ongoing" during the first trimester, she said.