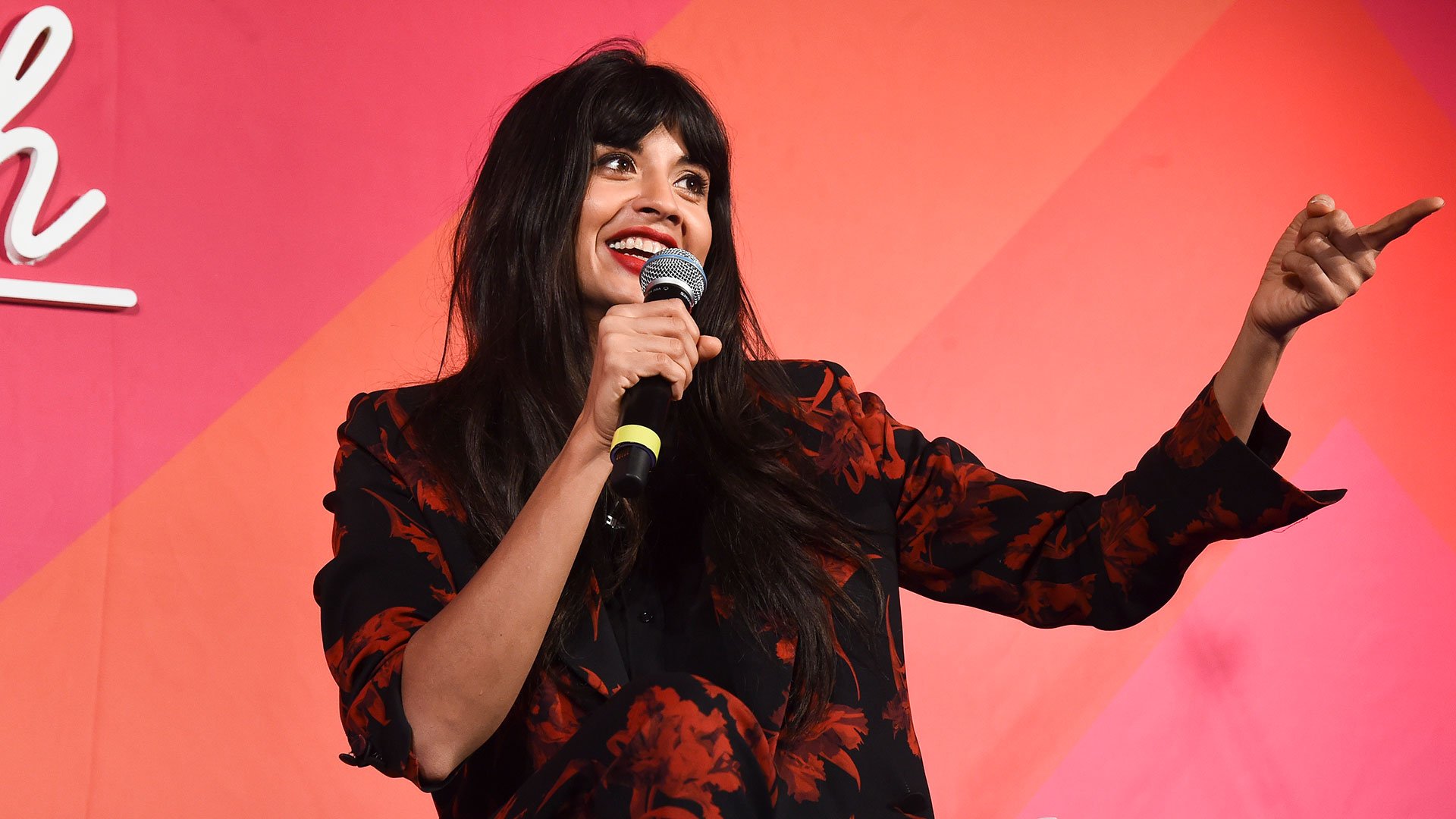 At this point, we already know that Jameela Jamil is a complete badass superwoman who has been a voice of power and reason for years. Through her “I Weigh” movement, she has changed the way a lot of people look at their own value: namely, that it has nothing to do with numbers on a scale. And The Good Place star hasn’t stopped there, calling out corporations who profit off shaming people about their bodies. Fortunately, our favorite F-bomb-dropper and self-proclaimed “feminist-in-progress” isn’t going to be quiet any time soon.

Jamil, a 2019 Voices of the Year award winner did not hold back at #BlogHer Health 2019 in Los Angeles, where she sat down with SHE Media CEO Samantha Skey to talk about some of the many ways society tells women we’re flawed, and then makes money off of us — as well as the criticism she has received for speaking up.

Some of the backlash Jamil has faced is about her own size. In short, she — like any other woman who tries to get society to rethink how we value people — is never “the right size” to talk about it.

When she started talked about body image six or seven years ago, she had gained weight because of a medication she was taking and was publicly fat-shamed. While Jamil did get some media attention for her activism, it was nothing compared to the coverage she receives today — and she said that is big part of the problem.

“We don’t listen to the body positive activists because when a bigger woman speaks out against the way that society and this industry and everyone around us shames us, we just call them ‘jealous’ and ‘bitter’ and you victim-blame them and make them feel like they’re a failure,” she explained. “Suddenly, a slender actress on an NBC sitcom says it and everyone acts like it’s the first time they’ve ever heard it.”

But of course, the patriarchal bullshit doesn’t end there: now Jamil is being told that she can’t talk about body image because she is slim and beautiful. Fortunately, she is quick to call out why that isn’t only ridiculous, but another way to keep women in their place.

And it’s not just a matter of silencing women’s voices — Jamil also points to how so much of our culture is designed to make us afraid of and hate our own bodies.

“It’s a very aggressive movement against us — advertising, media, the shaming, the fear mongering,” she said. “I’ve got enough fucking things to be afraid of. Like, I’m afraid of rape. I don’t want to be afraid of an armpit vagina.”

Again, Jamil is speaking from her own experience. She opened up about struggling with anorexia as a teenager and still dealing with body dysmorphia as an adult. Now she’s committed to using her voice in the hopes that others aren’t affected in the same way.

“I messed my body up so much, I’m still only just starting to recover from this, and so are more actresses and most models. And they’re not telling you what they’re going through,” she said. “And shame on them — we have a responsibility. People look up to us. If you’re on Instagram and if you’ve got thousands of followers and those followers are young and you have a platform, use it responsibly or just go to hell where you belong.”

Yes, she was talking about the so-called “flat-tummy” or “detox” teas, which are really just very potent laxatives. In the past, Jamil has criticized celebrities like Cardi B for promoting a product that essentially tells women that we need to shit our way to being thin and beautiful.

The good news is, Jamil thinks we’re starting to wake up from this haze of blindly believing messages telling us we’re not good enough — many of which come from men.

“Men own the corporations, men own the magazines. Even if a woman’s the editor, she’s answering to a man at the top,” she explained. “Men own loads of the huge brands that we’re being shamed into buying. It’s just like we’re being attacked by dicks all the time. Dicks.” 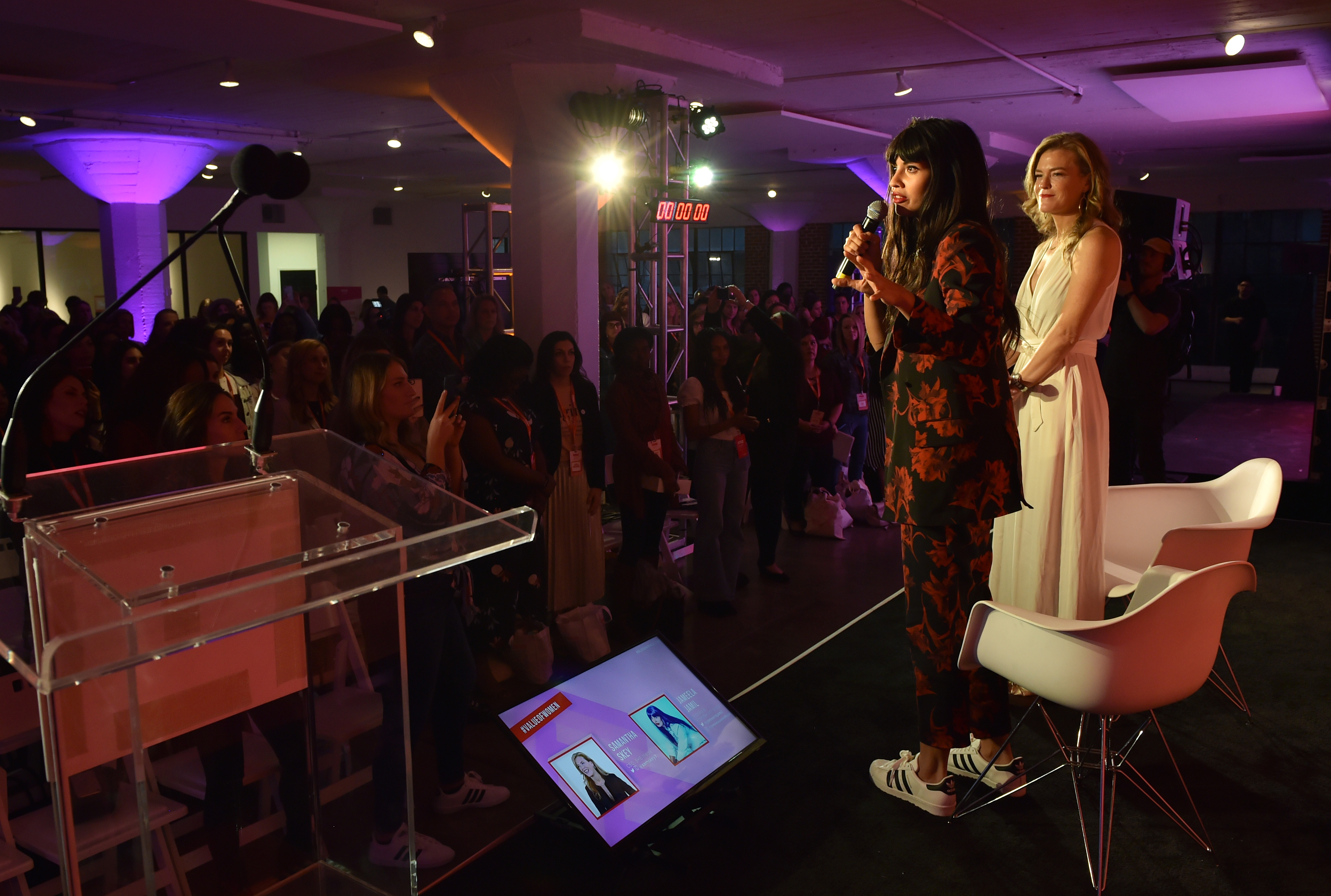 Jamil said that it took her until the age of 30 to learn how to love herself and realize that all the self-hated caused her to miss crucial parts of life.

“I’m so lucky this body has kept me alive through everything, and got me here today and let me say ‘fuck’ on this stage,” she said. “We’re never taught to be grateful, because if we’re grateful then we become content. And if we become content, then we won’t need to consume.”

And Jamil points out that there’s nothing wrong with buying things you need and companies selling products, but “if you need to shame someone into thinking they need to buy your product, this is fucked, and you’re selling the wrong product and you have the wrong advertising agency.”

So how does Jamil decide which companies to go after? For this, she turns to her “I Weigh” community of activists, who call attention to corporations or ad campaigns that they consider toxic. If enough people complain about the same thing, Jamil first researches the background of the company and what they’re selling, and then goes after them using her social media platforms — and wins.