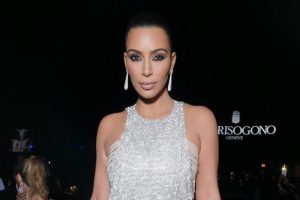 Since the premiere of Keeping Up With the Karashians, it’s been understood that there’s no sense of TMI among most reality TV stars. Newly filed under: Information We Really Did Not Need to Have, Kim Kardashian shared on Instagram Wednesday a story that shared specific details on her body — breaking down her bone density and body-fat percentages for her 327 million followers on the app.

And I think I speak for a lot of the Internet when I say: Uh, cool? But, also, m’am this is an Arby’s.

In her story on Wednesday, Kardashian posted a photo of a body scan she had done via a Bodyspec van, noting that the service measures “your bone density and body fat percentage & all the good stuff to make sure you are fit and healthy.”

She took viewers inside the van and also hear her results. Alongside the image of her body (with the now-iconic Kim K silhouette on display), she discussed how her body has changed in the last year: “So a year ago my body fat percentage was 25 percent and now it’s 18.8 percent.” Which the person conducting her scan said was considered, per their percentiles “athlete category.”

Now, we’re not in the business of being weird about people getting more intel about their bodies. That’s objectively good when it’s used to think more holistically about your health and not contributing to negative or toxic attitudes about bodies. And it’s also pretty solid to see someone looking at their body in a way that goes beyond a the reductive and less-than-helpful metrics of BMI (which is inaccurate at best and problematic/harmful at worse) or just whatever is on the scale.

But there’s still a level of discomfort with the very public nature of dropping these details as an incredibly wealthy person who has absolutely no barriers to nutrition, fitness and cosmetic surgery (ex: Kim has a “favorite laser,” so take that as you will) and perpetuating the idea that a loss of body mass as a thing worth commending (or commenting on) in its own right.

Likewise, following the controversies around Kim K and weight loss (and arguably extreme beauty/youth-seeking measures) over the last year, the emphasis on body fat and lauding the loss of it can feel particularly challenging. I don’t believe bodies should be a battleground for discourse, but I also believe that there are ways we can meaningfully engage with our health (and what we choose to publicly curate re: it) without veering into territory that does more harm than good.

Before you go, check out our favorite quotes to inspire positive attitudes about food and bodies: