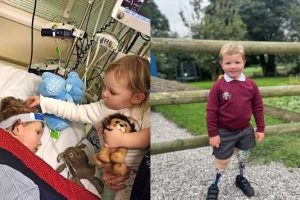 Loose Women: Jason Watkins on symptoms for sepsis in children

Now William is happy at school and competed in the LimbPower Junior Games in June – run for those who have suffered amputation and impairments. 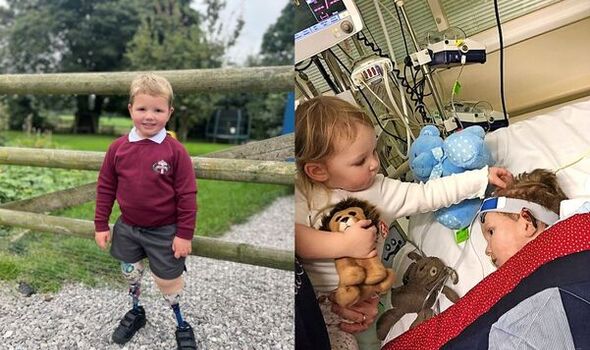 Proud mum Gemma, 32, said: “That was thanks to Georgia. We wanted to wrap him in cotton wool, but she was just happy to have him home and wanted things to go back to how they had been so it spurred him on.

“They have the most incredible bond and are always there for each other.”

William, six, got sick in January 2020 so Gemma and father Mike, 41, took him to the GP. But he went downhill quickly as medics at Queens Medical Hospital in Nottingham said he had ­sepsis, as a result of having scarlet fever.

“He deteriorated so fast,” said Gemma. “Within hours his heart had stopped and we were told we may have to say goodbye. But he hung on. Each time we left his side, we expected someone to tell us the worst.”

In eight days of battling for his life, William suffered kidney failure and two areas of brain injury.

His hands and legs had started to turn black from blood poisoning. Doctors amputated his legs and nine fingers. Ten days later William was allowed home to be with his younger sister Georgia, now four.

Gemma, from Nottingham said: “He was ­desperate to be a big brother to Georgia again, and to do that he needed to walk on his ­prosthetic legs. It gave him a goal.

“She would toddle off and call for him to follow. He was desperate to keep up. He did so well and it was a proud moment when he was able to walk into school.”

William’s kidneys made a full recovery and he is not showing any signs of brain injury. His mum said: “He never stops smiling. He doesn’t let anything get him down.

“He’s always asking questions about everything and loves dinosaurs and animals – we call him our mini David Attenborough.”

People should act quickly when sepsis strikes, urged Gemma. “It can literally save lives.”

William is enjoying life again – thanks to Georgia. Gemma said: “She will fight with him over toys but he would have never made such progress without her. She literally encouraged him every step of the way.”