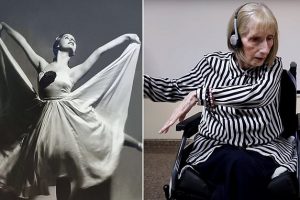 Her frail hand flutters hesitantly, and a shadow passes over her pale face. Then, as the orchestral brass begins to soar, playing the spine-tingling melody of Tchaikovsky’s Swan Lake, something spellbinding happens.

For a little longer than a minute, dementia-stricken Marta Cinta Gonzalez is once more a prima ballerina. Listening to the music through headphones, she is transported back to the New York stage where she performed in the 1960s. Her long, elegant limbs form graceful arcs, her neck and shoulders no longer slumped into the back of her wheelchair. Her face is poised, eyes vibrant and focused.

The emotional moment was captured on film by the Asociacion Musica para Despertar, a Spanish charity which uses music from dementia patients’ lives to improve their mood and memory. 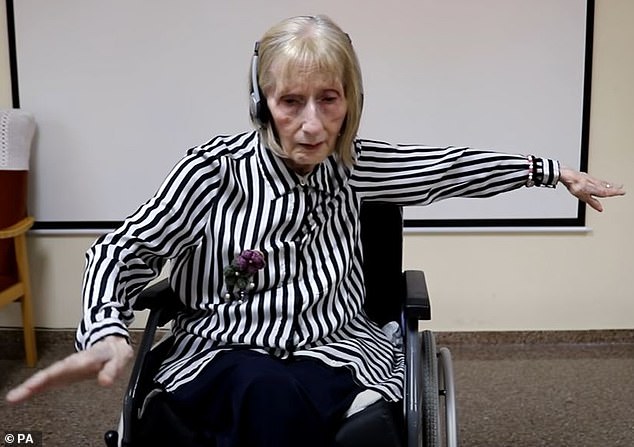 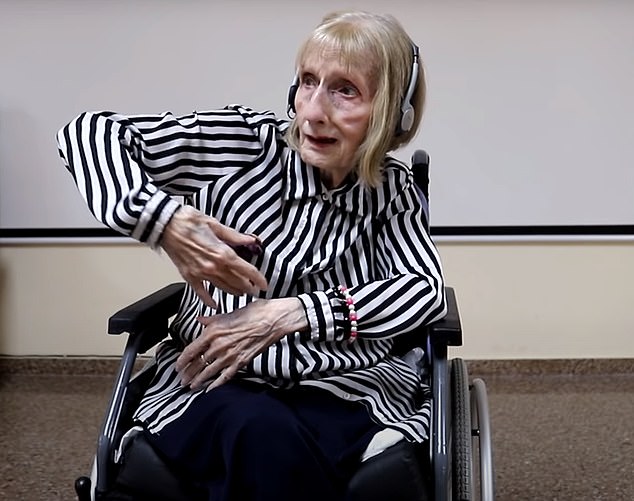 Ms Cinta, who was living in a care home in Valencia, Spain, died last year. But the footage, shared online last week, has moved millions of people around the world, including Hollywood A-listers Sir Ian McKellen, Jennifer Garner and Antonio Banderas, who wrote that it would serve as ‘a well-deserved recognition of her art and her passion’.

As mesmerising as it was, it is only the latest example of the powerful effects of music on those with dementia, suggesting our connection to music stays with us despite any mental illness.

And, even more remarkable, science is finally beginning to unlock the mysteries of why music has such a profound effect, and may open up areas of the brain otherwise lost to neurological damage.

The equally moving story of former music teacher Paul Harvey, from East Sussex, captivated hearts a fortnight ago after his son, Nick, posted a video online showing how his father came alive when asked to improvise melodies on the piano. It attracted 1.8 million views overnight and the 80-year-old now has a charity single, Four Notes, topping the charts after it was recorded with the BBC Philharmonic. It all stemmed from Nick’s realisation that music brought his father ‘back to himself’.

Loved-ones and carers who support the 850,000 people in the UK living with dementia will no doubt recognise the phenomenon.

The power of music to improve the lives of those with dementia – and those who care for them – has long been noted. The Ancient Greeks believed in music and the arts as therapy and, today, music therapy is often used as part of dementia treatment. 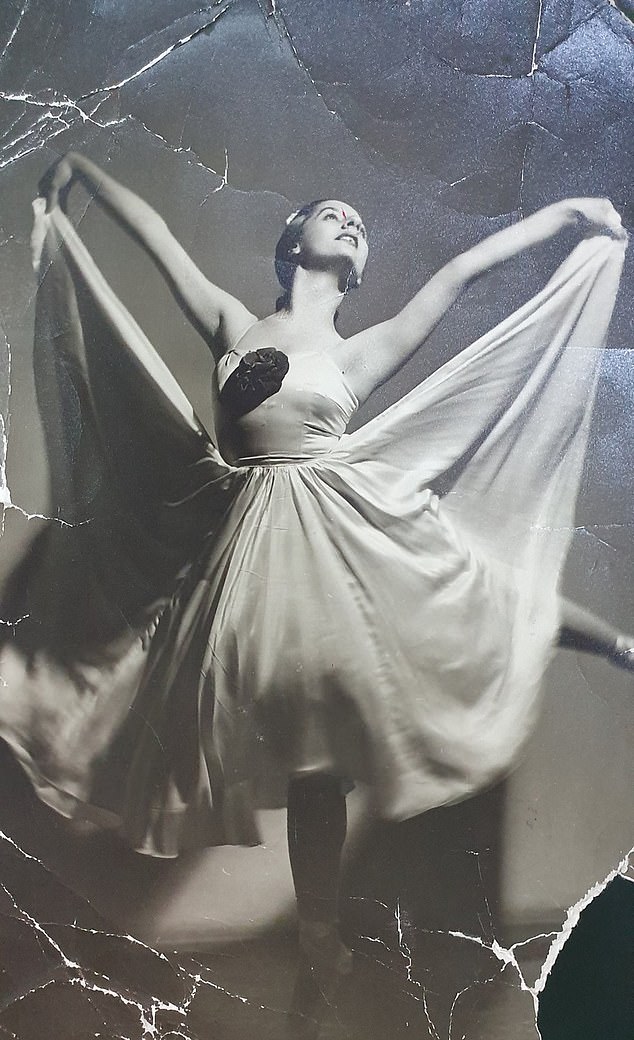 There is plenty of anecdotal evidence that it can bring pleasure when little else seems to. And a growing body of scientific research suggests it can relieve common dementia symptoms such as wandering, agitation, aggression, mood swings and anxiety, while also improving speech and language.

Research by the charity Playlist For Life even found that dementia sufferers exposed to their favourite music were able to reduce by 60 per cent their reliance on antipsychotic medication, which controls symptoms but has serious side effects. It led to Health Secretary Matt Hancock last year pledging that more people living with dementia would get access to music and dance sessions.

These services are ‘not a nicety, they’re a necessity’, insists Grace Meadows, programme director for Music For Dementia, a group which campaigns for music to be part of dementia care because it is so effective at alleviating its debilitating symptoms. The Alzheimer’s Society already runs Singing For The Brain sessions while ‘dementia choirs’ have been formed, including one in Nottingham which became the subject of a BBC documentary with Line Of Duty actress Vicky McClure.

Participants found that singing boosted their confidence and improved communication and wellbeing. In research carried out for the documentary by Professor Sebastian Crutch, a neuropsychologist at the Dementia Research Centre, University College London, members of the choir were given brain scans which showed that listening to music opened up neural pathways, creating or improving connections between cells and making the brain more active.

Brain cells are known to have neuroplasticity – the ability to adapt to changes or damage – which is why stroke patients and those who suffer brain damage can relearn skills. But what has been less well understood, and is still under-researched, is how and why music seems to have such an impact – not just on mood, but on the brain’s ability to recover skills such as dancing and piano playing when it struggles to recall a conversation that might have taken place just ten minutes earlier. 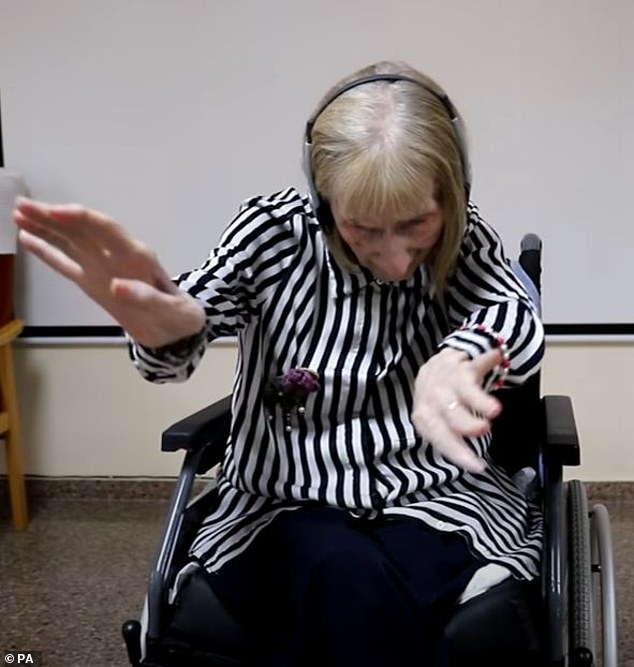 When prompted by a certain song, people with dementia will recall vivid details about, say, going to a concert in their youth

As Prof Crutch notes: ‘The brain is complicated. Anyone with a loved one with Alzheimer’s will have experience of them struggling to remember new information or repeating what they’ve just said. But patients will also be able to recall memories from the past, song lyrics or dance moves learned many decades earlier.’

For most sufferers, dementia progresses slowly over several years. Typically it causes problems with short-term memory, while longer-term memories remain intact, at least during the earlier stages.

‘You might expect events that happened long ago to be forgotten first, while things that happened more recently are easier to recall,’ Prof Crutch says. But in fact, if anything, it’s quite the opposite. Older memories which have been recalled often, especially ones with a strong emotional element, get stored in a different part of the brain to newer information.

The process is akin to archiving documents on your computer, according to Jorg Fachner, professor of music, health and the brain at Anglia Ruskin University. The information remains even when damage makes accessing it harder.

We tend to make strong emotional connections between certain pieces of music and experiences we’ve had, particularly between the ages of ten and 30, adds Prof Crutch.

And this is why, when prompted by a certain song, people with dementia will recall vivid details about, say, going to a concert in their youth – and that may involve not just the song itself, but who they were with, what they wore and what else happened around that time. These emotional memories are stored in the same areas of the brain that are responsible for ‘remembering’ basic motor tasks, which we do almost unconsciously, such as brushing our teeth, driving or riding a bike. Hearing music with a strong emotional connection seems to act as a key to unlock the archived memories, and bring at least some of them back. For this reason, music therapy for people with dementia uses songs from an individual’s younger days.

Studies have shown that it is not just music in general which can have a positive effect in dementia patients, it has to be music which means something to the individual. ‘People today with early dementia may be in their late 60s and early 70s. They don’t want to hear Vera Lynn because they grew up listening to The Who,’ Prof Crutch says. ‘Personal taste is critical. Even twins may later in life respond differently to one or more pieces of music based on their experiences and what it means to them.’ 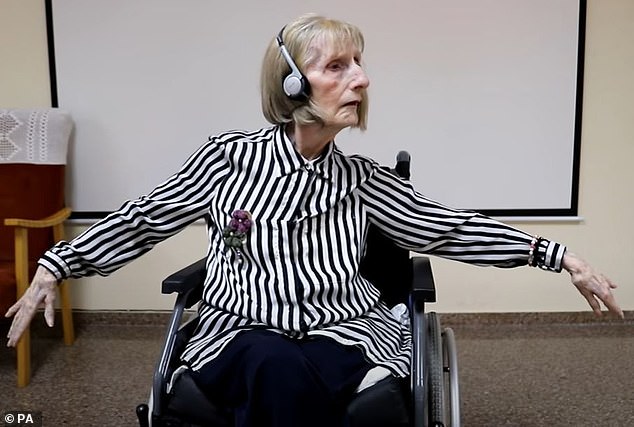 Ms Gonzalez, pictured, reportedly died in 2019, but the recording of her reaction has been shared widely on the internet this week

So why does music, more so than other stimuli, have this effect on the brain? It’s because of the very basic way we develop communication skills as babies, according to Professor Helen Odell-Miller, director of the Cambridge Institute for Music Therapy Research at Anglia Ruskin University. Sound and movement are closely connected in the developing brain. Babies are born with the ability to move, to listen and to make sound, and they use these functions to mimic and communicate with their parents, Prof Odell-Miller explains. ‘Rhythm, pitch and tempo – all of the qualities of music and speech – are hard-wired into our neural pathways as babies.

‘In later life, if dementia develops, other brain functions might decline, but connections between movement or other memories and music often remain.’

Prof Crutch adds: ‘The brain can’t help but be stimulated by music. It’s like an endlessly fascinating object – there’s information about tone, volume, different timbres of voices and instruments, and we hear music like shapes, with tones which rise and fall. It’s highly evocative. One famous neuroscientist refers to music as “auditory cheesecake” – there are so many ingredients in it which interest different systems that it’s hardly surprising it has such a motivational effect on us.’

Researchers at the Max Planck Institute in Leipzig, Germany, carried out the most convincing study to date, which illustrates why those with Alzheimer’s respond so well to music.

The academics performed MRI brain scans on young, healthy volunteers while playing them music which was either familiar to them or had not been heard before, to see which part of their brains were engaged.

They compared these scans with data from Alzheimer’s patients, which revealed which parts of the brain were least damaged by the disease.

The study found the areas generally spared from the worst damage were the same as those found to be involved in musical memory and movement.

While those areas are not completely invulnerable to the disease, they are generally affected only much later.

In another study, at the University of Utah, researchers found that listening to favourite pieces of music triggered surges of activity in several parts of the brain, including social and sensory hubs which had previously been far less active. 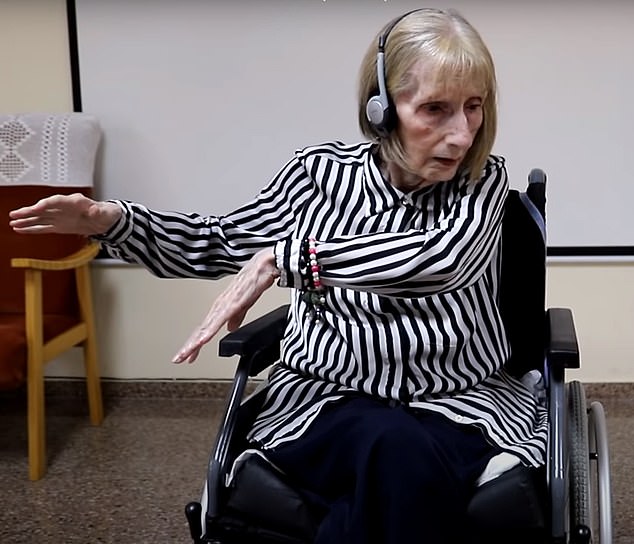 Hollywood A-listers Sir Ian McKellen, Jennifer Garner and Antonio Banderas have all praised the video, remarking how music can help those suffering with dementia

The long-term effects of music and therapy remain uncertain. But there is some evidence from studies on twins that those who play instruments are less likely to develop dementia later on, so music may even help delay its symptoms.

As seen in the case of Marta Cinta, and Paul Harvey, the effect is not permanent – indeed, when the music stops, so does the magic. Nor does it work for everyone. Prof Fachner says: ‘It’s possible to rewire the brain’s connectivity to some degree, but it’s a fight against the deterioration process.’

What it does offer, unarguably, to both those with dementia and their families, is the opportunity for precious moments of joy.

END_OF_DOCUMENT_TOKEN_TO_BE_REPLACED 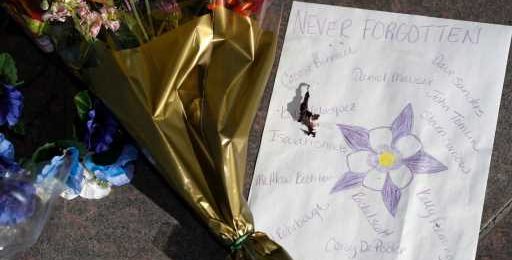 END_OF_DOCUMENT_TOKEN_TO_BE_REPLACED

Too cute! Karlie Kloss shared a photo of her new baby with her husband, Joshua Kushner, and revealed the newborn’s […]

END_OF_DOCUMENT_TOKEN_TO_BE_REPLACED

As the speed of covid vaccinations picks up, so do the reports of doses going to waste. And it’s more […]