Matt Baker: Presenter’s ‘absolute nightmare’ health – ‘it was never part of my plan’ 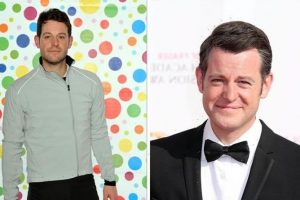 The star, who is set to take part in The Great Rickshaw Challenge for BBCs Children in Need will see him tackle a relay-style ride in five chapters, travelling through five inspirational young people’s hometowns. The one-hour special documentary airing tonight (Wednesday November, 9) will not only share the team’s stories, but celebrate the return of Children in Need – a charity that aims to raise money to help change young lives. One thing that Matt has struggled with since he was young is dyslexia, which at one point put his television career into jeopardy.

Chatting on Times Radio, Matt discussed the challenges that he has overcome throughout his career, and what led him to becoming so successful in TV.

Host Mariella Frostrup said: “You talk about how you live in a practical world, I know as a presenter you have to sit and read autocue when you’re sitting doing The One Show – it’s a live programme.

“So first of all, as a severe dyslexic that must present challenges, but secondly, how did you have the patience to put up with all the nonsense around making television programmes.”

Humoured by the conversation, Matt replied: “I mean, I never wanted to be a presenter.

He went on: “I mean that’s the flip side is that when you’re learning to read as a six-year-old, your brain is learning incredibly hard to be able to pick out these words and to say what you think it says.

“That pressure that you’re under while you’re doing it is another thing that has set me up in good stead because I’m used to working in a very high pressure situation simply by being asked to read.”

Although accidentally falling into the world of television, Matt’s work ethic is second to none. He confessed: “I’m a try hard because I’ve had to try hard if you know what I mean, nothing comes easy in the world of text for a dyslexic person, and that has been my outlook.”

The star, who grew up around animals on his parents 100-acre sheep farm, admitted that when growing up, he always noticed his “odd” relationship with words.

Matt continued to provide insight into what having dyslexia is like for individuals, both young and old: “When I was younger, I didn’t spend hours with my head in a book because it wasn’t relaxing for me.

“I’ll always have a very odd relationship with words because I so want to be able to read brilliantly, and I don’t want to feel the way that I do when I look at a page and see all these words that are like swimming around.

In the past, Matt has also revealed how his wife Nicola Mooney helps him when reading scripts for TV roles.

Getting help from the self-confessed bookwork, who Matt says has “always got a book in her hand,” is “incredibly helpful,” says Matt.

The NHS explains that dyslexia is a common learning difficulty that causes problems with reading, writing and spelling.

Said to affect around one in 10 people in the UK, for some it can have drastic effects on their daily lives.

Dyslexia is usually first diagnosed when children are at school, as this is where they focus more on reading and writing. A person with dyslexia may:

Despite the challenges, many people with dyslexia see it as a huge positive. In fact Dyslexia Help – a website supporting those with dyslexia explains that individuals with dyslexia are usually extremely successful entrepreneurs, thinkers, and celebrities.

Furthermore, dyslexic scientist Christopher Tonkin described to me his sense of this as a sensitivity to “things out of place.” This sensitivity towards casual perception has allowed many individuals to pursue successful careers in the scientific and medicine industries.