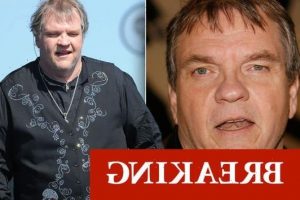 Meat Loaf might be best known for his rock ballads, including I’d Do Anything for Love, and anthems like Bat out of Hell. The Broadway star, actor and rock legend had a prolific career, spanning six decades and selling over 100 million albums, but in his later years many were concerned about the star’s health following a spate of worrying onstage incidents.

Meat Loaf, real name Marvin Lee Aday, has died at the age of 74, his family have confirmed in a statement sharing the sad news to Facebook.

A post shared to Meat Loaf’s Facebook page said: “Our hearts are broken to announce that the incomparable Meat Loaf passed away tonight with his wife Deborah by his side.

“Daughters Pearl and Amanda and close friends have been with him throughout the last 24 hours.

“We know how much he meant to so many of you and we truly appreciate all of the love and support as we move through this time of grief in losing such an inspiring artist and beautiful man.

“From his heart to your souls…don’t ever stop rocking!”

Meat Loaf’s family have not confirmed his cause of death, but the rocker’s health had been the subject of concern in the last years of his career.

Despite his energetic stage performances and powerful voice, the singer suffered from asthma.

In June 2016, the US singer collapsed on stage at a gig in Alberta, Canada, prompting fears about the performer’s health.

Meat Loaf fell to the floor during his performance of I’d Do Anything For Love.

The cause of his collapse was reported to be dehydration, but a few months later in November 2016 the singer revealed he had emergency back surgery.

Speaking to Press Association before the Q awards, he said: “four weeks ago I had spinal fusion.

“There was a cyst which was pinching nerves so I had emergency back surgery.”

This wasn’t the first time Meat Loaf had collapsed mid-performance: he previously collapsed during a performance in Pittsburgh in 2011, and in London in 2003.

Meat Loaf broke his collarbone in 2019 by falling off a stage at the Texas Frightmare horror convention.

The singer’s accident-prone stage behaviour stems all the way back to the 1970s, when in 1978 he broke his leg by jumping off stage in Ottawa, Canada.

Ever the professional, rather than cutting his tour short Meat Loaf opted to perform the rest of his shows from his wheelchair.

Despite his stage name, Meat Loaf followed a vegetarian diet from 1981 to 1992, and in January 2020 announced he would be following Veganuary.