Home » Health News » Monkeypox symptoms: The sign that appears inside the mouth in 70% of cases – CDC report

Monkeypox symptoms: The sign that appears inside the mouth in 70% of cases – CDC report 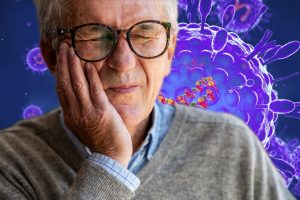 The latest outbreak is by far the largest seen outside Western Africa to date, stirring concerns it could grow to endemic proportions. Yesterday Britain logged another 36 cases of monkeypox, meaning the outbreak has tripled in size in just a few days. Health bosses have described the rise as S, but have yet to confirm the disease has spread. The majority of cases present with a rash on the soles of their hands and feet. In some cases, the rash may spread to the mucous membranes inside the eyes and mouth, according to the CDC.

According to the health body, human transmission is thought to occur primarily through large respiratory droplets.

Because droplets cannot travel more than a few feet, prolonged face-to-face contact is required for transmission.

The CDC explains: “The skin eruption usually begins within one to three days of the appearance of fever.

As the rash spreads to the oral mucous membrane, it may become apparent on the layer of skin inside the mouth, including the cheeks and lips.

“The rash evolves sequentially from macules to papules, vesicles, pustules, and crusts which dry up and fall off,” notes the CDC.

The number of lesions can vary from a few to several thousand, and in severe cases, they can coalesce until large sections of skin slough off.

Doctor Clare Morrison, the clinical expert at MedExpress, told Express.co.uk: “The initial symptoms of monkeypox resemble symptoms typical of any viral infection. These include fever, headache, muscle and backaches, swollen glands, and fatigue, so it may be difficult to detect early.”

In early research, scientists have also found that an infection from monkeypox could affect the lung during infection.

The findings, published in the journal of Molecular and Cellular Proteomics, revealed that the infection could increase the production of protections involved in inflammation.

The monkeypox virus also appeared to decrease the production of proteins that keep lung tissue intact and lubricated.

“Going into this study, we thought monkeypox caused disease primarily by inducing inflammation in the lung, and that leads to pneumonia,” said Joseph Brown, lead author and systems biologist at the Department of Energy’s Pacific Northwest National Laboratory.

“We were surprised to see how badly the virus wrecked the structural integrity of the lungs,” he added.

However, Doctor Morrisson reassures symptoms are rarely severe, and usually clear up within two to four weeks.

She added: “It’s more likely to be dangerous in those with a weaker immune system, children, and pregnant women from whom it can spread to the foetus.”

The UKHSA has pointed out that the most recent cases are predominantly in gay men, bisexual men, and men who have sex with men.

It remains unclear, however, whether the virus is being spread through sexual contact, or whether it is airborne.

“Close contacts of those infected, should self-solace for 21 days if you think you may have monkeypox, do seek advice from a doctor as soon as possible,” noted Doctor Morrisson.

Some healthcare workers in Britain have been offered a smallpox jab, which is believed to confer some protection against monkeypox, according to the UK Health Security Agency.