Mother whose stomach exploded is having rare five-organ transplant 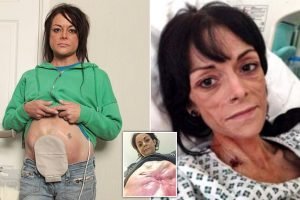 A mother whose insides began to burst through her caesarean section scar is to undergo a rare five-organ transplant.

Michelle Oddy, 43, gave birth to her daughter, Kiera, via C-section in 2004, ten years before her ordeal began.

Mrs Oddy, who has suffered from Crohn’s disease since she was 14, woke up one morning to find her insides had pushed out of her scar, causing faeces to leak.

Doctors said it was caused by a fistula – an abnormal channel that passes from one organ to another, or to the outside surface of the body. A fistula can be caused by Crohn’s and other inflammatory bowel diseases.

Mrs Oddy’s fistula was a channel from her bowel to her skin which then broke through the weak scar tissue of her C-section scar.

Mrs Oddy now has multiple organ failure, which doctors believe has been caused by various operations. She also has a colostomy bag and relies on feeding tubes.

Surgeons have hope to get her an operation in the next two months to replace her liver, pancreas, small and large intestines and half of a stomach, with all the organs coming from one donor.

However, they have warned the hairdresser, from Ilkeston, Derbyshire, that there is a 35 per cent chance she will die during the 20-hour procedure. 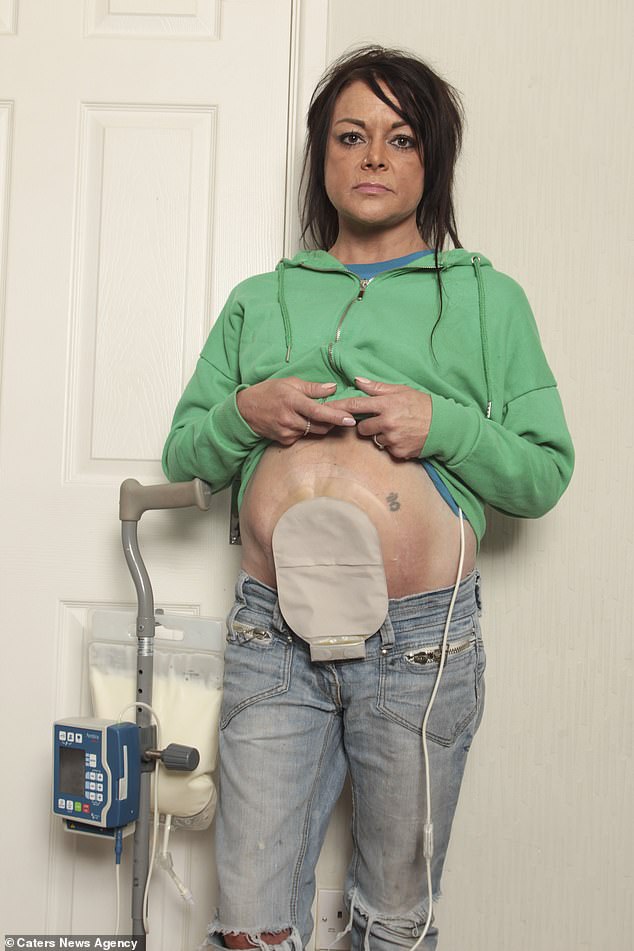 Michelle Oddy, 43, of Ilkeston, Derbyshire, is having a rare five-organ transplant after findings her insides bursting out of her caesarean section scar. Pictured at home with her colostomy bag and feeding machine 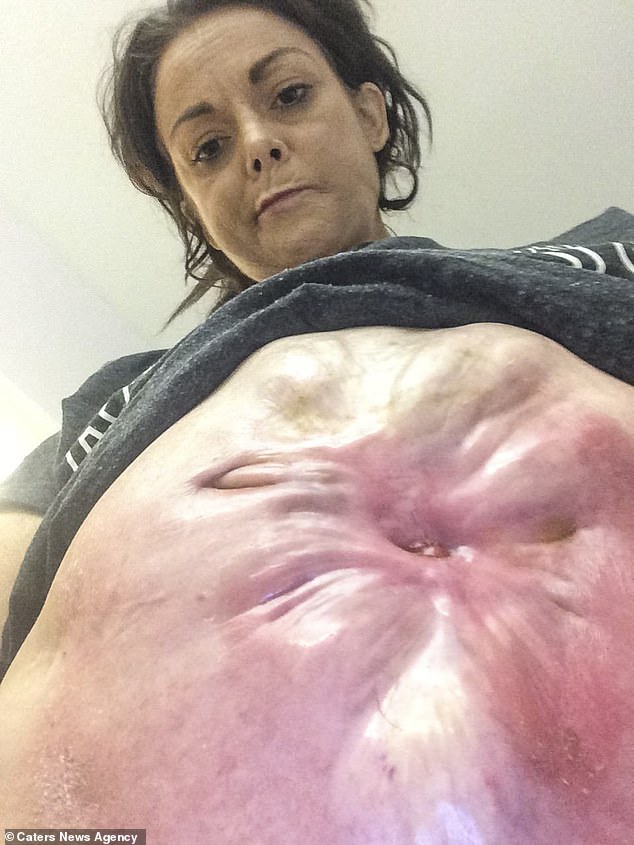 Mrs Oddy woke up one morning to find her insides bursting out of her scar which had been caused by a complication of her Crohn’s disease. Pictured, her stomach 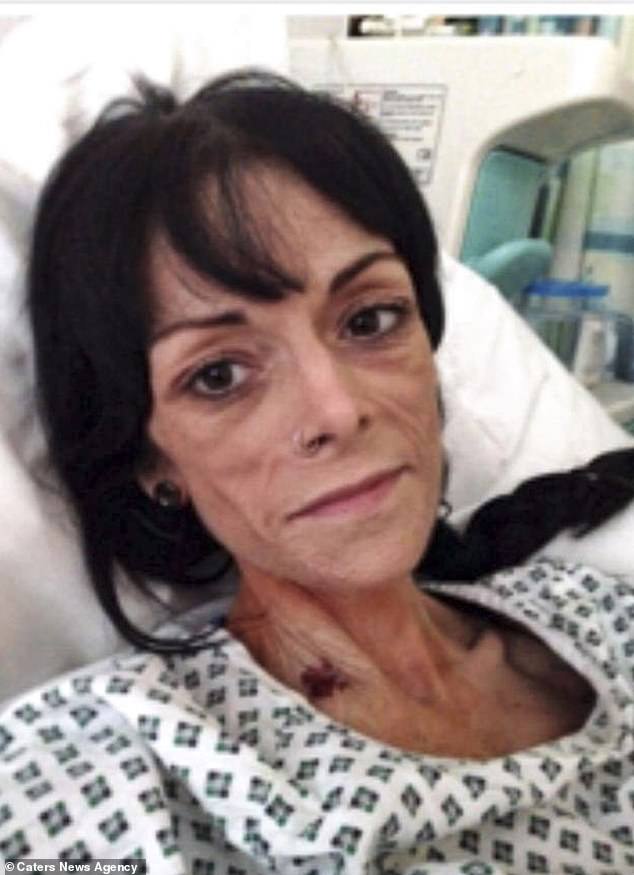 With multiple organ failure due to so many operations, a colostomy bag and feeding tubes constantly becoming infected, doctors are running out of options to keep Mrs Oddy going. Pictured when she dropped to four stone in weight in 2015

Mrs Oddy said: ‘At the end of the day it’s only a matter of time before I could pass away. It just gets worse.

‘My quality of life is so bad that I’m willing to gamble – half of my insides are being replaced.

‘I want this gaping hole in my stomach to go, I can’t do anything, it has completely taken over my life.’

Ms Oddy had endured seven operations to remove parts of her bowel due to complications with her Crohn’s.

CAN INTERNAL ORGANS POP OUT OF A C-SECTION SCAR?

Mike Savvas, consultant gynaecologist at King Edward VII’s Hospital and King’s College Hospital, London, said that while such incidents are rare, ‘they can happen’.

He told MailOnline in 2015: ‘With any time of abdominal incision, this can happen – it’s not unheard of.

‘However it’s particularly rare with horizontal incisions, as made during C-sections.

‘If there is a bit of a gape (of the wound) then a bit of the bowel bulges out.

‘It’s not just a case of the wound popping open and everything spilling out.’

Another issue is that while new mothers have traditionally been in hospital for five days, shorter hospital stays mean women are increasingly discharged sooner.

‘If such an incident happens while a woman is on the ward, it is a lot quicker and easier – and less alarming – to deal with than at home,’ he explained.

In 2014, she woke up one morning and looked down to see a hole in her stomach ten years after the birth of her daughter. She did not say which month it happened in.

She said: ‘The insides of my stomach were just falling out, there was blood all over me.’ Mrs Oddy added that it was also leaking faeces.

Fistulas occur in one in three people with Crohn’s at some point in their life, according to Crohn’s and Colitis UK.

The abnormal passage may connect two parts of the bowel to each other, or the bowel to the vagina, bladder, or skin, most commonly around the anus.

Mrs Oddy had a gastrointestinal fistula, a passageway from a remaining part of her bowel to the outside of her stomach, which then broke through the skin where she had previously been opened for the C-section.

A gastrointestinal fistula causes fluids and acid to seep through the lining of the stomach or intestines which can cause infection to other organs and sepsis.

Food also struggles to move properly through the body.

It is not clear how Mrs Oddy’s condition was treated, however she still needs the hole dressed daily by nurses.

During this time, Mrs Oddy started to dramatically lose weight and gradually dropped to just four stone in 2015, which contributed to her organs struggling.

She said: ‘It’s hard to explain, but because I have had so many operations on my bowels, they stopped working so everything just clogs up in my body, and it has to leave somewhere.

‘They told me my organs had packed up and I only had a few days of life left.’

Treated just in time, Mrs Oddy was given a TPN, or liquid feed, that was set up at her home after spending four weeks in hospital. 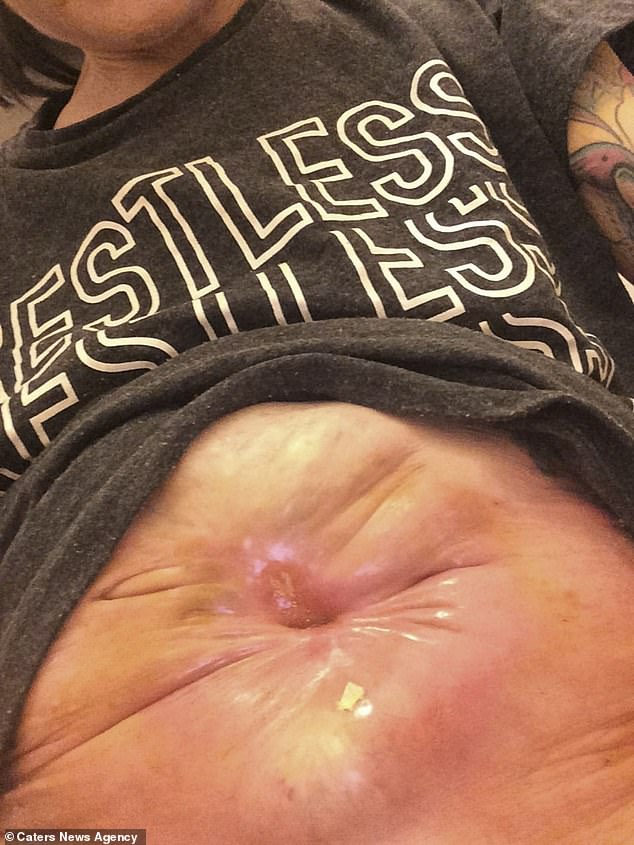 Mrs Oddy said: ‘The insides of my stomach were just falling out, there was blood all over me’. Pictured, Mrs Oddy’s hole in her stomach 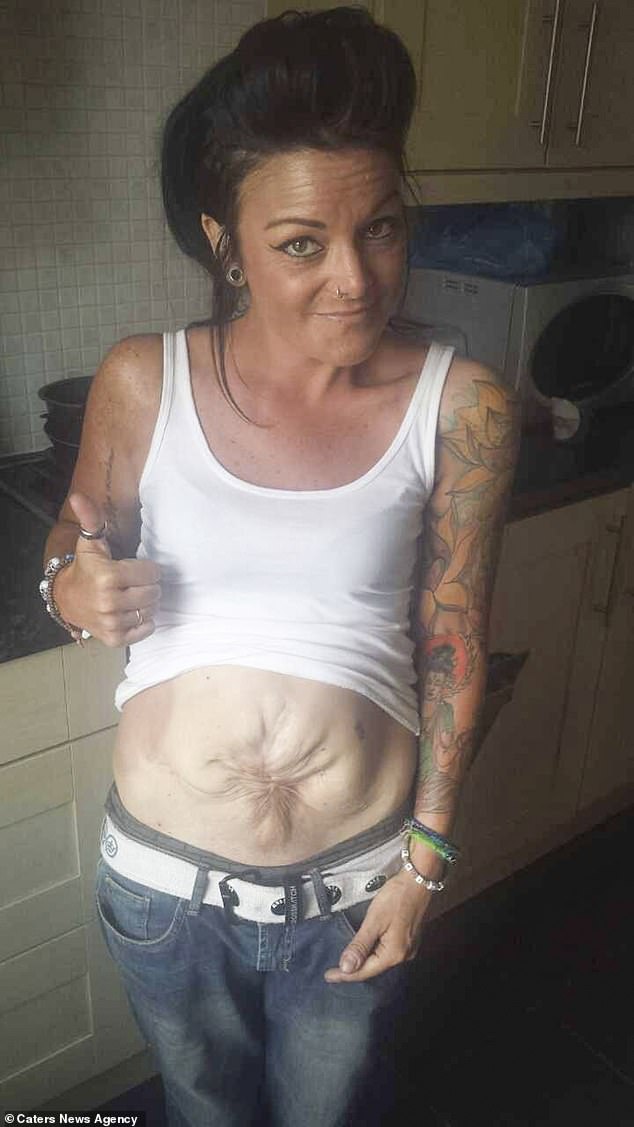 Mrs Oddy developed a fistula, which is an abnormal channel that passes from one organ to another, or to the outside surface of the body. It’s common in people with Crohn’s 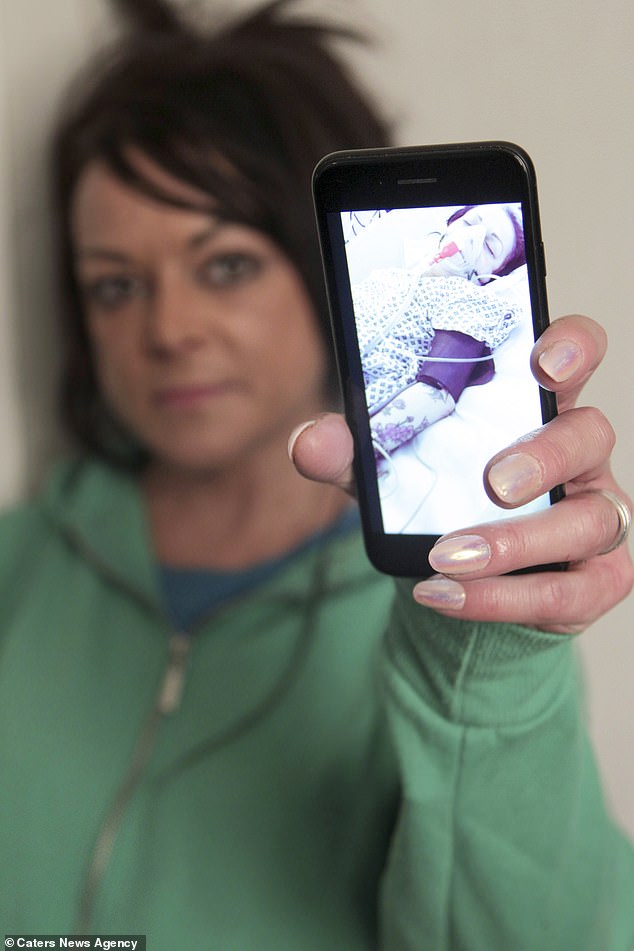 Mrs Oddy had ‘one of the worst days of my life’ last year when she fell ill and was rushed to hospital. She had gone into septic shock from an infection in her feeding tube

Six nights a week, a nurse visits Mrs Oddy home to administer the liquid feed, which gives her all the vital nutrients.

Mrs Oddy said: ‘My weight started to get better but I still have a nurse coming to my house to feed me every day, it’s just insane, I can’t keep living like this.

‘My organs have stopped working, I still have a hole in my stomach and a permanent colostomy bag.’

Mrs Oddy had ‘one of the worst days of my life’ last year when she fell ill and was rushed to hospital.

She said: ‘After being there for a couple of hours, my wife, Laura, walked in and found me unresponsive and staring into space.

‘The next thing I remember was the room filling up with doctors. I had gone into septic shock due to infections caused by the TPN and my veins giving in after being pumped with liquid nutrients for the last four years.

‘Once they stabilised me, they told Laura to come in so we could say our goodbyes because I would not make it to the next day.

‘Saying goodbye to my daughter, and Laura, was one of the hardest moments I have ever faced.

‘Somehow, two hours later I made a full recovery and I decided to marry Laura six weeks later.’ 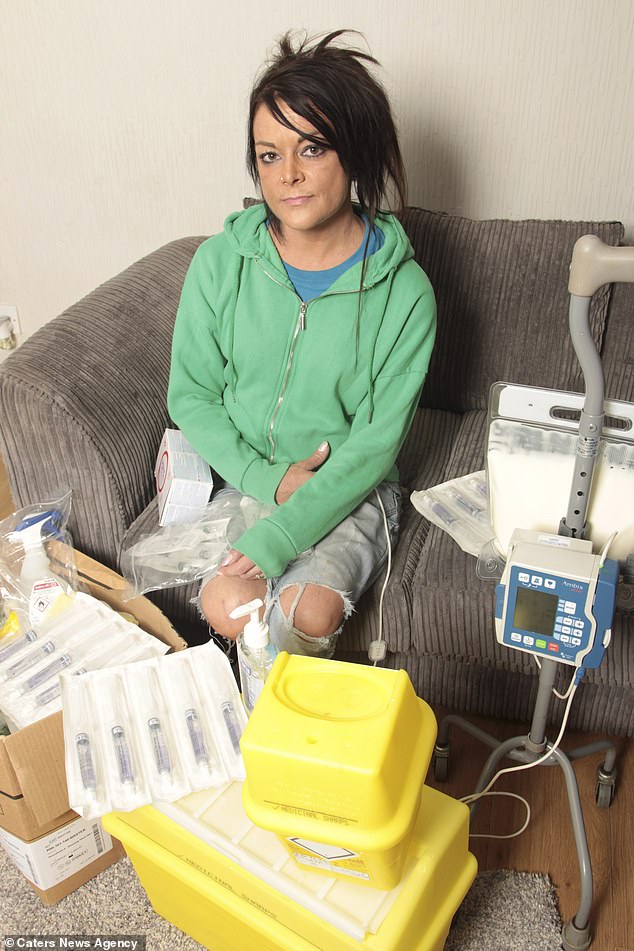 Six nights a week, a nurse visits Mrs Oddy’s home to administer the liquid feed, which sends vital nutrients direct to her major arteries. Pictured at home with a gastrostomy feeding machine and other medical equipment 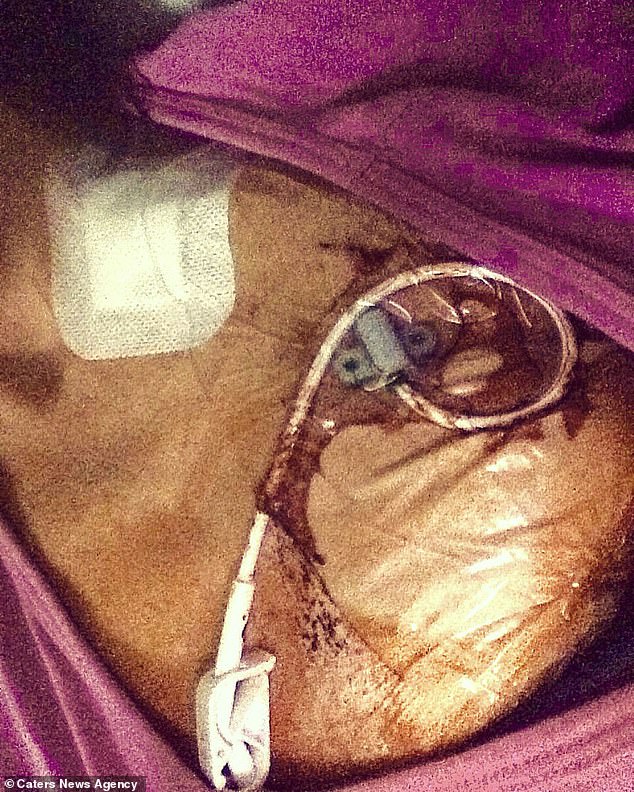 After her weight plummeted in 2015, Mrs Oddy was given a TPN, or liquid feed, that was set up at her home after spending four weeks in Hospital 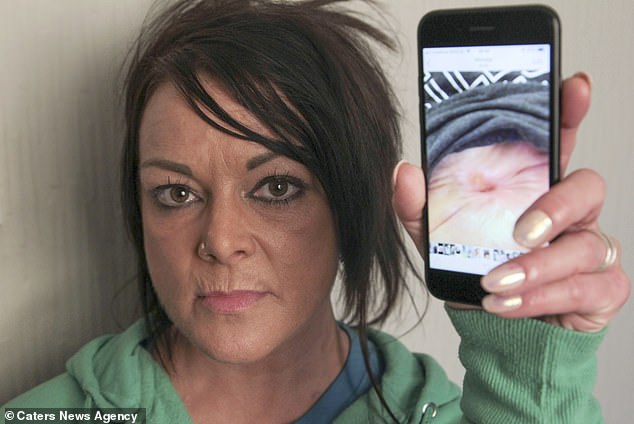 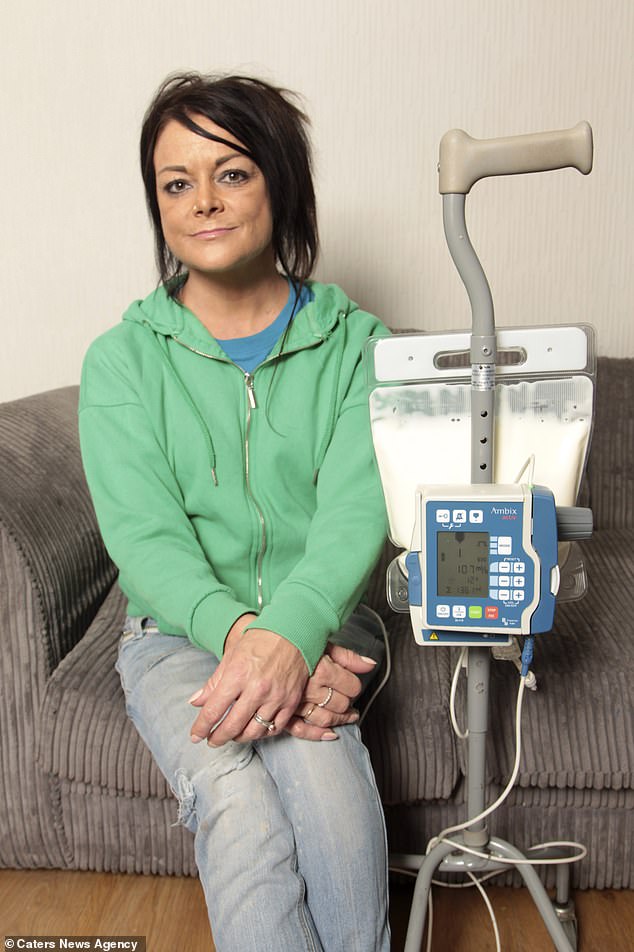 The liver, pancreas, small intestine, large intestine and half of the stomach are all due to be replaced thanks to one donor

WHAT IS A FISTULA?

A fistula is an abnormal connection between an organ and another structure. Fistulas develop when an organ becomes inflamed or injured.

They are a very common complication of inflammatory bowel disease (IBD), occurring more frequently in Crohn’s disease than ulcerative colitis.

About 35 per cent of people with Crohn’s disease have at least one fistula.

What are the symptoms?

Symptoms of a fistula depend on where the connection has formed. Fluid or waste may leak continually from the anus or vagina or seep through the wall of the abdomen.

If you have a perianal fistula, you may have ongoing rectal pain or swelling.

A fistula between the intestine and bladder can cause a urinary tract infection that keeps returning.

Fistulas between two loops of the intestine may not cause any symptoms.

What is the treatment?

Fistulas can be very complicated to treat. Surgery can be risky. Most health care providers will try to treat a perianal fistula with medication first.

However, many patients with perianal fistulas eventually do need surgery.

Now, consultants have said that her artificial feed is failing.

They have put her forward to have five of her organs replaced in hope of giving her a better quality of life.

She needs all of the organs to be from one donor to minimise the risk of rejection. The operation will also need a team of various specialist surgeons to come together.

Mrs Oddy said: ‘The idea that I have a 35 per cent chance of never waking up is terrifying.

‘What I always remember is that there’s also a 65 per cent chance that I’ll wake up better, I’ll be able to take my daughter on holiday and we’ll be able to swim together.

‘I want my quality of life back; I want to enjoy days out with my family just like everyone else.

‘The little things have become so difficult, I just want to enjoy a meal, or go out and not have to worry about my stomach opening up and spilling out.

‘Even going for something as normal as a picnic is hard – everyone is sitting around eating lovely food and I can’t touch it. I always have to be on guard.’

‘We have carried out about 100 such procedures and internationally there have been around 1,500 bowel containing transplants in adults since 1992.

‘In the UK, Addenbrooke’s Hospital is the only centre that provides adult multivisceral transplants including a liver.’

Mrs Oddy said: ‘Without my wife and daughter, who have been amazing throughout this whole process I would have already given up.

‘I’m risking this for them, for better or for worse.’

What is Crohn’s disease?

Crohn’s disease is a long-term condition that causes inflammation of the lining of the digestive system.

Inflammation most commonly occurs in the last section of the small or large intestine but it can affect any part of the digestive system.

Common symptoms can include:

Remission occurs when people with the disease go long periods of time without symptoms however these periods can be followed by flare ups of symptoms.

The exact cause of Crohn’s disease is unknown. However, research suggests a combination of factors may be responsible. These include:

environmental factors – Crohn’s disease is most common in westernised countries such as the UK, and least common in poorer parts of the world such as Africa, which suggests the environment has a part to play