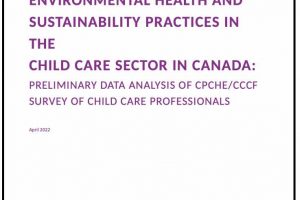 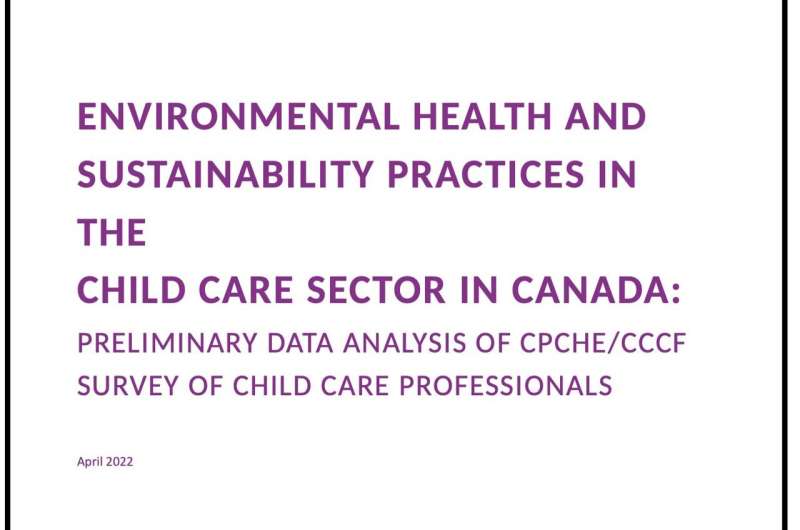 Nearly half of some 2,000 professionals in child care programs across Canada report unhealthy conditions for children, according to survey data released on national Healthy Environments for Learning Day (HELD).

Educators, support staff, administrators and others in oversight roles replied to the survey on a wide range of environmental health and sustainability topics, conducted in March and April by the Canadian Partnership for Children’s Health and Environment (CPCHE) and the Canadian Child Care Federation (CCCF), in collaboration with University of Ottawa researchers.

More than two-thirds of respondents expressed concern about risks to children’s health and well-being posed by air pollution (indoor 64%; outdoor 69%), toxic chemicals in products (69%), a lack of access to nature (68%), and climate change (68%).

More than half (53%) cited lack of funding and 45% cited lack of support from government as barriers to action to improve environmental health protection and sustainability in their program.

The findings suggest that while child care professionals believe it is important for program settings to become healthier and more ecologically sustainable, the sector lacks the resources and supports to make needed changes.

Against this backdrop, and to mark Healthy Environments for Learning Day, CPCHE, CCCF and more than 40 organizations across Canada jointly released a Vision for Healthy and Sustainable Child Care Environments in Canada, setting out 10 key areas for action.

Respondents to the national survey were asked about environmental health conditions in their child care settings. Among the findings:

“These findings are concerning. A striking proportion of respondents are telling us about child care spaces with mould, structural disrepair, peeling paint, pest infestations, routine use of pesticides, and noticeable air contaminants from nearby traffic or industry,” says Erica Phipps, CPCHE’s Executive Director. “As a society, we need to do better than this. If we are serious about ensuring that all children in Canada get the best possible start towards lifelong health and success in learning, we need to invest in the child care settings where many spend significant portions of their formative early years.”

“An ever-growing body of scientific research tells us that ongoing exposure to even low levels of some toxicants can permanently alter the developing brains and bodies of children,” Phipps adds.

While 73% of respondents say there is top-level support (e.g., from the child care administrator/board/owner), interest among staff (71%), and support from families (72%) to improve environmental health and sustainability in their child care programs, action is so far limited. When queried on a host of available measures to reduce children’s exposures to toxic chemicals and pollution, conserve energy or otherwise improve the program’s ecological sustainability, the majority of respondents reported that actions were only partially implemented or not yet underway.

Says Don Giesbrecht, CEO of the Canadian Child Care Federation: “This survey taps into the real-life experiences and knowledge of people working day-in and day-out in child care programs across Canada. We need to listen to their concerns and respond to these environmental health issues. It clearly shows why the Canada-wide child care plan is so necessary. Moving forward, more investment at the provincial/territorial and federal government levels are needed to create child care spaces that actively promote children’s health and well-being.”

A gap between commitment and capacity

“This survey speaks to the gap between commitment and capacity,” he adds. “People in our sector believe health and environment are important and want to see these changes. We just need to get the right policies and supports in place to enable it to happen.”

Asked about a range of progressive measures to create healthier and more sustainable child care settings, respondents reported that their programs are currently taking action, including:

Other measures, such as reducing vehicle idling or taking action to reduce carbon emissions, saw much lower levels of reported action.

Across all of the potential measures, at least 1 in 10 respondents, and sometimes up to 3 in 10, reported that they are not yet doing an action but are interested. For example, 25% reported interest but not yet action to conserve energy. Similarly, 22% reported not reducing the use of plastics, but expressed interest in doing so.

The survey findings suggest that climate change is the topic with the largest gap between level of concern and action. Only one in five respondents (20%) reported their child care program is taking action to reduce carbon emissions/address climate change, the lowest response rate across all measures surveyed. Yet, more than two-thirds (68%) of respondents indicated that they are very or somewhat concerned about the impact of climate change on children’s current and future health and well-being.

Surprisingly, fewer than half (46%) of respondents said that their child care program had taken measures to increase ventilation or otherwise improve indoor air quality in response to the COVID pandemic. Among the respondents who reported measures had been taken, opening windows more frequently was the most commonly cited action (67%), followed by use of portable (e.g., HEPA) air cleaning devices (53%). As a concerning indicator that information on safe and effective measures is not reaching practitioners, nearly one in twelve respondents (7%) reported the use of ozone air purifiers, devices for which Health Canada issued an interim order in 2021 to avoid use due to health risks. Similarly, 12% of respondents reported use of “fogging” devices that propel disinfecting/sanitizing chemicals into the air, a concerning practice that can increase inhalation of such chemicals by children and staff, and that is not known to be an effective means of reducing COVID transmission.

Not all child care settings are equal

Child care professionals who indicated that the majority of children in their care are living in low-income circumstances were more likely to report unhealthy conditions in their programs. Respondents working in programs in which a majority of children are on low income were more likely to report structural disrepair, lead in water supply pipes, recent insect and/or rodent infestation, mould or mouldy smell, excessive moisture, peeling paint, noticeable air pollution and/or excessive noise from a nearby roadway, industrial facility or other source, and the use of artificial air fresheners, among others.

Unregulated/unlicensed status was also significantly correlated with respondent-reported structural disrepair, having windowless rooms where children spend time, recent rodent infestation, routine use of pesticides indoors, use of cleaning/sanitizing/disinfecting chemicals in close proximity to children, and lack of natural vegetation in outdoor play areas.

Conversely, respondents who reported that their child care program has outdoor spaces with natural vegetation were more likely to be working in regulated child care, and in programs serving a low proportion of children who live on low income, are visible minorities or who speak a language other than English or French at home.

Respondents working in regulated child care were more likely to report that their program had taken measures to improve ventilation and air quality in response to the COVID pandemic.

There is ever-increasing scientific evidence that children’s exposures to toxic chemicals and pollutants, prenatally and in childhood, adversely affect their cognitive development, contribute to learning and behavioural challenges, and affect their educational pathways and lifelong health trajectories (Bennett et al, 2016).

In the lead-up to Healthy Environments for Learning Day, CPCHE and CCCF launched an online information hub and checklist offering child care professionals a host of practical tips and supporting information to improve environmental health and ecological sustainability in their programs. Survey findings indicate that such supports are needed: nearly nine out of 10 survey respondents expressed interest in using such a resource; 47% cited the lack of information, guidance and training as a current barrier to action.

Towards a national vision of healthy and sustainable child care environments