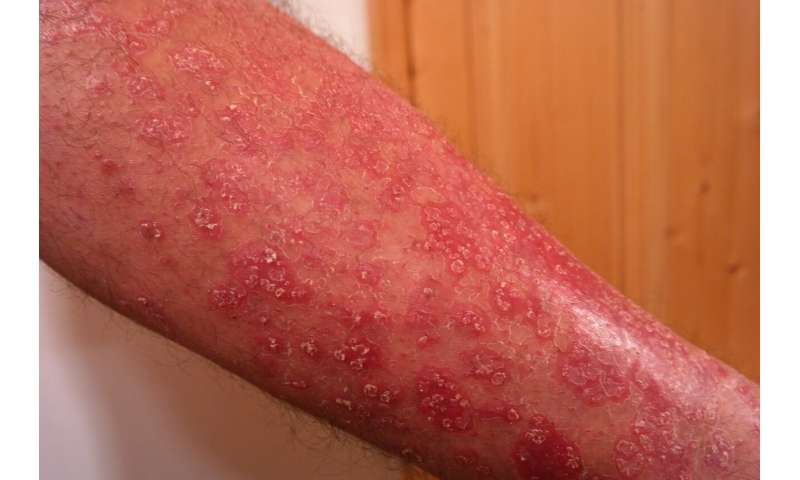 Mount Sinai researchers have pinpointed a single gene biomarker, nitride oxide synthase 2 (NOS2) that can distinguish atopic dermatitis (AD) and psoriasis with 100 percent accuracy using adhesive tape strips, a non-invasive alternative to skin biopsy. The research will be published online today in the Journal of Allergy and Clinical Immunology.

The study was led by Emma Guttman-Yassky, MD, Ph.D., Sol and Clara Kest Professor and Vice Chair of Dermatology at the Icahn School of Medicine at Mount Sinai. It evaluated tape strips obtained from 20 adults with moderate to severe AD, 20 with moderate to severe psoriasis, and 20 healthy individuals. From each subject, 20 tape strips were collected, some from lesions and the rest from clinically unaffected skin. The skin cells collected from the tape strips were subjected to global molecular profiling for identification of disease-related biomarkers.

“In the past, skin tissue biopsies have always been considered the gold standard for distinguishing between inflammatory skin diseases, but they can cause pain, scarring, and increased risk of infection,” said Dr. Guttman-Yassky, whose past revolutionary research on AD focused on the mechanism underlying the disease and promoted development of targeted therapeutics for it. “This study shows that using adhesive tape strips may provide a minimally invasive alternative to skin biopsies for monitoring biomarkers of patients with these particular skin diseases and beyond.”

The researchers also captured other genes related to immune and epidermal barrier function that were dysregulated in AD and/or psoriasis, and that distinguished each disease from the other. For example, tape strips from AD patients strongly expressed cell markers related to T-helper 2 (Th2) immune response, which is characteristic to AD, while psoriasis patients displayed much higher levels of Th1 and Th17 cytokines, which are characteristic to psoriasis.

Dr. Guttman-Yassky added that the molecular phenotypes described in the study were notably in accord with previous reports from skin biopsy studies and with the current mechanistic understanding of both diseases.

END_OF_DOCUMENT_TOKEN_TO_BE_REPLACED

END_OF_DOCUMENT_TOKEN_TO_BE_REPLACED
We and our partners use cookies on this site to improve our service, perform analytics, personalize advertising, measure advertising performance, and remember website preferences.Ok