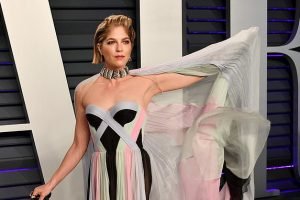 Patients with a rarer form of multiple sclerosis (MS) have brain stem cells that ‘look and act older’, research suggests.

A study found one in five patients with primary progressive MS – where symptoms worsen without episodes of relief – have brain stem cells that appear decades older than a healthy person’s.

These ‘aged’ stem cells trigger the activation of genes that may stop the patient’s nerves from being protected against the condition.

But the researchers found blocking a particular protein, known as HMGB1, protects these cells.

MS is an autoimmune condition that occurs when the body mistakenly attacks the protective layer that surrounds nerve cells, causing messages between the brain and the body to go into disarray. 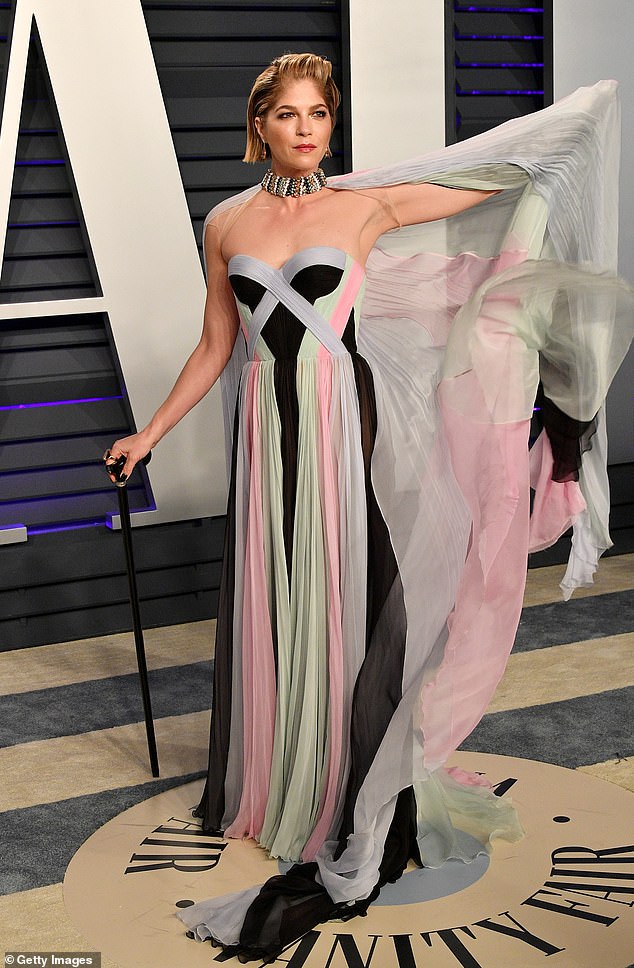 Legally Blonde actress Selma Blair announced in October last year she had been diagnosed with multiple sclerosis in August. She is pictured on the Vanity Fair Oscar party red carpet last month in her first public appearance since her diagnosis

The researchers hope knowing how nerve cells can be protected will finally enable them to cure the ‘devastating disease’.

MS hit the headlines last October when the Legally Blonde actress Selma Blair went public about her diagnosis after years of ‘self medicating’ to cope with her daily pain.

The research was carried out by the University of Connecticut and led by neuroscientist Dr Stephen Crocker.

MS occurs when a patient’s immune system attacks the myelin sheath in their brain and spinal cord.

WHAT IS MULTIPLE SCLEROSIS?

Multiple sclerosis (known as MS) is a condition in which the immune system attacks the body and causes nerve damage to the brain and spinal cord.

It is an incurable, lifelong condition. Symptoms can be mild in some, and in others more extreme causing severe disability.

It is more than twice as common in women as it is in men. A person is usually diagnosed in their 20s and 30s.

The condition is more commonly diagnosed in people of European ancestry.

The cause isn’t clear. There may be genes associated with it, but it is not directly hereditary. Smoking and low vitamin D levels are also linked to MS.

The majority of sufferers will have episodes of symptoms which go away and come back, while some have ones which get gradually worse over time.

Symptoms can be managed with medication and therapy.

The condition shortens the average life expectancy by around five to 10 years.

Myelin sheath is fatty tissue that surrounds the nerves and helps electrical signals travel from the brain to the rest of the body.

These attacks cause the myelin to become inflamed, disrupting the transmission of messages.

The stem cells – which have the unique ability to develop into specialised cell types – were then compared against standard markers.

Results – published in the journal Proceedings of the National Academy of Sciences – revealed patients with primary progressive MS have ‘older’ brain stem cells.

And their oligodendrocytes – the cells that form myelin – express different genes.

Many of these genes are activated by HMGB1, which the patients’ stem cells expressed at high levels.

‘This protein actively blocks the ability of oligodendrocytes to mature,’ Dr Crocker said. ‘We did not know that before.

‘It had been found in lesions, and it has been associated with inflammation, but it was thought to be just exciting the immune system.

‘Now we can see if we block that protein, we dramatically improve the oligodendrocyte’s growth.’

‘And regenerating myelin is a major need that current therapeutics have not met.

‘We are excited the study of human stem cells in a dish led to the discovery of a new disease mechanism that could be targeted in much-needed therapeutics for progressive MS patients.’

In a second part of the experiment, the researchers discovered treating the stem cells with the immune-suppressing drug rapamycin helped them develop normally.

Rapamycin has previously been found to be ineffective in relapsing remitting MS, however, the researchers are optimistic the drug may benefit progressive forms of the disease.

Study author George Kuchel, director of the University of Connecticut Health’s Center on Aging, added: ‘Recent studies have shown drugs designed to target ageing processes may slow the onset and progression of many different chronic diseases.

‘[These include] cancer, atherosclerosis, stroke and Alzheimer’s disease, for which ageing is a major risk factor.

‘This work could have a great impact on the clinical treatment of MS since it opens up an entirely new direction to explore as a possible approach to slowing the progression of the disease.’

The next step is to look at the brain stem cells of patients with relapsing remitting MS to determine if, and when, these ageing-associated changes occur, as well as if it can be prevented, delayed or avoided.

‘Knowing this, we now want to know how this process can be targeted to enhance myelin repair in patient.’

END_OF_DOCUMENT_TOKEN_TO_BE_REPLACED

END_OF_DOCUMENT_TOKEN_TO_BE_REPLACED
We and our partners use cookies on this site to improve our service, perform analytics, personalize advertising, measure advertising performance, and remember website preferences.Ok