N.Korea hails progress in fight against drought despite COVID wave 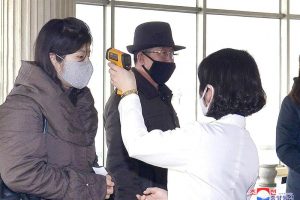 SEOUL (Reuters) -North Korea has made progress in its fight against drought, and rice planting is under way nationwide even as the country ramps up efforts to tame its unprecedented coronavirus wave, state media said on Wednesday.

The reclusive country has been waging a battle against its first-ever COVID-19 outbreak since declaring a state of emergency and imposing a nationwide lockdown last month.

The outbreak triggered concerns over a potential food crisis amid an “all-out fight” against drought, in a country that lacks vaccines and medical supplies and has already been hit by international sanctions over its weapons programmes.

The anti-drought efforts have made progress after the central and local government organs and even art groups mobilised “all capacities and means” to improve irrigation and helped with rice planting, the official KCNA news agency said.

“All farmlands that could suffer drought were located without exception, and farmers were informed of reasonable watering methods according to soil humidity and lighting conditions in order to prevent crop damage,” KCNA said.

Agriculture authorities have come up with “meticulous farming strategies”, including maximising the efficiency of rice planting machines and securing high-quality fertilisers, it added.

Droughts and flooding have long posed seasonal threats to North Korea, and major natural disasters could further hurt its isolated economy. Leader Kim Jong Un has warned of a tense food situation due to the pandemic and last year’s typhoons.

KCNA said 93,180 more people showed fever symptoms as of Tuesday evening, bringing the total to 3,738,810. It did not report any new deaths, and the toll was 70 a day before.

State media has said the COVID wave has shown signs of abating, after the daily numbers of people with fever topped 390,000 about two weeks ago.

North Korea has never confirmed how many people have tested positive for the virus. But experts have said the released figures could be underreported, which could make it difficult to assess the actual scale of the situation.