Home » Health News » Naproxen vs. Ibuprofen: Which is the Better NSAID Pain Reliever?

Naproxen vs. Ibuprofen: Which is the Better NSAID Pain Reliever? 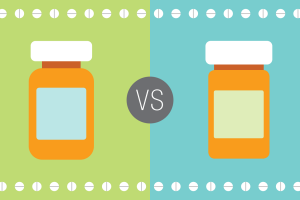 How well does naproxen work for pain?

Compared to newer NSAIDs such as celecoxib (Celebrex)—which belongs to a class of NSAIDs known as COX-2 selective inhibitors—traditional NSAIDs like naproxen work just as well for acute and chronic pain relief. Naproxen works for aches and pains in the joints or muscles, just like other NSAIDs do. No clear winner here.

Is naproxen or ibuprofen better for migraines?

Triptan drugs like sumatriptan (Imitrex) are first-choice medications to treat migraines. But people often turn to NSAID drugs for pain relief here as well. So, which is better? Researchers have actually found that using both a triptan and an NSAID is more effective for treating migraine headaches than using either type of drug alone. The best-studied combination is sumatriptan 100 mg with naproxen 500 mg, so naproxen is a good choice for migraine relief.

Naproxen stays active three to four times as long as ibuprofen. To get full 24-hour coverage, you’d only need to take naproxen twice a day (every 12-17 hours), whereas with ibuprofen, you’d have to take it every 4-6 hours. There’s also an extended-release version of naproxen that lasts a whole day. Convenient.

Which is safer for the gut?

To sum it up, ibuprofen has a slightly lower risk of causing ulcers and gastrointestinal bleeding (bleeding from the esophagus and stomach) compared to naproxen. With any NSAID, take the lowest effective dose and avoid using it long term. And if you have to use an NSAID for more than a few days, add protection for the stomach with a proton-pump inhibitor drug like omeprazole, esomeprazole, or pantoprazole.

Which is safer for the kidneys?

Exposure to any NSAID may cause acute kidney injury—and older age and pre-existing kidney problems are big risk factors. The risk for kidney damage is similar among all NSAIDs, so naproxen is neither better nor worse on the kidney than ibuprofen (Motrin, Advil).

Which is safer for the heart?

It’s a small risk, but all NSAIDS can potentially cause a heart attack or stroke when used at high doses for long periods of time.  For patients with heart disease who will be taking NSAIDs for longer than a month, naproxen at doses up to 500 mg twice daily is recommended over other NSAIDS. Why? In several large studies, taking high-dose naproxen did not result in more cardiovascular problems. In fact, naproxen has the least risk among common NSAIDs.

What’s the difference between prescription and over-the-counter naproxen?

Many folks think of naproxen as a prescription drug, and in fact, at a strength of 500 mg per tablet, naproxen is commonly prescribed by doctors for acute and chronic pain. But what many don’t know is that naproxen is available over the counter as brand-name Aleve, just at a lower dose.

Aleve is a 220 mg tablet you may use every 8-12 hours (maximum total daily dose of 2-3 tablets daily). This differs from prescription-strength naproxen, which is typically dosed at 500 mg two times daily with a maximum total daily dose of 1500 mg (3 tablets). Again, because of potential side effects, you should take the lowest dose of any NSAID that works for you. And if you don’t need naproxen at prescription strength, you might want to give over-the-counter naproxen a try.