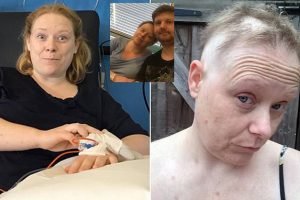 Newlywed, 36, whose itchy skin was dismissed as an infection for two years is battling cancer and desperately raising £120,000 for a drug not available on the NHS

A woman’s who battled an ‘unbearable itch’ for two years actually had cancer and is now desperately raising £120,000 to ‘save her own life’.

Jade Whiston, 36, started itching uncontrollably in 2015, which would drive her to ‘dig holes in herself’ and leave her body covered in sores from her incessant scratching.

After doctors dismissed her symptoms as a skin infection for two years, she was finally diagnosed with stage four Hodgkin’s lymphoma in February 2017 after the skin on her chest started to swell.

With the disease already in her lungs and liver, Mrs Whiston – of Pitsea, Essex – immediately started chemotherapy but her cancer continued to spread.

Having exhausted all treatments options on the NHS, Mrs Whiston – who married her husband Vince, 38, last November – is now trying to pay for the drug panobinostat, which is only available for patients with the blood cancer multiple myeloma. 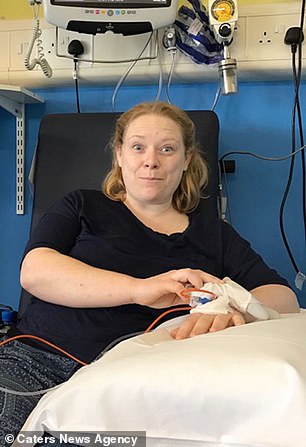 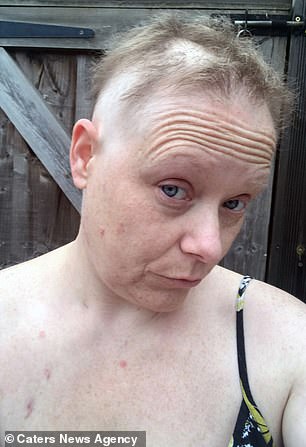 Jade Whiston (pictured left in hospital) battled an ‘unbearable itch’ for two years – which turned out to be cancer. After scratching her skin until it left sores, she was finally diagnosed with stage four Hodgkin’s lymphoma in February 2017. She is pictured right after chemo 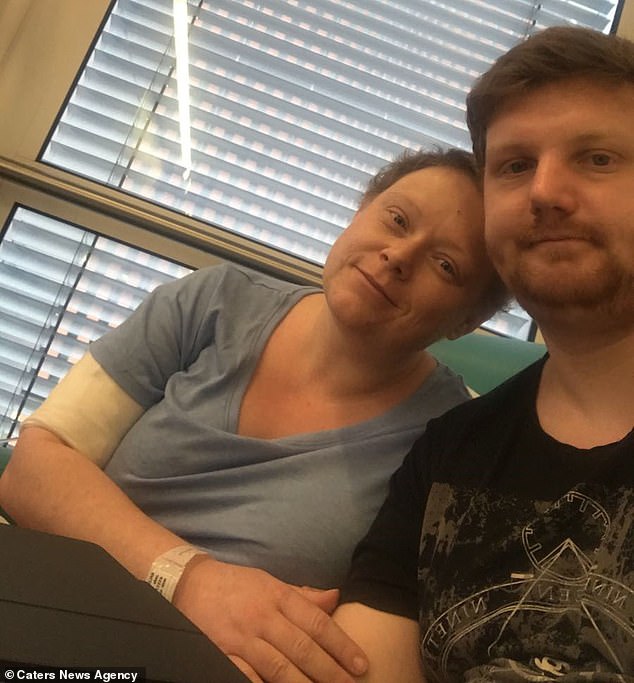 Pictured after she was diagnosed alongside her husband Vince – who she married last November – Mrs Whiston’s itching was dismissed as an infection. She finally had a scan when the skin on her chest swelled. By this time, the cancer was already in her lungs and liver

‘My only option on the NHS is to accept my illness is terminal and to have palliative care.

‘I have so far raised enough for my first cycle of the drug called panobinostat which is 18 tablets.

‘I will have a PET scan after my second cycle mid-March to determine whether this new drug is working.’

Panobinostat is an anti-cancer drug that stops tumour cells multiplying and triggers their ‘suicide’.

It is approved on the NHS for the treatment of relapsed multiple myeloma – a form of blood cancer – in patients who have failed at least two other treatments.

These patients must also take the cancer drugs bortezomib and dexamethasone alongside panobinostat.

Panobinostat is given as an oral drug on days one, three, five, eight, ten and 12 of a three week cycle, including one week rest.

Speaking of when she was told she had cancer, Mrs Whiston said: ‘I was diagnosed at stage four and it had already spread to my lungs and liver back in 2017.

‘I had no idea my itchy skin was a symptom of cancer.’

‘I was scratching so much it was affecting my day-to-day life, I was covered in sores and was digging holes in myself,’ she said.

‘It was unbearable but doctors kept brushing me off and said I must have a skin infection.

‘After being referred to a dermatologist it wasn’t until two years later when the skin on my chest became inflamed that I was given an ultrasound which detected my lympnodes were swollen.

‘Following a biopsy I was finally diagnosed with Hodgkin’s lymphoma, at first I felt relieved after going back and forth for so many years with crippling symptoms.’ 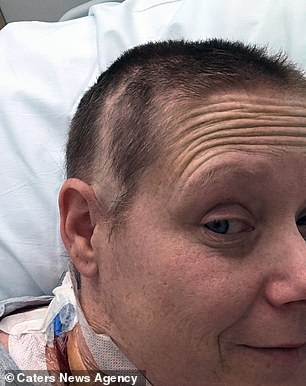 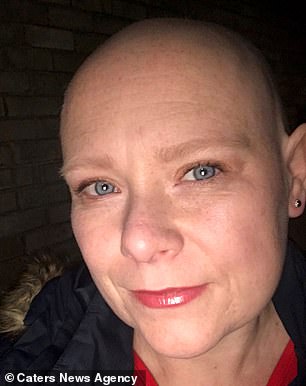 Mrs Whiston (pictured left in hospital and right after chemo) immediately started treatment but several rounds of different types of therapy failed to stop her cancer spreading. She is now fundraising £120,000 for the drug panobinostat, which is not on the NHS for her cancer

Finally armed with a diagnosis, Mrs Whiston endured several rounds of chemo but the treatment did little to stem the spread of her disease.

A scan six months later revealed her cancer was now in her spine, ribs, hip and lymph nodes.

Itchiness usually occurs due to dry skin, an infection or an allergic reaction.

However, it can also be a sign of cancer.

Although it is unclear how some forms of the disease cause itchiness, medics believe it may be due to substances released by the tumour or how the body reacts to the growth.

This itching tends to be all over the body but worse on the legs and chest.

It usually goes away once cancer treatment starts.

But cancer drugs themselves can also cause itchiness, which can be a sign they are working.

To cope – people should limit the numbers of baths they have, apply unscented moisturisers, wear natural fabrics and keep rooms cool.

Keeping nails short also reduces the damage scratching the skin can cause.

‘Every time it seemed I was making progress, scans showed the cancer had multiplied,’ she said.

‘I have only been in remission once in the past two years but I won’t give up.’

Mrs Whiston was referred to the University College Hospital Cancer Centre in London where she was put on a trial comparing a new drug to one already being used by the NHS.

To her despair, she was randomly allocated to receive the drug that was already around, which she failed to respond to.

Mrs Whiston then began yet another round of chemo, which she describes as ‘horrific’.

‘I was in hospital for nine days, and it resulted in me collapsing and having problems with my kidneys,’ she said.

After two days at home, Mrs Whiston was then rushed back to hospital when she developed sepsis.

A scan then revealed the cancer had spread to her liver, abdomen and more areas of her lungs.

Despite all she endured, Mrs Whiston and her now-husband decided to go ahead with their wedding after being in a relationship for 12 years.

‘Vince has supported me at every stage of my cancer journey, we decided to use our savings and get married last year as that’s something we’d always wanted to do,’ she said.

‘We just had close family and friends but it was perfect for us.’ 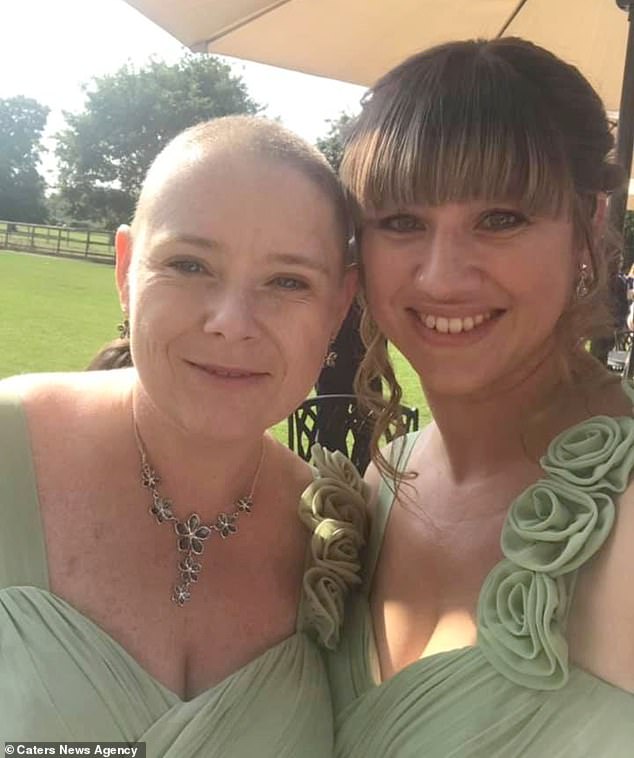 Mrs Whiston – pictured after chemo as a bridesmaid – is desperate to avoid palliative care, and is therefore fundraising ‘to save her own life’. Despite everything, she refuses to give up

Mrs Whiston has launched a fundraising page to help her pay for the expensive treatment and has raised more than £47,000 so far.

She claims she was offered a palliative care package before a nurse she had befriended recommended she try panobinostat.

‘I want to have finished all six cycles of the new drug by mid-March,’ she said.

‘If it doesn’t work I’ll have no choice but to start palliative cancer treatment.

‘I’ve been blown away by the generosity of people so far as we’ve already hit a third of our required total.’

Mrs Whiston is also speaking out to encourage people not ignore warning signs that something may be wrong.

‘I dismissed my awful itchiness as the doctors didn’t think it was anything serious,’ she said.

‘It’s not a usual symptom of Hodgkin’s lymphoma but as it had spread to my liver that’s what caused the itchy skin.’

Intense itching can be a sign of liver problems due to bile ducts becoming blocked, causing bile products to enter the bloodstream and be deposited in the skin.

Mrs Whiston added: ‘I don’t know whether things would have been different if my cancer was diagnosed earlier but I won’t give up, I want to live.’