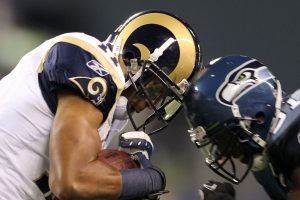 A new study of former National Football League (NFL) players finds that, even decades after retiring from the game, they show heart abnormalities associated with high blood pressure. The issues were most prevalent in those with bigger bodies—think linemen, tight ends, running backs, and the like. It’s the first study to examine how training among elite athletes may affect their hearts long after they’ve left the field.

Training at the professional level changes the size and shape of your heart—it’s what’s known as “athlete’s heart.” For example, the wall of the heart’s left ventricle (one of two chambers of the heart) often increases in thickness—left ventricular hypertrophy, or LVH. Doctors don’t usually consider LVH harmful in athletes, but for the rest of us, LVH is linked with untreated high blood pressure, which is associated with a higher risk of heart disease.

Interestingly, LVH was equally prevalent among those just retired and those who’d been out of the game for 20 or more years. That could mean that the condition doesn’t go away after retirement, or that it returns quickly after the men retired, possibly because of long-term untreated high blood pressure.

“In spite of the fact that these guys were, at one point, incredibly active and in incredibly good cardiovascular shape, down the line they may still end up having some significant cardiovascular abnormalities,” Genevieve Smith, a faculty instructor at Tulane University School of Medicine and the study’s lead author, said in a statement. “What we don’t know is whether the changes we’re seeing later in life are related to the high blood pressure or to the ‘athlete’s heart’ that they had when they were professional players.”

So what’s the lesson for those of us who aren’t former NFL players? Well, it’s a reminder that even elite athletes can have health issues that can go overlooked because everything seems fine. And no matter how physically fit you are, you’ve gotta take care of your heart.