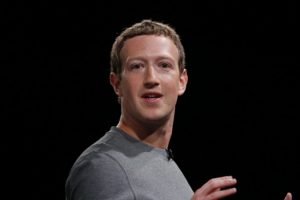 On Sunday, Mark Zuckerberg posted on his social media accounts that he had constructed a "sleep box" for his wife, paediatrician Philippa Chan, to use at night.

Before we continue, it must be clarified that, no, Zuckerberg has not insisted the mother of his two children nod off like a vampire in a coffin. However, what he has done is just as worthy of raised eyebrows.

"Being a mum is hard, and since we've had kids Priscilla has had a hard time sleeping through the night," the Facebook CEO captioned a picture of the wooden box. "She'll wake up and check the time on her phone to see if the kids might wake up soon, but then knowing the time stresses her out and she can't fall back asleep."

Zuckerberg went on to explain that, now, Chan puts her phone in the "sleep box" before she goes to bed.

The box emits a "very faint light" between 6am and 7am, so she knows "it's an okay time for one of [them] to get the kids", but it also won't wake her if she is still sleeping.

So, Mark Zuckerberg has built an apparatus that tells you the time without emiting blue light, or sending you push notifications from your social media accounts, or reminding you of your calendar for the day.

The man has built a clock.

But, he hasn't even really done that. At least a clock shows the time. The sleep box only tells you the time – with a pretty big margin of error – for an hour of the day. What if she wakes up at 7.01am? What then?

"As an engineer, building a device to help my partner sleep better is one of the best ways I can think of to express my love and gratitude," Zuckerberg wrote on his social media accounts.

"A bunch of my friends have told me they'd want something like this, so I'm putting this out there in case another entrepreneur wants to run with this and build sleep boxes for more people!"

If any of Mark Zuckerberg's friends are reading this: 1. G'day, and 2. Buy a wall clock and charge your phone on the other side of your Silicon Valley bedroom which probably has more than one power outlet.

What is perhaps even more strange about the boast post is that the light-emitting clock actually already exists … as a toy for children.

UK singer Lily Allen (truly an unexpected cameo) commented on Zuckerberg's picture, letting him baby product company Gro – known for their infant sleeping bags – sell a clock which lights up like a sun when it is time to get out of bed.

The whole thing somewhat reminiscent of the time Tesla CEO Elon Musk proposed a transport system of stops smaller than subway stations which would be "the size of a single parking space [and] take you very close to your destination [and] blend seamlessly into the fabric of a city".

As social media users pointed out at the time, what Musk had invented there was, in fact, a bus stop.

How does checking our phone during the night affect our sleep?

Of course, there is method in the madness.

Blue light exposure from devices like mobile phones affects our sleep, as Monash University's Associate Professor Sean Cain has previously explained to The Age, in three ways: by suppressing melatonin production, increasing alertness, and upsetting our circadian rhythm (our internal body clock) when our brain confuses this light with the blue light emitted from the sun.

However, Sean Drummond, professor of clinical neuroscience and sleep researcher at Monash University's School of Psychological Sciences, says glancing at your phone occasionally to check the time at night is unlikely to be a big deal.

"The real problem is sustained use of a phone, or any other hand-held device or laptop, at night," he says.

Rather than embarking on a woodwork project, Professor Drummond recommends getting off your device (or using it on night mode) at least 90 minutes before bed. (A television, if you're interested, is less of a problem: it's generally further away from your eyes).

But, ultimately, any form of activity before bed can trigger an alertness that will make it difficult to fall asleep.

"When I was reading the Game of Thrones books, if I read too close to bed time, it relaxed my body, but my mind became like a hamster on a wheel and it made it hard to fall asleep," Professor Drummond recalls. "So, people need to think about what will work for them, specifically, because it might not be what works for their friends or partner."