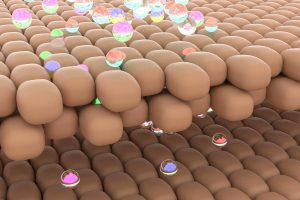 Transdermal drug delivery is an alternative to oral or invasive drug delivery systems. This approach is associated with several advantages including its ability to bypass first-pass metabolism and its non-invasive delivery of drugs that can lead to better patient compliance. 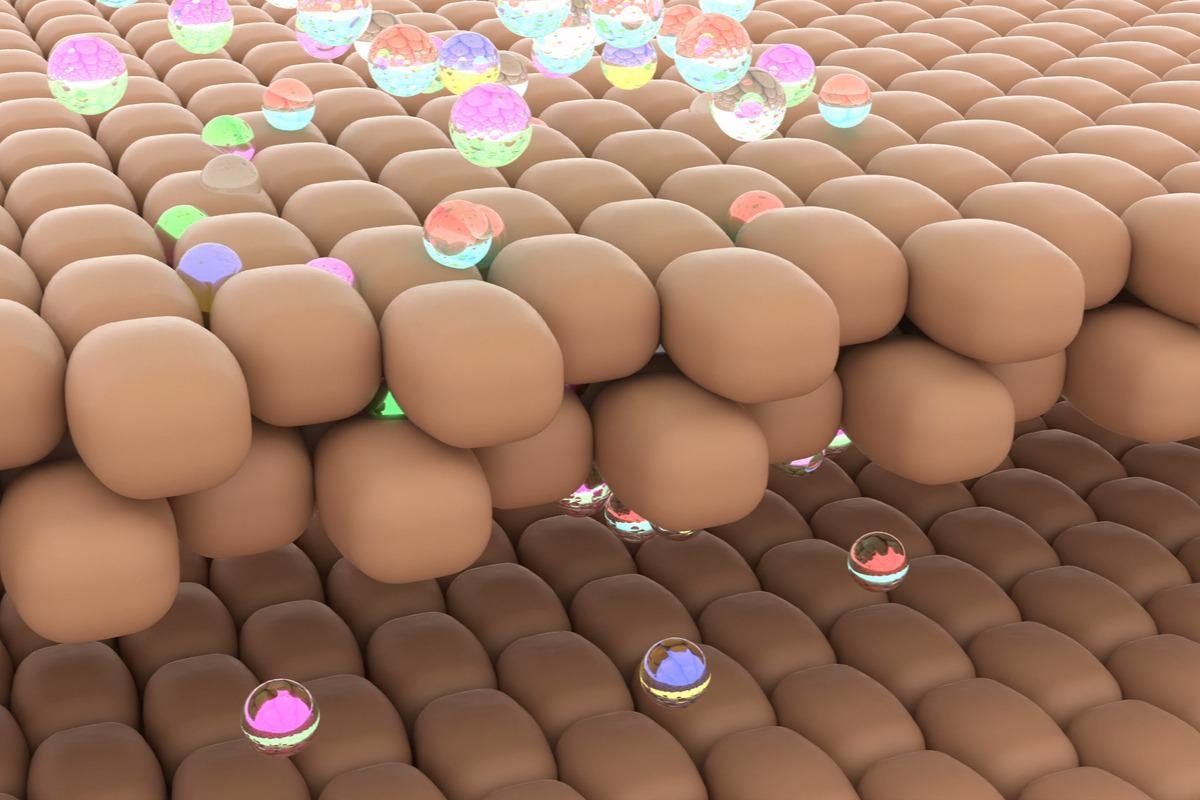 Despite its advantages, transdermal drug delivery is limited to drugs that are strongly hydrophobic with lower molecular mass. Thus, hydrophilic macromolecules like peptides, nucleic acids, and proteins cannot be efficiently delivered by this approach. Transdermal delivery systems for anti-severe acute respiratory syndrome coronavirus 2 (anti-SARS-CoV-2) vaccines are a current area of research.

Several transdermal drug delivery systems have been developed for bio-macromolecules like proteins. However, these systems are associated with several challenges including unsatisfactory efficiency, inability to deliver high molecular weight proteins, and other unwanted effects such as skin damage leading to infections, inability to self-dispense, and complicated manufacturing processes.

A biodegradable natural cationic polymer known as chitosan (CS) possesses mucoadhesive and antibiotic properties. In particular, fluorocarbon modified CS (FCS) has demonstrated efficient transmucosal delivery of drugs, which led researchers in a recent Research Square* preprint to assess the efficacy of this system for the development of SARS-CoV-2 vaccines and tumor immunotherapy. The paper is under consideration in Nature Portfolio Journal.

In the current study, nanocomplexes were formed by mixing FCS with ovalbumin (OVA) and immunoglobulin G (IgG) to create FCS/IgG and FCS/OVA, respectively. The structure and activity of IgG and OVA remained nearly unchanged after forming nanocomplexes with FCS.

The transdermal delivery of the FCS/IgG and FCS/OVA were confirmed. Both the nanocomplexes showed highest penetration ability in the skin at a 1:1 mass ratio.

The mechanisms underlying the intercellular transdermal delivery of these nanoparticles were studied by using a monolayer of human skin dermis HACAT cells, wherein the researchers monitored the transepithelial electrical resistance (TEER) across its two sides. The addition of FCS/IgG temporarily opened the tight junctions and enlarged the intercellular spaces.

The researchers then assessed the transappendageal route of transdermal drug delivery, which is important in the transport of water-soluble macromolecules across sebaceous glands, hair follicles, and sweat glands. This route was found to play an essential role in the transdermal delivery of FCS-based nanoparticles.

An ‘antibody FCS complex/radioisotope125 labeled IgG (125I-IgG) or FCS/125 I-IgG cream formulation was topically applied on mice melanoma tumors to quantify transmitted antibodies at different time intervals. A continuous transmission and even distribution of antibodies in the tumor was observed.

To study the immune activation mechanism of transdermally delivered immunotherapy, tumors from different groups were collected and analyzed on day 12. The FCS/aPDL treated group revealed an increased percentage of CD4+ and CD8+ T-cells. 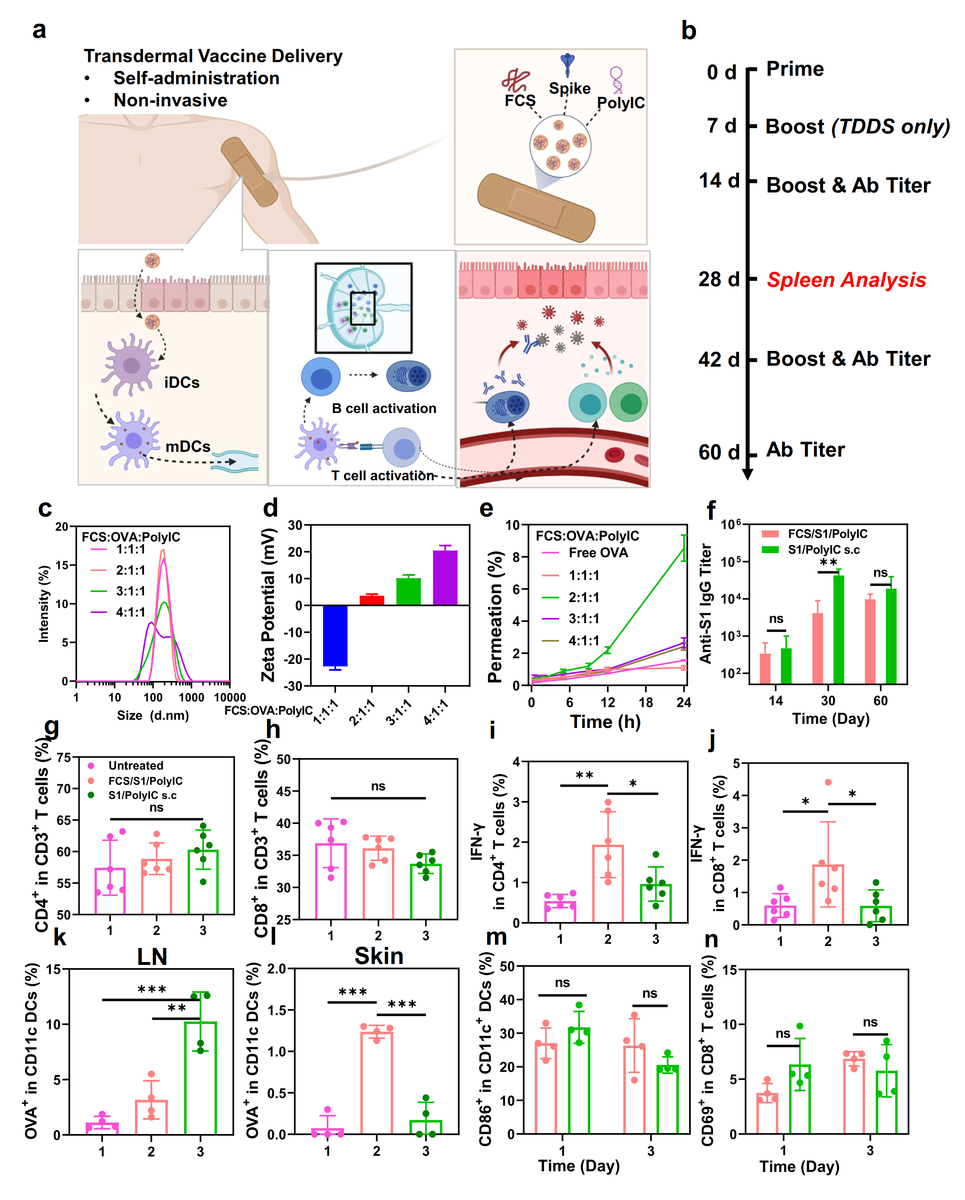 The CD8+ T-cell activity was analyzed using granzyme B, Ki67, and interferon g (IFN-g). An effective infiltration and activation of T-cells marked by elevated levels of all three markers were found in the FCS/aPDL treated group.

Infiltration of CD4+ and CD8+ T-cells, as well as the expression of the three aforementioned biomarkers, remained unchanged in mice treated with IV aPDL1 and transdermal CS/aPDL1 transdermal. It was thus inferred that transdermally delivered FCS/aPDL resulted in an increased antitumor immune response.

Next, FCS-based transdermal SARS-CoV-2 vaccine was synthesized (FCS/S1/PolyIC). OVA was used as an antigen, with the FCS:antigen:PolyIC ratio optimized in the vaccine. FCS/OVA/PolyIC at a 2:1:1 mass ratio with a relatively small size revealed the highest skin penetrability and was further studied.

Cell immunity was assessed by evaluating the spleen of all mice for cytotoxic T-cells 28 days after primeval administration. To this end, CD4+ and CD8+ T-cell infiltration were similar in all groups.

IFN-g secretion by T-cells and the percentage of the memory T-cells was substantially increased in transdermally delivered FCS/S1/PolyIC. This indicates a stronger T-cell response and long-term immune memory effect as compared to the subcutaneously injected S1/PolyIC.

The exact permeation ability of the vaccines was measured using Cy5.5 labeled OVA as antigen by measuring the antigen accumulation in the lymph nodes after 24 hours of vaccine administration. Lower OVA retention was found in mice that received transdermally delivered FCS/S1/PolyIC

Comparatively, after the subcutaneous injection, the antigen and adjuvant migrate separately to lymph nodes and are more prone to depletion by non-specific immune cells, thus indicating a less efficient activation of DCs.

Taken together, the current study demonstrates that the FCS-based transdermal delivery system is efficient in delivering biomacromolecules, which expands the potential range of topically administered therapeutics.

Research Square publishes preliminary scientific reports that are not peer-reviewed and, therefore, should not be regarded as conclusive, guide clinical practice/health-related behavior, or treated as established information.

I am a medical content writer and editor. My interests lie in public health awareness and medical communication. I have worked as a clinical dentist and as a consultant research writer in an Indian medical publishing house. It is my constant endeavor is to update knowledge on newer treatment modalities relating to various medical fields. I have also aided in proofreading and publication of manuscripts in accredited medical journals. I like to sketch, read and listen to music in my leisure time.