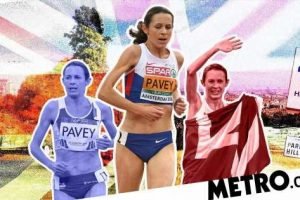 ‘Another run I enjoyed was to combine Hampton Court Park with Bushy Park.

‘Look out for the Parakeets – they’re there all year round – but give any red deer stags a wide berth during the rutting season, which is September – October.’

‘Hampstead Heath is a lovely place to run in this part of London,’ says Jo.

‘Parliament Hill is often the host to big cross country races and it’s amazing to have this terrain combined with views right across the city.

‘I love running here and whenever I’m in this part of London I try and get a run in.

‘I normally enter Hampstead Heath near the Parliament Hill Athletics Track. You can then head around the perimeter of the park but it’s also nice to vary the route and head along some of the many paths that criss cross the park.

‘I have also done a hill session here before and it’s a fantastic setting with the extensive views across London including Canary Wharf, the Shard and St Pauls Cathedral.

‘Hampstead Heath has trails through open fields, woodland and there are lots of up and downs along the way. You can also link this run with a detour into Highgate Woods.

‘Another brilliant area for running in North East London is Epping Forest. This is an extensive woodland near Loughton. It’s in Essex but lies inside the M25.

‘At nearly 6000 acres there are many routes to choose from. The forest is only about two miles or so wide, but twelve miles in length and so it allows you to run a long loop.

‘Even though it’s a forest there are also areas of open grassland.

‘As well as runners you’ll see lots of horse riders and mountain bikers.’

‘Hyde Park is a great place to get a run in if you’re in central London. Most of the routes are tarmac, but it’s a nice little loop if you want to escape the pavements.

‘The park is slightly sloping, but there no steep hills. For your shorter, sharper efforts, I would go for the two-mile loop of the Serpentine.

‘Victoria Park is quite a busy park but a nice run. It’s just under 5K a loop, so you can get a short 5K run done here, or do a couple of loops to go further. It’s very picturesque with the Chinese Pagoda, boating lake, etc. It’s also pretty flat.

‘I have run the Regent Canal a few times. It’s a nice peaceful run and I love running along waterways. The best starting point is probably near Limehouse Station. You can run up to about 15K here.’

‘Dollis Valley Green Walk is an amazing long run route to follow if you are training for bigger events such as the London Marathon.

‘If you follow it to the book, it will be a simple case following the walk route, (look for the green discs and the wooden finger posts). By doing this you will experience a great combination of woods, fields, great views and the added bonus of seeing some cute farm animals.

‘Golders Hill Park is another great location for shorter efforts, I have run here a few times as part of my visits to Hampstead.

‘Given its location, perhaps unsurprisingly there are quite a few small climbs that will get your heart rate going.

‘It is roughly a two-mile effort around the perimeter and can easily be built up to 5K if you add a sprint through the middle of the park. There is also a free zoo which is great if you’re running here with your kids.’

The London Marathon is on Sunday 28 April.

MORE: Two-in-one fitness classes could be the most effective way to work out

MORE: Study debunks the sleep myths that are wrecking your health

MORE: People tell us all the horrible ways they’ve been evicted

The daily lifestyle email from Metro.co.uk.