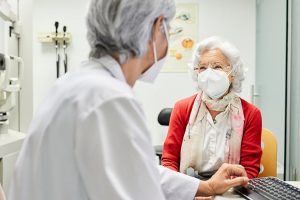 Many oncologists are still not using formal geriatric assessments (GA) for elderly patients with cancer, even though such assessments are backed by strong evidence and widely recommended in clinical guidelines.

The latest study to point out the problem is a survey of 394 mostly community-practice oncologists, which found that 60% did not use formal GA to inform treatment decisions for any of their older patients with cancer.

Respondents said the main reasons for not using GA is that they are “too cumbersome” (44% of respondents) and that they “add no value” (36%). Many also said they add “additional time to the office visit that my clinic schedule does not permit.”

The study was published in the July 1 issue of JCO Oncology Practice.

These findings echo similar findings from a previous study of mainly academic oncology providers. Together they show that, despite the evidence to support GA, “most oncologists are nonadherent in caring for their older adults,” writes  William Dale, MD, PhD, a geriatrician and palliative medicine physician at the City of Hope National Medical Center, Duarte, California, in an accompanying editorial.

Geriatric assessments “have now been shown to better predict the likelihood of toxicities from chemotherapy, to prognosticate regarding noncancer mortality, and to guide interventions for improving outcomes,” he points out. “When GA is combined with multidisciplinary interventions, large, randomized studies have proven that toxicities are minimized” without “compromising mortality,” he added.

“For these reasons, the use of GA is considered the standard of care in guidelines, including [the American Society of Clinical Oncology’s] current guidelines for treating older adults with cancer,” he points out.

Identify Problems That May Be Missed

Previous studies have shown that instruments such as the Comprehensive Geriatric Assessment, the Cancer and Aging Research Group toxicity tool, and the Chemotherapy Risk Assessment Scale for High-Age Patients are able to identify problems missed on routine histories and physicals, such as falls, depression, malnutrition, and other issues.

Not using such tools “may compromise clinical outcomes and the quality of life in older adults,” say the study investigators. The team was led by Ajeet Gajra, MD, now a hematologist/oncologist at the Hematology-Oncology Associates of Central New York (at Cardinal Health when the study was published).

As for being too cumbersome, the team said office staff could work with patients to fill out the forms before clinic visits. They also call for an education campaign to raise physician awareness of the value of formal assessments and suggested linking assessments to quality-of-care metrics with financial incentives to use them.

Some Oncologists Unaware of GA

The study was prompted by a recent report — led by Dale — that among 1277 primarily academic oncologists, over half rarely or never perform geriatric assessments using validated tools. Since the majority of patients receive cancer care in community settings, the researchers were curious about uptake among community oncologists.

In the survey they conducted, 75% of the 349 oncologists they surveyed were community based, practicing in clinics across the United States. They were paid for their time, so the response rate was 100%.

The survey found that more than half (60%) of the respondents did not use a formal GA for their older patients with cancer.

Instead, respondents rely on the Eastern Cooperative Group performance status (86%) and comorbidities (73%) to guide treatment decisions even though they “have been shown to be very poor predictors of outcomes such as toxicities when compared with the GA,” Dale commented.

Notably, 19% of oncologists said they were not aware of any validated geriatric assessments.

Just over half of oncologists with 10 or fewer years of practice reported using geriatric assessments vs less than 37% of oncologists in practice for more than 10 years.

No funding source was reported. Gajra and Dale report no disclosures; the senior study author is a consultant for Pfizer and Genentech.

M. Alexander Otto is a physician assistant with a master’s degree in medical science and a journalism degree from Newhouse. He is an award-winning medical journalist who worked for several major news outlets before joining Medscape and is also an MIT Knight Science Journalism fellow. Email: [email protected]